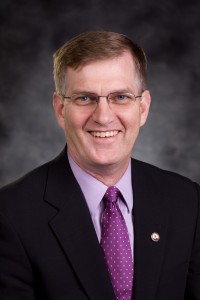 MADISON, Wis. – Mark A. Nook has been named Senior Vice President for Academic and Student Affairs for the University of Wisconsin System.

“Mark brings a unique blend of leadership skills and expertise to this vital position,” Reilly said. “He understands the complex issues of managing a public university system in today’s challenging environment. In his work with Regents, Chancellors, Provosts, faculty leaders, and other UW colleagues, Mark is able to translate raw data into meaningful insights, helping inform a host of important policy decisions. In presentations to the Board of Regents, the state legislature, and others, he’s earned respect as a credible authority on academic issues and student concerns, and as a champion of a quality education for all students.”

“We continue to work on ways to increase the efficiency and effectiveness of our teaching, research, and service, with a goal of enhancing Wisconsin’s workforce and its economic vitality,” Reilly said. “Mark’s familiarity with our strategic planning process and performance metrics will be a great asset to our universities and colleges.”

“Higher education in this country is changing rapidly and in significant ways. I am honored to work with colleagues throughout the UW System to embrace that change, striving to meet the evolving needs of our students, our state and the nation with a renewed commitment to the Wisconsin Idea,” Nook said.

Nook was named Provost and Vice Chancellor at UW-Stevens Point in 2007, later serving as the university’s Interim Chancellor from 2009 to 2010. He began his academic career in 1990 as an assistant professor at St. Cloud State University, serving as Chair of the Department of Physics, Astronomy, and Engineering Science for five years, and as Dean of Undergraduate Studies from 2004 to 2007.

Nook earned his Ph.D. in Astronomy at UW-Madison. He holds a master’s degree in Astrophysics from Iowa State University, and an undergraduate degree from Southwest Minnesota State University.