MADISON-The University of Wisconsin System will step up what it does to improve public health in Wisconsin following Friday’s Board of Regents’ approval of a name change to reflect a broader mission for the UW Medical School.

The UW-Madison school will be known as the School of Medicine and Public Health effective Nov. 11, pending Regent review of a report on collaborations with agencies in the Milwaukee area. The name change is part of a decade-long process to expand the school’s public-health mission.

In approving the name change on Friday, Regents included a provision, championed by Regent Danae Davis of Milwaukee, to ensure the UW-Madison school is responsive to the health-care needs of citizens in the state’s largest city. The Board will require that UW-Madison officials initiate a “good faith” dialogue with officials in the city of Milwaukee and the Chancellor of UW-Milwaukee, Carlos Santiago, toward future collaborations on public health education, research and service.

That requirement followed Thursday’s testimony to the Board from Milwaukee Mayor Tom Barrett and State Senator Lena Taylor, who offered emotional accounts of health-care needs in Milwaukee. They had asked the Board to consider locating a school of public health in Milwaukee instead of Madison.

“I hope this will be seen as an honest attempt for the UW Medical School to have more of a presence in Milwaukee,” Regent Michael Spector of Milwaukee said on Friday. “People in those communities are most affected by the health problems and must see that the university cares.”

As part of the dialogue, the Board also directed those officials to consider the merits of establishing a Milwaukee branch of the UW School of Medicine and Public Health, and reiterated the understanding that the UW Medical School would not object to a future Ph.D. program in public health at UW-Milwaukee.

“We are telling Milwaukee that we are here to help,” said Regent Chuck Pruitt of Milwaukee. “It is critical that we look wherever we can to do more.”

The School of Medicine and Public Health is part of a long-term plan to meet public health needs in Wisconsin. In 1999, the state insurance commissioner granted the UW Medical School and the Medical College of Wisconsin approximately $300 million each in proceeds from the sale of Blue Cross/Blue Shield United of Wisconsin. The funds must be used for public health purposes, as outlined by the Wisconsin Partnership Fund for a Healthy Future. The Board of Regents in 2003 approved a five-year strategic plan for the use of this funding, which included the expanded mission of the UW Medical School.

During Friday’s deliberations, Eileen Smith, director of the Wisconsin Partnership Fund, clarified that the Board has a liaison to, and appoints several members of, the Oversight and Advisory Committee that directs the use of the public health funds through what will be the School of Medicine and Public Health. Smith also reminded the Board that a UWM dean, Randy Lambrecht, serves as a community representative on a similar oversight board for the use of the funds through the Medical College of Wisconsin, which must also fulfill public health needs with its share of the funding.

“A focus on Milwaukee is important to both of us,” Smith said, adding that the UW is also very interested in statewide programming.

In response to questions from Regent Gerard Randall of Milwaukee, who wondered Thursday about the demographics and background of students in the UW Medical School, Dean Philip Farrell said the school in Madison leads the nation in terms of minority students who enter and graduate.

“We’re proud of that record, but we’re not satisfied,” Farrell said. “We anticipate doing more.”

Regent Roger Axtell of Janesville encouraged his fellow Regents to move forward with the name change, saying that delaying a vote on the request could foster more divisiveness.

“In my six years on the Board, it has been rare to have this type of spirited discussion, sometimes heated,” Axtell said. “I’m proud of that conversation, and our decision.”

“This isn’t about a name, it’s about being responsive to a city that has reached out to us for help with their problems,” added Regent President David Walsh of Madison. “I’ll personally make sure that we will are responsive to the health-care needs of Milwaukee.” 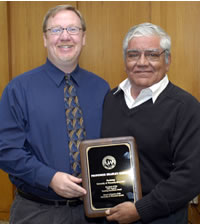 In what the Board celebrated as a “happy task,” Regents honored two UW professors and one academic department on Friday for excellence in teaching.

As in previous years, Davis said the winners stood out from a pool of highly qualified candidates.

“I think all of us in this room understand what a valuable resource we have in our faculty and academic staff, who teach day in and day out with dedication, creativity and passion; and to whom we entrust the education and enlightenment of the citizens of the future,” Davis said. “The members of the UW community we honor today are shining examples of the ability that excellent teachers have to change students’ lives.” 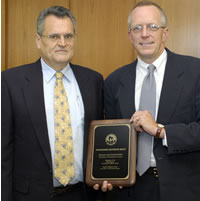 Regent Jesus Salas of Milwaukee introduced Bradley Caskey, a UW-River Falls professor of psychology, by sharing the words of a colleague who called Caskey a “master teacher.” Salas said Caskey’s accomplishments would qualify him to be addressed in Spanish as “maestro,” a title reserved for teachers at the peak of their professions.

Caskey said much of his teaching success is due to his passion for classroom teaching, and his belief that learning should be engaging and fun. He said he was grateful for the recognition because it honored the work of teachers at campuses like UW-River Falls, where, he said, “teaching is what we do.”

“The worth of an award is directly related to the competition you’re up against,” Caskey said. “The competition here is unbelievable.”

Regent Chuck Pruitt of Milwaukee said Kenneth Maly, a professor of philosophy and environmental studies at UW-La Crosse, earned his award in part for continued and outstanding creativity, including teaching 28 new courses in 26 years of teaching.

“That is remarkable innovation, and his students are the beneficiaries of it,” Pruitt said. “By all accounts, his impact has been phenomenal.” 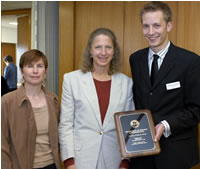 Maly said the award was special to him because it honored the teaching profession, a rare honor in today’s day and age. Maly encouraged the Board to continue to recognize faculty of “good stock and high performance,” and said he hoped the university would undergo major changes toward collaborative teaching and learning in the next several years.

“It is only when we in higher education are open to all ideas and critical debate that we are responsible citizens,” he said.

Student Regent Chris Semenas of Kenosha presented the award for departmental excellence to the UW-Oshkosh Department of Biology and Microbiology, and praised its work for preparing students to make major contributions.

“And in the end, that is what the department is creating: scientists who are passionate about their discipline and who communicate that passion well” Semenas said. “There can be no doubt in anyone’s mind that this Department is truly exceptional.”

“Our students see first-hand the principles of the Wisconsin Idea,” she said.

As part of his “Good News” report to the Board, UW System President Kevin P. Reilly said Friday that UW-Madison received very good news when the National Institutes of Health announced that it will locate the federal government’s first and only National Stem Cell Bank at Madison’s WiCell Research Institute.

“The selection is a tribute to the world-class research talent and collaborative spirit at UW-Madison, and is another example of why, by almost any measure, UW-Madison is consistently recognized as among the top research universities in the nation,” Reilly said.

Reilly introduced Dr. Derek Hei, who outlined for the Board how WiCell will use a $16 million, four-year grant to administer the National Stem Cell Bank.

“It’s a great opportunity for us as a university and as a state to maintain our leadership and lay the pathway for stem-cell therapies to treat horrendous diseases,” Hei said.

The bank will maintain stem-cell lines President Bush has approved for federally funded research, and will share the lines with other academic scientists at reduced costs, Hei said.

Science and discovery will benefit from this recognition and responsibility, but so will Wisconsin’s health and quality of life,” Reilly said. “This is absolutely central to our mission as a public university, and I wish all those involved the best of success.”

Reilly reminded the Board that UW-Milwaukee College of Nursing is marking its 40th anniversary by celebrating the role its students and staff play in providing strong nursing education and promoting health in the Milwaukee community.

In addition, Reilly told Regents that UW-La Crosse was among 12 four-year universities found in a recent study by the American Association of State Colleges and Universities to achieved above-average student retention and graduation rates by emphasizing student success.

Reilly said the AASCU study found several common denominators at these universities, including a campus-wide attitude that all students can succeed, a sense of inclusiveness throughout the campus community, and a distinctive campus institutional mission. Reilly added that the study found high expectations also mean mutual expectations.

“At universities like UW-La Crosse, students are expected to succeed, and in turn, students expect the campus to provide the support they need,” Reilly said. “Congratulations to Chancellor [Doug] Hastad, students, and staff at UW-La Crosse for setting a first-class example of how to achieve student success.”

Regent President David Walsh told fellow Regents that he has been communicating with members of the Wisconsin State Legislature and other university stakeholders about updating the UW System’s policies on employee discipline. Walsh said the university’s personnel policies balance responsibilities of academic freedom and shared governance, but that lessons can be learned from recent personnel aberrations.

Walsh said he would appoint a committee of Regents and Chancellors to recommend changes to current disciplinary processes, which may require changes in state statute.

“I don’t want to overreact, but I want to send clear messages to the public that we take these situations seriously,” Walsh said. “We need to start this process to tell the public we will fix that which is broken.”

In addition, the Board heard a report from Regent Eileen Connolly-Keesler of Oshkosh, who reviewed several suggestions for improving the effectiveness of Board meetings, including moving to a schedule of fewer meetings per year that focus on issues, not reports. The Board will consider the suggestions in more detail at its November meeting.

Board approves updates to personnel policies and practices

As part of addressing employment policies and practices within the UW System, the full Board on Friday approved a resolution that will require UW System employees to provide a health professional’s certification when taking more than five days of sick leave.

Business and Finance Committee Chair Chuck Pruitt reported that the measure matches policies often found in the private sector. Regent Elizabeth Burmaster of Madison noted that representatives of UW-Milwaukee and UW-River Falls told the Education Committee on Thursday that current policies were effective and fair, and that requiring a health professionals’ certification could place a financial burden on employees.

The full Board also approved seven measures recommended by UW System President Kevin P. Reilly to strengthen audit-related reporting relationships in the UW System. Those included officially designating the Board’s Business and Finance Committee as the audit committee of the Board of Regents, and designating the Vice Chair of the Committee as the audit liaison. The Board will also ensure UW auditors are guaranteed unfettered access to the Board and/or the President. Changing the name to the Business, Finance, and Audit Committee will require a change to the Board’s bylaws.

In other business, the full Board:

The Board of Regents will hold its next meeting Thursday and Friday, Nov. 10-11, 2005, on the UW-Madison campus.