University of Wisconsin System Board of Regents News Summary 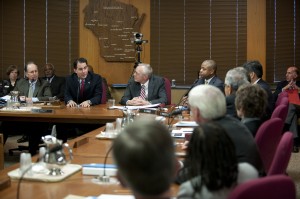 MADISON –Wisconsin Governor-elect Scott Walker told the University of Wisconsin System Board of Regents on Thursday that he will be calling on the “innovation and creativity” of UW to help the state face the serious challenges that lie ahead.

“Great challenges bring great opportunities,” Walker said, appearing before the Board two days after his election victory.  “It’s not always going to be easy. But I know, particularly when I think about higher education, when I think about all the campuses I visited, all the innovation and creativity we see within our campuses and within our system, I’m going to be calling on you to help me out.”

Walker said that his administration will push forward to meet his campaign promise of growing 250,000 more jobs in the state – a goal which aligns with UW System’s Research to Jobs initiative. He said that UW System campuses will be part of his focus on economic development, ensuring that “each and every time we bring in someone to talk about jobs … that we have that campus, we have our technical schools, and we have others involved in higher education right at the table. I think that’s a valuable, powerful asset to would-be employers in this state.”

With the state facing a projected $2.7 billion deficit, however, Walker said that finding ways for the state and the university to meet their goals “isn’t always about more money.” 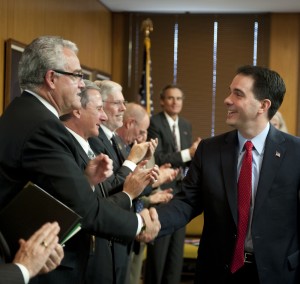 “It’s about finding ways to take what we have, and finding ways with flexibility, with innovation and creativity, to apply those dollars in the best way possible to meet those goals on campus by campus across the state,” said Walker.

In welcoming the Governor-elect, Regent President Chuck Pruitt acknowledged that virtually all the current Board members had been appointed by Walker’s predecessor, Gov. Jim Doyle. “But when all of us walk through this door, we cease being Democrats or Republicans. We instead become Regents of what we think is the finest public university system in America,” Pruitt said.

Pruitt told Walker the University looks forward to working with him. “We can be your partner in growing our economy by serving as a catalyst and an economic engine,” he said.

The Board presented a special resolution of appreciation for the LZ Lambeau event in May 2010, which welcomed home Wisconsin’s Vietnam-era veterans. 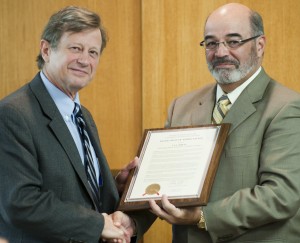 “LZ Lambeau was like no other event held before in the country. It is now being emulated by other states as an important way to pay tribute not only to the service and sacrifice of our country’s Vietnam-era veterans, but for all veterans,” said Regent Michael Falbo, a U.S. Army veteran who served as a combat medic in Vietnam.

Falbo recognized representatives from several organizations that sponsored LZ Lambeau, including James Steinbach and Jon Miskowski from Wisconsin Public Television; Ken Black, Secretary of the Wisconsin Department of Veterans Affairs; and Ellsworth Brown, Director of the Wisconsin Historical Society. Also recognized were Malcolm Brett from UW-Extension, and Gene Purcell from the Educational Communications Board, as well as WPT photographer Jim Gill, who created a travelling exhibit of veteran portraits.

As part of the presentation, Regents viewed a brief video:

Reilly also called Regents’ attention to the new Veterans Wisconsin Education Portal – a joint venture of UW System, UW-Extension, and the Wisconsin Technical College System. The new site is designed to help returning veterans transition smoothly to college life, by providing a single point-of-entry to all the resources, services, and benefits available to them through the UW and Technical College systems.

“Taking the first step to engage in post-secondary education is often the most difficult, so this new portal should make the process easier,” Reilly said.

Board examines data, myths about brain drain/brain gain in Wisconsin

With several recent polls suggesting that a majority of Wisconsin residents believe that the state’s “best and brightest” graduates are leaving Wisconsin to work elsewhere, the Board spent much of Thursday morning examining the truth and misperceptions behind the poll numbers.

“When we see that anecdotes and hearsay are starting to sway the public debate about higher education, or when we see a collection of people’s opinions being represented as reality, we have an obligation to educate and inform our citizens about the facts,” Regent President Pruitt said.

UW System President Reilly reminded the Board that as the UW System works to produce an additional 80,000 new UW degree-holders by 2025, as part of its More Graduates initiative, policymakers and citizens must be assured that their investments in the UW are providing positive returns to Wisconsin.

Heather Kim, Associate Vice President for UW System’s Office of Policy Analysis and Research (OPAR), told Regents that Wisconsin does relatively well at retaining college graduates. She presented data indicating that 81% of students who start out as Wisconsin residents stay in Wisconsin.  Overall, 67% of alumni remained in Wisconsin.

UW also serves as a “brain gain” magnet, with 13% of students who start as non-residents choosing to stay in Wisconsin after graduation.

Kim noted that more work needs to be done to attract college graduates from other states. To do that, the state needs to create more better-paying jobs and build stronger, attractive communities where more college graduates would want to remain and work.

Kim discussed differences in retention rates by institution and by academic discipline. UW-Milwaukee and UW-River Falls posted the highest overall retention rates for resident students (92% and 90%, respectively). UW-Madison has the lowest retention rate at 69%.

By discipline, graduates from education and health professions fields remain in Wisconsin at the highest rates (86% and 84%, respectively), while about 71% of engineering alumni remain.

Regent Danae Davis suggested that the Board should discuss strategies on how to change public misperceptions about the state’s “best and brightest” leaving the state. “It can become self-fulfilling unless we aggressively try to change it,” Davis said.

Regent Mike Falbo noted that to address those areas where the supply of UW graduates exceeds job demand, “As a Board and as a System and at every level, we need to partner up in that effort” to build additional opportunities.

Offering a different perspective based on conversations with executives of national or global companies, Chancellor Rick Wells of UW-Oshkosh cautioned that it may be shortsighted to focus too heavily on encouraging students to stay in Wisconsin after graduation. He said executives cited reluctance to move as a block to career advancement.

Student Regent Aaron Wingad told the Board that he plans to leave the state after he graduates from UW-Eau Claire not because “Wisconsin is boring,” but rather because his next opportunity is elsewhere.

Reilly pointed out that regardless of where they live and work after graduation, many UW alumni continue to make a positive impact regionally, nationally, and globally, whether in their chosen professions or as supporters and advocates for Wisconsin and UW.

Regent Jessica Schwalenberg, a student at UW-Milwaukee, said that people need both “roots and wings” to be successful.

State Superintendent (and Regent) Tony Evers and the Wisconsin Department of Public Instruction (DPI) joined many other states in formally adopting the Common Core State Standards for English language arts and mathematics in June 2010. These standards are designed to provide comparable expectations across districts and states, and establish clear and consistent goals for what students are expected to learn in grades K-12.

“There are certain competencies that go along with our academic work that need to be consistent across the country,” Evers said. “It also sends the message that we need to have higher expectations for kids.”

The initiative – a state-led effort – is a direct response to growing national consensus that shared and more rigorous educational standards will help ensure that all students, regardless of where they live, have access to high-quality education and are ready for college and/or the workforce after high school.

Reilly reiterated that UW believes in shared responsibility and understands that higher education and the PK-12 parts of the education pipeline are interdependent. “The success of the UW System’s More Graduates for Wisconsin initiative depends heavily on the readiness of the state’s high school population to come into post-secondary institutions and do college-level work. In turn, that readiness depends in no small part on the quality of the teachers prepared by UW institutions. We are inextricably linked,” Reilly said.

Paul Sandrock, DPI’s assistant director, provided Regents with an overview of the content and rationale for the new standards.  Francine Tompkins, Director of UW System’s PK-16 Initiatives, addressed evolving assessment practices and methods to link teacher performance with student learning outcomes. She told Regents that the pilot phase for the UW System’s Student Teaching Assessment of Content Knowledge (STACK) will be completed in spring 2011.

After hearing the presentation, Regent Betty Womack said she was pleased with the positive correlation between teacher effectiveness and student learning.  She expressed concern, however, that unless the capacity of the entire system to deliver on the Core Standards is assessed, existing success gaps based on race, class, or disability could be widened.

Regent Danae Davis wondered about accountability. “Who’s making sure any of these initiatives are moving the needle?” she asked. She also recommended more community involvement in the process, ensuring that “all voices working on these issues are ‘under the tent’ as we progress.”

UW System Vice President Rebecca Martin noted that the Common Core Standards being discussed and the University’s own Shared Learning Outcomes share significant common goals, including critical thinking, problem solving, and communication skills. “I think this has the potential to make a real difference,” she said.

The UW System Board of Regents’ next meeting will be held December 9-10, 2010,
hosted by UW-Madison.