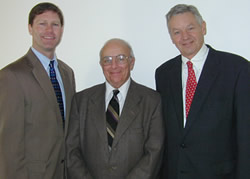 U.S. Reps. Ron Kind (left) and Tom Petri (right) spoke to the Board of Regents Friday about their work on the reauthorization of the Higher Education Act. They are pictured with Regent President Toby Marcovich of Superior.

Access and affordability are among the top priorities as Congress works to reauthorize the federal government’s blueprint for higher education, two Wisconsin congressmen told the University of Wisconsin System Board of Regents on Friday (Dec. 5.)

U.S. Reps. Tom Petri (R-Fond du Lac), and Ron Kind (D-La Crosse) told the board that their work on the reauthorization of the Higher Education Act is intended to help alleviate some of the fiscal pressure universities are experiencing as a result of budget cuts.

“There is no greater priority from my perspective than talking about access and affordability,” Kind said.

Both representatives are members of the House Committee on Education and the Workforce, which is drafting the reauthorization of the Higher Education Act. Petri is the committee’s vice chair.

Kind said he has heard a great deal of feedback in opposition to a proposal from Rep. Howard “Buck” McKeon, (R-Calif.), that would withhold federal financial aid from colleges and universities that raise tuition by more than twice the rate of inflation. Kind said he has helped introduce an alternative proposal that would instead offer incentives to states that “hold harmless” students by more fully funding higher education.

“There are a lot of factors that are driving what we see now,” Kind said.

Kind also noted that for the first time in 10 years, Congress is expected to freeze the level of funding provided by Pell grants for the next fiscal year. Regent Peggy Rosenzweig of Wauwatosa asked if public outcry may be able to influence a change in that plan, but Kind said the decision is almost certain to be voted on when the House returns to session next week.

Petri said the House is forwarding the Higher Education Act as seven separate bills, which has allowed them to devote more attention to the provisions. He said the House has already passed four of the seven bills, while the Senate is expected to pass the measures as one package.

Petri added that he continues to work toward changing the rules that govern eligibility for funding under the TRIO program. TRIO provides federal funds to help minority, disadvantaged and first-generation students, many of whom start at the UW Colleges’ freshman-sophomore campuses before transferring to a four-year campus.

Current interpretation of federal law considers the UW Colleges one institution—even though it has 13 campuses-—because it has a single chancellor and centralized financial aid processing. This means the UW Colleges receives only one TRIO grant, and only 27 percent of eligible students get funding from the student support services portion of the program.

Petri also said he is interested in loosening accreditation of higher education institutions, which can sometimes be overly burdensome.

“Some people think accreditation is linked to quality, that it’s a “Good Housekeeping Seal of Approval,” but it’s not,” Petri said. “It is sometimes used strategically, even by administrators, to “shoehorn” boards.”

Regent Fred Mohs of Madison confirmed that UW campuses have struggled with certain accreditation mandates and welcomed changes at the federal level.

“Every chancellor, I’m sure, has stories in which accreditation has become counterproductive,” Mohs said.

UW-Madison Chancellor John Wiley agreed that while some specialized accreditation programs do cause difficulty, the regional accreditation process that takes place every 10 years is a “useful and helpful” exercise.

Petri said the work to allow states to establish their own accreditation standards is in progress and has allowed for productive conversation on the issue.

Regent Vice President David Walsh of Madison said an overall increased reliance on loans instead of grants for financial aid may be contributing to dropping numbers of UW students from low-income families.

“It seems the culture in Wisconsin and the Midwest is not to take on a lot of debt,” Walsh said. “I sense a disconnect between Washington and our state on this.”

Kind said the example illustrates the need for improved lines of communication. “The better we can coordinate our efforts, the better we’ll be able to serve the university and the students at the end of the day,” he said.

“Indeed, we are a key constituency for both of these U.S. representatives and they, in turn, treat us as such,” Lyall said.

Kind said his district is a “mecca for higher education learning,” and said he welcomes continued input and information about what is important for colleges and universities in Wisconsin.

Petri praised the board’s work to identify priorities and determine the future direction of the university.

“If we are to prosper as a state, it will be in large part due to the University of Wisconsin,” Petri said.

The reauthorization of the federal Higher Education Act is a valuable opportunity to shape financial aid policies and to state opposition to punishing proposals, such as the McKeon bill before Congress, which Lyall said could cost UW students as much as $60 million in financial aid.

“We need our federal partners,” Lyall said. “We’re watching very carefully and doing what we can to ensure that punitive approach doesn’t occur.”

“This is a change that has come about primarily in this last year,” she said. “I think we need to take this trend seriously and take some specific actions.”

Lyall said the board should consider joining with student groups to create requests for the 2005-07 budget that would ensure sufficient financial aid funding, and will examine earmarking savings from administrative cutbacks for financial aid. Lyall reminded the board that the 2003-05 budget required a one-time use of $26 million in UW auxiliary reserves to fund student financial aid, leaving a hole to fill in the next biennial budget. Lyall suggested that the board could also adopt a resolution at its February meeting, with support from the chancellors and student governments, urging Congress to increase federal financial aid.

Regent Guy Gottschalk of Wisconsin Rapids suggested the board should communicate to the state that Wisconsin has a “moral imperative” to provide sufficient funding for financial aid.

“Communicating how we stack up with other public institutions is not a bad idea to make that moral imperative a reality for the people who make the decisions,” she said.

Lyall said she plans to bring more detailed options for improving the levels of financial aid to the board in February.

The five working groups of the regents’ study of the university’s future, entitled “Charting a New Course,” have made significant progress in a short time, Regent Guy Gottschalk of Wisconsin Rapids reported Friday.

Regent Jose Olivieri of Milwaukee said Friday that the board could use the suggestion to bring not just economic development but also financial aid to the forefront of budget talks.

“I think we should take them up on this notion,” he said.

Regent President Toby Marcovich of Superior noted that he proposed to the Legislature creating a similar task force two years ago.

“We should take advantage of this opportunity and not limit it to just one issue,” Marcovich said.

The full Board of Regents on Friday approved two final items of a six-part plan to increase credit transfer opportunities between the UW System and the Wisconsin Technical College System.

The board approval followed endorsement of minor changes in the two items, which were referred back to the Education Committee in November.

The first item will allow WTCS students in college-parallel programs at the Madison, Milwaukee and Nicolet campuses to transfer up to 72 credits and satisfy general education requirements at any UW campus, subject to UW faculty approval on those campuses.

The second item would create a broad-based committee to explore options for expanding the number of Wisconsin residents with bachelor’s degrees “in collaborative and cost-effective ways.”

After the vote to approve the measures, Regent Guy Gottschalk of Wisconsin Rapids noted that the plans should be followed in keeping with the mission of the UW Colleges, the UW System’s two-year freshman-sophomore campuses.

“The UW Colleges have a long history and culture of training students for the baccalaureate degree,“ he said. “They are demonstrably good at it.”

Regent Jesus Salas of Milwaukee said he hopes the new initiatives will not limit the expansion of programs in the two systems, which have both seen recent dramatic increases in enrollment.

“I look forward to collaborating with the technical college system and putting everything on the board,” Salas said.

“What courses we accept gets to the soul of what we are as higher education,” he said.

In other action Friday, the board approved resolutions to:

The Board of Regents will hold its next meeting Feb. 5 and 6, 2004, in Van Hise Hall on the UW-Madison campus.