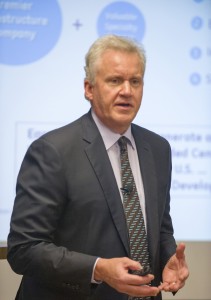 MADISON – The main problem facing the United States is that it’s not growing rapidly enough, Jeffrey Immelt, chairman and CEO of GE, told the University of Wisconsin System Board of Regents Friday.

“Everybody in the world is moving fast. If we’re not moving fast, we’re going to fall behind,” Immelt said. “That’s why we need to unlock the entrepreneurial spirit, the drive, the start-up companies.”

American higher education and universities like the UW are one of the most stunning advantages the country has, Immelt pointed out. “We can’t let it flounder,” he said.

Immelt identified several areas of opportunity that America – and its universities – should pay attention to: the natural gas industry, which has the potential to make North America energy self-sufficient; advanced manufacturing, a sector of the economy he believes is going to be reinvented and require significant research and development; and the industrial internet, where data can drive performance and change. “These three ‘white spaces’ are yet to be led by any individual institution,” Immelt said, “and that’s why I think it’s so exciting.”

He encouraged the UW, and other universities, to find their own synergies with the new growth areas and to develop innovation and development clusters around those.

Taking engineering as an example, he told Regents that the U.S. currently graduates about 135,000 engineers a year. “We think we could productively put to work 500,000 a year in this country,” he said. “If we could build around that, we would have more start-up companies, more innovation in society, more competitiveness.”

He reminded Regents that sometimes the best answers aren’t always found inside a company. Immelt pointed to GE’s experience with growing partnerships between businesses and universities, as well as close work with venture capitalists. “We’re always trying to bring back new things into the system,” he said.

For Regents, Immelt said, “The trick of good governance is you have a legal framework that makes you be broad. But the fact of the matter is, there are probably only two or three things that are really important to the University of Wisconsin.” He called it knowing the difference between “checking the box” and making enough time for working on those things that might be game-changers.

He also encouraged students to redefine college as a six-year experience, rather than the traditional two or four, and to spend broad periods of that time working, gaining hands-on experience, earning money to defray costs, and discovering new ideas. “We think internships are the lifeblood of a company,” he said.

“The one common attribute of every successful person I’ve ever met at GE is they’re a learner, they’ve got infinite curiosity,” Immelt said. “People have to want see how a story ends, how the experiment ends, and not be afraid to fail.”

Immelt reiterated that education is a primary driver of the nation’s innovation and competitiveness, but added that the challenge is to get people who are focused on short-term rewards to recognize the value of long-term gains.

The new jet engines launched by GE this year won’t break even for 15 years, Immelt said, and will be flying for 50. “You have to attract the kind of investors who know the kind of company you’re in,” he said. 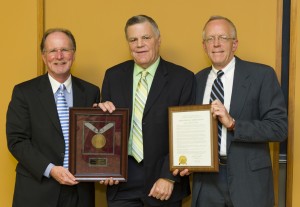 Regent Chuck Pruitt told colleagues that in his nine years of service to the Board, Brent Smith was guided by his belief in doing the right thing, even when it wasn’t an easy lift. “He believes in public education, and he’s acted on that belief to keep this university both accessible and of the highest quality, even if that means voting from time to time to increase tuition,” Pruitt said.

He also cited Smith’s support for the UW and the state’s technical college system working together, the UW’s Growth Agenda, and the value of the all UW System institutions acting together to further the Wisconsin Idea.

“His actions based on those beliefs leave this university a much better place,” Pruitt said. “This university will miss your intelligence, dedication, steady hand, and unassuming but forceful leadership.” 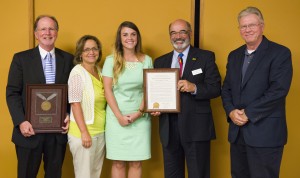 In his farewell remarks, Smith said it has been the friendships made along the way that made the journey great. “We have an all-star team of chancellors who provide tremendous leadership to the campuses and the state,” he said. He also thanked President Reilly, from whom he’s learned about leadership, dedication, and courage. Smith told his Regent colleagues that he leaves his post knowing that Wisconsin’s higher education is in good hands. “Never forget, people around the table, that you make a difference,” he said.

Before presenting the resolution of appreciation for Regent Katie Pointer, Regent President Mike Falbo singled out her great effectiveness in connecting with a broad spectrum of constituents over the past two years.

Regent Pointer, who will graduate from UW-Madison next year, recalled that when she first joined the Board, she was nervous, anxious, and quite unsure what her role would be. She said she came to appreciate her colleagues not just as “distinguished people making important decisions about higher education in Wisconsin,” but as a “group of people who care deeply” about doing right for students, faculty and staff, administrators, and taxpayers.

“I’ve come to understand the difficulties and complexities of being a student regent,” Pointer added.

“As a student, you sit on this board to convey students’ interests, yet those interests are exceptionally varied. One hundred and eighty-two thousand students in total, many with very different ideas on what is best and necessary for students. I would strongly argue that students’ voices on this board are critically vital to our overall mission of shared governance, but also for understanding the perspectives crucial to the proper functioning of our system.”

Outgoing Regents Jeff Bartell and Mark Tyler were recognized by the Board on Thursday.

The UW System Board of Regents will hold its next meeting September 5 and 6, 2013, in Van Hise Hall, Madison