Board of Regents freezes tuition for all UW students

University of Wisconsin System Board of Regents July Meeting, Day One News Summary

MADISON – The University of Wisconsin System Board of Regents unanimously voted Thursday to freeze resident undergraduate tuition at the 2012-13 levels, in accordance with the state’s biennial budget. The Regents went one step further, voting to also freeze tuition for all graduate students and non-resident undergraduates. The decision will keep UW’s price competitive and to grow revenues from nonresident and international student enrollments, which in turn helps subsidize Wisconsin residents.

Senior Vice President for Administration and Fiscal Affairs David Miller, who led the presentation, explained that the tuition freeze will leave the UW with $47 million in costs that would normally be funded from new tuition revenues.

The combination of cuts, transfers, mandated funding of new programs, and expected compensation increases results in $202 million of unfunded spending requirements during the next two years, Miller said, $127.7 million of which will need to be expended in the 2013-14 fiscal year. These changes will create an ongoing structural shortfall of nearly $62 million in the 2015-16 fiscal year.

“What’s really significant about this budget and this biennium is that $62-million ongoing annual base reduction,” Miller said. “We can manage the one-time. It’s how do you manage that permanently.”

The unfunded spending requirements and other factors will impact UW System’s program revenue balances, Miller said. He told Regents that FY 2013 carryover balances are expected to reach $785.6. A significant portion of those balances will be used to offset funding shortfalls in the coming year, while other balances will be re-invested by UW institutions in mission-critical programs. Accounting for these and other trends, UW campuses estimate that FY 2014 year-end balances may be $462 million. Miller said cash balances at UW institutions currently average about 21% of base budgets.

Miller noted that the UW has previously sustained large funding cuts by reducing spending, holding positions vacant, and generating new revenue through enrollment growth. In that context, institutions were incentivized to be more entrepreneurial and budget conservatively. “Those two things have generated significant revenue and I think that’s why we’re seeing the balances we are,” Miller said.

Regents discussed other recent changes to the biennial budget, including a 1% statewide pay plan increase in each year of the next two years.  While acknowledging that a 1% pay plan is welcome news, UW System President Kevin P. Reilly reiterated the pressing need to address the widening gap between what UW employees earn and what their peers at competing universities and colleges earn.  He cited an Inside Higher Ed story highlighting the severe faculty recruitment and retention challenges experienced at UW-Stevens Point.

“That is a painful example of our compensation problem that all of us – Regents, the System, Chancellors, elected officials – need to work together to change,” Reilly said.

Regent Janice Mueller, former state auditor, noted that all budgets have winners and losers, and noted that six institutions in the System will not have increased spending authority in this biennium.

Addressing other legislative requirements in the budget, Regent Jerry Whitburn spelled out the key assignments the UW must complete related to identifying methodology and setting policies for tracking and distributing program balances and reserves. “Typically, large public systems do not have a formal carry-forward policy in place,” Whitburn said. “We have been directed by the legislature to put one in place.”

David Ward, Interim Chancellor at UW-Madison, called for the Board to seek an open discussion in the state about what is the proper public/private responsibility for covering tuition as part of a longer-term approach to tuition policy.

Ward said that while institutions have traditionally dealt with revenue crises through cost containment and technology and innovation, those tactics require realistic and competitive tuition rates relative to peers.

“If your price is $5,000 less than most of your competitors – Minnesota, Illinois, Iowa, Indiana – then you’re trapped by using up all your innovation just to catch up with other people’s price,” he said. “It would be good for us to decide what is a fair price and then guarantee going forward very prudent increases in tuition.”

Responding to a UW System leadership request, an independent review team presented a series of recommendations to optimize the Internal Audit function at UW System. The team, comprised of experts from Duke University and the accounting firm Baker Tilly, addressed the Business, Finance and Audit Committee.

To improve the effectiveness of the internal audit function, the team also recommended that internal audit staff at all institutions should report directly to the System chief audit executive to allow for better prioritization and coordination of audit activities.

After hearing the recommendations, there was discussion about the CAE’s reporting relationship with the audit committee and/or the System president.

“We believe this structure will support the evolution of the internal audit function, from where it has been to a much more robust function that is accountable,” said Christine Smith of Baker Tilly, adding that the goals are ensuring independence and objectivity.

President Reilly suggested to the Committee that additional time might be beneficial to more fully understand implications of the dotted-line reporting relationship, and to get input from Chancellors.

The Committee ultimately approved a resolution incorporating most of the review team’s recommendations, but allowing for additional discussion of the reporting relationships.

Regent Jan Mueller also expressed some concern about the time and skill set required to meet the necessities of audit function. 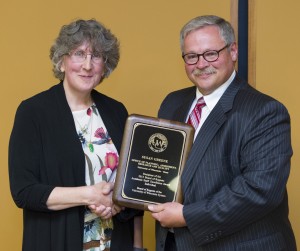 The Regents honored this year’s recipients of the Academic Staff Awards for Excellence, the highest recognition bestowed on members of the UW System’s academic staff.

“Without these talented individuals, we could not achieve the level of educational excellence, service to students, and dedication to community that have made, and continue to make, UW System institutions among the nation’s finest,” said Regent Mark Tyler, who chaired the selection committee. 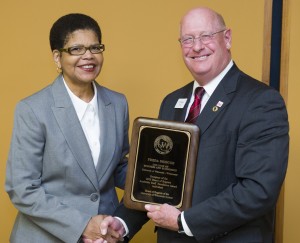 Regent Tyler introduced Susan Greene, who has been the main point of contact for graduate students at UW-Stout, providing assistance with thesis research from planning methodology to assisting with data analysis and interpretation. He noted that under her leadership, the number of graduate student projects at UW-Stout has more than doubled during the last three years.

In accepting the award, Greene said that she really cares about helping people, be it students, faculty members, or staff members. “My primary goal is to help them be successful in what they need to do….I’m there to help them along the way, but at the end of the day, it’s their accomplishment.”

Regent Tim Higgins presented the second individual Award for Excellence to Freda Briscoe, who has been on staff at UW-Whitewater since 1992. Calling her work “a labor of love,” Higgins told Regents that Briscoe’s enthusiasm and dedicated attention to both the Minority Business and Minority Teacher Preparation programs have increased participants’ grade-point averages and enhanced the retention and graduation rates for first-generation and underrepresented students.

Briscoe thanked her colleagues who “twisted her arm” to apply for the award. She reflected that – among many contributing factors – an outstanding academic staff member is surrounded by an outstanding cast of colleagues, is “trustworthy, dependable, and committed to institutional purposes and goals,” and “never, never forgets that students are why we are there.”

Regent Tracy Hribar presented the group award to the Distance Learning Center at UW-Platteville, represented by its executive director, Dawn Drake. Hribar told the Board that the center offers degree programs at the graduate and undergraduate level to meet the needs of non-traditional, place-bound students, typically working adults with families. Course registrations at the center have boomed over the last decade.

After introducing several colleagues who were able to attend today’s ceremony, among them Director Dan Avenarius, Drake emphasized that the center’s goal was always to offer “complete [online] degree programs for people in nontraditional situations” – not just stand-alone online classes.  Online degree programs were not common when the center got off the ground almost 15 years ago. Over that time, the center has had broad reach, Drake said, including serving students in all 50 states, all 72 counties in Wisconsin, and 48 countries.

Citing representative student comments about the program, Drake said they often fall into three categories: 1) gratitude for the opportunity to complete a degree while maintaining family and work commitments; 2) surprise at how interactive the online courses are; and 3) frequent offers of promotions, raises, or other job opportunities after graduation. 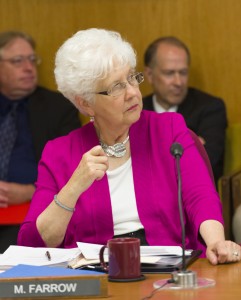 The Board welcomed three new members. Regent Margaret Farrow of Pewaukee and Regent Janice Mueller of Madison were appointed by Gov. Scott Walker on June 10. Regent Drew Petersen of Verona succeeds Regent Mark Tyler as President of the Wisconsin Technical College System Board and ex-officio member of the UW System Board of Regents.

Regent Farrow is a former lieutenant governor of Wisconsin – the first woman in state history to hold that office – a former state legislator, and former president of the Elm Grove Village Board.

Regent Mueller was appointed by the Legislature in 1998 to serve as the state auditor within the Wisconsin Legislative Audit Bureau.  She was also the first woman to hold that position. After retiring in 2011, she was honored with a joint resolution of the Legislature for her 35 years as a public servant, which included serving as a legislative fiscal analyst in the Legislative Fiscal Bureau. 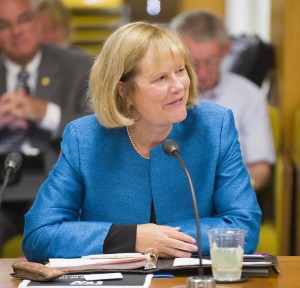 Four Regents’ terms of service on the Board of Regents are now expired. The Board recognized two of those Regents on Thursday: Regent Jeffrey Bartell and Regent Mark Tyler.

Regent David Walsh, who has known Bartell for over 54 years since they first met during their sophomore year in high school, described Bartell as “a real community leader” and praised his patience and thoughtfulness. In his farewell remarks, Bartell reiterated how much he admires the UW System and that he is “in awe of the talents and dedication” of university leaders, faculty, and staff. He also decried the legislative lashing the UW System received over the program revenue balances, saying that once more was known about those balances, what they were to be used for, and how they compared with the reserves of other institutions, the balances were “what many experienced financial managers would call prudent reserve ratios and business practices” – equaling about 90 days’ worth of operations.

Bartell also observed that, despite disagreements over policy matters or actions of the Board, in his experience, “All of the Regents have as their principle concerns – and sometimes very passionately – the best interests of the UW, the people of Wisconsin, and our students.” 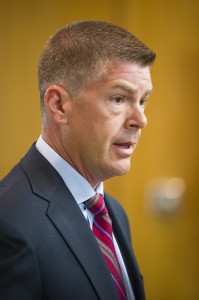 Tyler said he has been completely impressed by UW faculty, staff and students, from “athletics to water,” and, like the rest of the nation, he’ll be watching as the UW leads the way with the UW Flexible Option in the next few years. He said that if he had a UW genie he would wish for three things – to achieve seamless transitions between the technical college system and the UW (and vice versa), to ensure every UW undergraduate has some type of experiential learning or undergraduate research experience, and to have the UW follow the technical colleges’ lead and not charge high school students for tuition. He said, “I know genies aren’t real. I know relationships are, and I value each and every one that I’ve created over the past several years.”

In other Board of Regents action on Thursday: