President George W. Bush stressed his continuing efforts to protect Americans from terrorists and strengthen the economy during a visit Aug. 14 at the University of Wisconsin-Milwaukee. 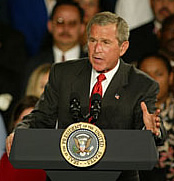 President Bush makes a point during his remarks at UWM.

Fresh from his own economic forum at Baylor University, Bush used the visit to the UW System’s second-largest campus to speak in reassuring tones about his plans for the future.

“We will do whatever it takes to protect our homeland and keep our economy strong throughout America,” Bush said to a crowd of approximately 1,800 people in UWM’s Klotsche Center.

Bush’s visit was the first ever by a sitting president to UWM, the UW System’s urban university. Chancellor Nancy Zimpher welcomed Bush and Wisconsin Gov. Scott McCallum to campus, stressing that UWM is the UW System’s economic engine for southeast Wisconsin. 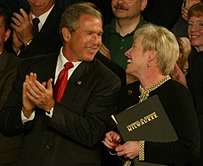 Zimpher thanked Gov. McCallum and the Legislature for recognizing the many contributions that UWM and the UW System make to Wisconsin. She added that the governor’s commitment to growing the state’s economy was in part inspiration for Wisconsin Economic Summit III, which will be sponsored by UW System Oct. 14-16 in Milwaukee.

“And Mr. President, we would be honored to have you here again to speak at the Economic Summit,” Zimpher told Bush.

The president praised Zimpher and UWM during his remarks, saying the university’s commitment to quality education is encouraging.

“I love the idea of a school in which people come to get educated and stay in the state in which they’re educated,” Bush said. “It is a positive sign that this University is fulfilling its important function — which is to train Wisconsin youngsters for the future and then have the Wisconsin youngsters stay here to make sure that the future is bright for all citizens.”

In particular, Bush singled out Zimpher and UWM’s effort to improve the lives of children in Milwaukee. Through such programs as the Milwaukee Partnership Academy and others, UWM is working to help children by strengthening the Milwaukee Public Schools.

“I congratulate you for your leadership (and) I appreciate so very much your focus on no child being left behind,” Bush told the chancellor.

The president also challenged Congress to pass the current defense appropriations bill and have it on his desk to sign in early September. Among its many items, the bill contains $1 million for the UW System Academic Advanced Distributed Learning (ADL) Co-Lab, which serves as the focal point for the nations universities and colleges in promoting high quality, reusable content for distributed learning.