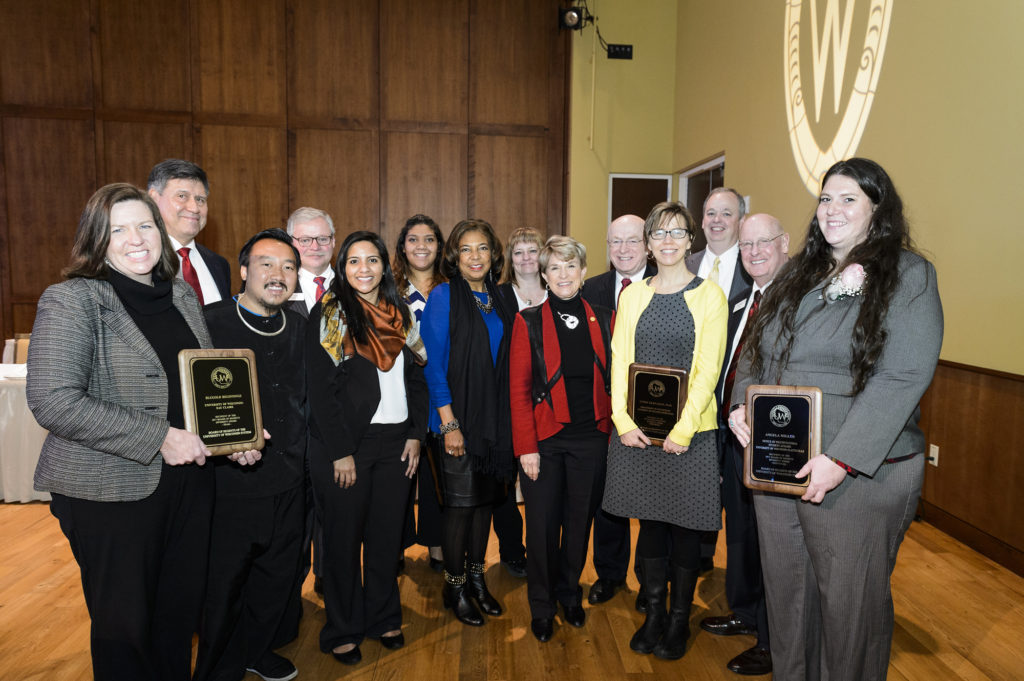 Recipients of the 2017 Regents’ Diversity Awards, with members of the Board of Regents and UW System President Cross.

MADISON – The University of Wisconsin Board of Regents honored the ninth annual winners of its Regents Diversity Awards Friday. The awards were established by the Board to recognize and support individuals and programs in the UW System that foster access and success in university life for historically underrepresented populations.

Regent Mark Tyler, chair of the selection committee, said the people and programs honored are “expanding opportunity for historically underrepresented student populations, making sure no talent goes untapped in our communities. We are honored to recognize their leadership and dedication to creating partnerships and building relationships that help make our campuses more effective learning, living, and working environments for all.” 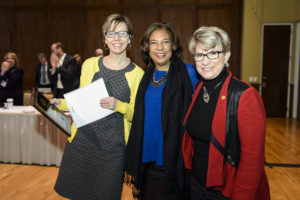 This year’s Diversity Awards winners are:

A faculty member at UW-River Falls since 1999, Kernahan has established herself as a recognized expert in the study of racism and prejudice. Under her leadership, the university has improved campus climate and is addressing issues of diversity and inclusion through university-level strategic planning.

“I think it’s important to believe in all students, including students that might have a harder time with college or getting to college,” said Kernahan, who has primarily focused her efforts on students of color and first-generation students. “The other piece is we have to believe them when they tell us they feel dismissed or unwanted on campus. We have to take that stuff seriously and do something about it.”

Miller told Regents that campus partnerships and a willingness to change institutionally are essential to have an impact on closing student equity gaps.

“It’s about asking the hard questions and reflecting on the fact that some of the ways we systemically approach our work and what we do, even though we’re proud of them and even though we’ve always been doing it this way, some of those things need to change,” Miller said.

“We learn a lot from our students, especially students from historically underrepresented backgrounds, and we need to continue to learn from them,” Miller added. “I want to acknowledge their persistence and their complete resiliency … as we continue to develop and continue to do good work to change some of the things that are problematic.”

Led by Jodi Thesing-Ritter, Blugold Beginnings is an innovative pre-college program to increase enrollment and retention of underrepresented minority students in higher education. The program serves fifth graders, middle school students, and high school students, and has expanded to include a campus learning community to support students admitted to UW-Eau Claire. Research has shown that students enrolled in the program have a higher grade point average than all students of color and first-year students not in the program.

“When you take on something like tackling the opportunity gap, you have to make systemic change – which requires the infusion of money and resources,” said Thesing-Ritter. She applauded campus leadership, past and present, for making the commitment to providing staffing and support “to build a program from the ground up that changes the system.”

“We are also creating a college-going culture in our region,” Thesing-Ritter said. “We have to continue to fight vigilantly to allocate the necessary resources to appropriately support underserved folks so they have the same successes as fully resourced kids.”

In her report to the Board, Regents President Regina Millner provided updates on recent activity of both the Task Force on Campus Climate and the Tuition-Setting Policy Task force. She also gave a preview of guest speakers to address the Board’s March meeting. Following up on December’s Board presentation by the UW System Task Force on Sexual Violence and Harassment, Millner also noted that the recommended System website on the subject is now live.

President Ray Cross presented Regents with an update on UW System’s meetings with legislators and ongoing budget advocacy efforts. He also noted that UW System recently hosted a well-received “UW 101,” an informational session for legislators looking to learn more about the UW System. He thanked President Millner and Chancellors Cathy Sandeen and Beverly Kopper for participating.

In his report on News from Around the UW System, Cross told Regents that UW-Platteville recently received a $300,000 USDA grant to support grazing research for dairy cattle at Pioneer Farm. As part of this grant, students will examine whether certain grasses increase milk yield and milk quality. 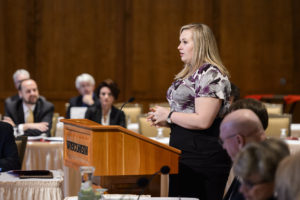 Starr, a junior at UW-Madison, addresses the Board of Regents

“Being a first-generation college student is a unique experience. Applying for admission and financial aid can seem daunting when you don’t have someone there who has done it before,” Starr told the Regents. “It’s hard for me to imagine the life I am going to have after earning a college degree. I am curious to know in what ways my life will be different.”

Starr said she always knew she wanted to work in health care, “to be able to take care of those who need it.” Her future plans include working as nurse in an intensive care unit and eventually applying to a nurse anesthetist program. She currently volunteers in the burn unit at UW Hospital. “I know I am pursuing the right career because I can see myself in their shoes,” she said. 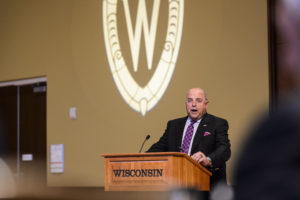 As part of UW-Madison’s presentation of its NCAA Division I Athletics Annual Report, Athletic Director Barry Alvarez told Regents that UW-Madison has had one of the most consistently successful athletic departments in the country over the past quarter century “because we continue to invest in our student athletes.”

Alvarez said UW-Madison Athletics has built a culture around rules compliance, fiscal responsibility, and academic performance. He acknowledged challenges including escalating costs of renovating and building new facilities as well as rising salaries, particularly for coaches in football and men’s basketball.

“We will remain competitive in these areas and continue to be fiscally responsible. Our history shows it is possible to do both,” Alvarez said.

Alvarez pointed out that the university provided educational support and athletic opportunities to approximately 900 student-athletes in 23 sports in 2015-16. UW-Madison student athletes maintained a 3.06 cumulative grade point average (GPA) at the end of the Spring 2016 term. He noted that UW-Madison’s Athletics “is the only athletic department in the nation with a department on diversity and inclusion.”

UW-Madison’s Athletics Department reported an actual operating surplus of $290,721 for fiscal year 2015-16. The department’s economic impact has been estimated by NorthStar Economic at $970 million annually, with nearly 9,000 jobs supported and created by the department. Alvarez told Regents that a substantial portion of athletic revenue is annually distributed to the rest of the campus and that amount will increase next year.

In other action, the Board of Regents:

The University of Wisconsin System Board of Regents will hold its next meeting on March 9, 2017, in Madison.