Board of Regents reflect upon a year of successes and challenges

The Board of Regents began its second day by recognizing a number of departing leaders: 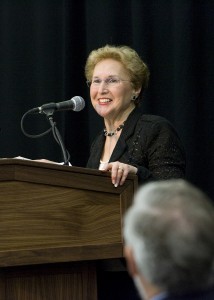 Board of Regents reflect upon a year of successes and challenges 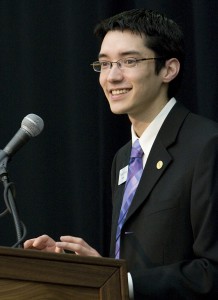 In his regular report, President Mark Bradley reflected upon a year filled with, what he described as, “big-picture issues” for the Board.

“In the last 365 days or so, we worked to execute on our plan, the Growth Agenda for Wisconsin,” said Bradley. “A framework that, I believe, is already helping us to navigate through the changing tides of higher education.” 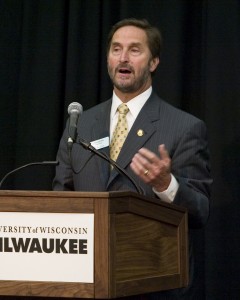 “Throughout this crucial development process, we’ve held tight to our responsibility to remain transparent and collaborative with Wisconsin leaders and taxpayers,” said Bradley, pointing to the Board’s ongoing dialogue with Gov. Doyle and the legislature.

Bradley also commended the Board on its work to fill five chancellor vacancies, three of which were confirmed by the Board in closed session yesterday. 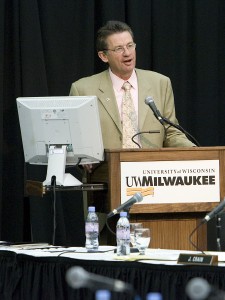 “I am proud to say that we were able to sustain this momentum in all of these areas while working to fill these positions,” said Bradley.

Looking to the next 365 days, Bradley added that he “looks forward to those challenges the Board will face.”

In his regular report to the Board, UW System President Kevin P. Reilly presented the UW System’s “Report on Campus Safety.”

“[It is] our responsibility to provide our institutions with clear guidance on the matters of emergency preparedness,” said Reilly. He created the 18-member Commission on University Security last year, after the tragic events on the Virginia Tech Campus. It was charged with developing safety and response recommendations for the UW campuses. 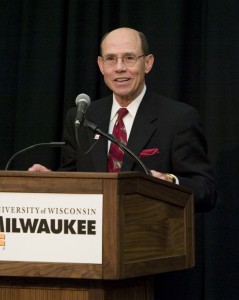 “It is hoped that these recommendations have enhanced, and will continue to enhance, our UW institutions’ readiness to respond to the unexpected,” said Reilly.

The UW System Report on Campus Safety included the recommendations reported by Gov. Doyle’s “Task Force on Campus Safety,” which issued its final report this past November.

“We don’t have an unusually risky place on our campuses,” said Regent Jeff Bartell. “The most effective efforts that we can make are in prevention.”

Among the recommendations of the report, the Commission advised the expansion of the Campus Safety Coordinators group, a conglomeration of representatives from each campus who serve as contact persons on issues of campus safety and security.

“It is very clear from the campus input, that although every institution is taking steps to enhance its campus safety and security efforts, there are growing cost and resource implications,” said Rubin. “Costs for implementing a number of these expectations are not trivial.”

“Much of what we’ve done, has been done with what we already have,” said Bartell. “I complement all campuses for what they’ve been able to do in that regard.”

Julie Gordon, UW System Director of the Office of Planning and Audit, added that the Board will receive a progress report in one year regarding the institutions’ implementation of the report’s recommendations.

“I think it is very important to keep this subject on our table,” said Bartell.

Christy Brown, UW-Milwaukee’s Interim Vice Chancellor of Finance and Administrative Affairs, shared her institution’s work to enhance campus safety and preparedness. Among the initiatives, the university created a new Campus Safety website, SAFE Walker patrols, and the formation of a Threat Assessment Team.

“We believe that these strategies and measures to prevent, intervene and react in the aftermath, are helping to create a culture of safety and safety awareness on our campuses and surrounding neighborhoods,” said Brown.

“Understanding that the current economic climate has us tightening our belt, it is a very competitive process in determining which initiatives come forward for your consideration,” said Reilly, adding that of the $63 million initial budget submissions, the UW System has been able to “shape those into a package totaling less than $35 million.”

“I can assure you that the proposed 2009-11 request items that we’ve prepared for your consideration would fit within the Governor’s previously stated priorities,” added Associated Vice President Freda Harris. “[They] are the strongest proposals brought forward by our campuses.”

Focusing on the UW System’s growing difficulty to remain competitive in regards to offering comparable benefits for leadership, faculty, and staff, Reilly also announced his plans to create a UW Commission on Competitiveness and Compensation to delve deeper into the issue.

“To develop human capital we must invest in human capital,” said Reilly. “We certainly cannot achieve the Growth Agenda vision if our institutions cannot hire and keep the professors who will teach our students and engage in that job-creating academic research.”

Although details about the Commission have not been formulated, Reilly anticipates a report, including recommendations, by early 2009 to ensure the findings can be included in the development of the UW System’s next pay plan.

The Board approved a resolution requesting full funding for the state-mandated Veterans Tuition Remission program, a program that covers the cost of higher education for veterans.

The Board also passed a resolution requesting the Higher Educational Aids Board seek increased state investment in the next biennial budget, thereby granting a dollar-for-dollar increase for eligible University of Wisconsin students.

The UW System Board of Regents will hold its next meeting on August 21 – 22, in Madison.