Board of Regents recognizes winners of Teaching Excellence Awards

MILWAUKEE – The University of Wisconsin System Board of Regents on Friday honored two professors and one academic program for their outstanding achievements. The Regents Teaching Excellence Awards, bestowed this year for the 22nd time, are the UW System’s highest recognition for members of its faculty and academic staff.

“The students of the UW System are blessed to be taught by some of the best teachers in the world,” said Regent Chuck Pruitt, who chaired the selection committee. Citing anthropologist Margaret Mead, he said the award-recipients are reminders that the ability of a small group of people to change the world should never be underestimated. He called the winners “impressive examples of the powerful impact that excellent teachers can have on students’ lives.” 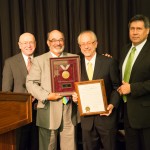 Others on the selection committee were Regent Margaret Farrow, Regent Chad Landes, and Regent Gary Roberts.

Award recipients are selected for their strong commitment to teaching and learning; use of effective teaching strategies to enhance student learning; and significant impact on students’ intellectual development.

Regent Landes introduced the first winner, Matthew Roberts, a professor in the Department of Civil and Environmental Engineering at UW-Platteville. Roberts, who joined the faculty in 2002, incorporates multiple teaching techniques to accommodate students’ learning styles, helping them master the material. Roberts also offers his expertise outside of the classroom, participating in the student chapter of the American Society of Civil Engineers. 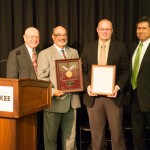 Roberts expressed his gratitude not only for the award, but for the opportunity it provided to reflect on how his teaching had changed over the years. “As I look back to 12 years ago when I started teaching at UW-Platteville, I realize I had lots of misconceptions about what it means to be a teacher. My biggest misconception was that all students would be like me, with the same learning styles, the same motivations,” Roberts said. “I had to learn to use different methods, different styles of teaching to reach out to different types of learners.”

Regent Pruitt presented the second individual award to Clifton Ganyard, an associate professor in the Department of Humanistic Studies at UW-Green Bay. Ganyard’s instructional style, much beloved by his students, is an approach that integrates art, philosophy, literature and music as part of an interdisciplinary approach. 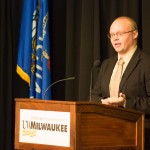 “I’m constantly learning new material as I teach, and I learn the most from students,” Ganyard said. “They have such remarkable curiosity, and they’re always coming up with new ideas. It’s fascinating to watch them learn.” 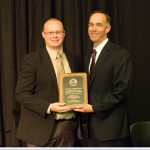 Regent Farrow recognized the outstanding teaching of a department or program in presenting the Regents’ Award to the Biology Department at UW-River Falls, represented by its chair, Professor Mark Bergland. Farrow noted that the award-winning department has been a national leader in an effort to improve undergraduate biology education as part of a National Science Foundation initiative that exposes students to research projects early in their coursework. The Biology Department also has taken a leadership role in achieving the campuses’ strategic goals related to globalization and innovation. 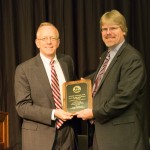 “Our teaching philosophy is to give students an authentic research experience as early in their careers as possible – as early as their first semester,” Bergland said. He added that it’s important to remember that quality education doesn’t come cheap. “In STEM fields, many schools are actually curtailing freshman laboratories. We’ve taken the opposite tack.”

Following up on an education committee report and full-Board discussion of remedial education efforts, President Cross called for the UW System to come up with “a bold plan” to address the problem. “This is a national issue and I think there’s an opportunity here. This cannot be solved alone. We need to be partners with K-12,” Cross said. “We need to own this together.” Cross added that the University must act with some urgency to attack this problem. 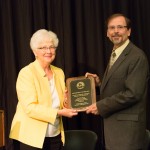 Among the keys to that plan are employing evidence-based research, identifying clear action steps, and providing periodic progress reports to the Board.

Board re-elects its top leaders

UWM in the Student Spotlight

Olivia Collins, a UW-Milwaukee junior from Little Rock, Ark., was featured in June’s Student Spotlight, and shared with Regents her positive experiences with mentoring. Collins, a Lawton Scholar majoring in social work, said she had benefited from having others to talk to when she first came to campus, and she has carried that forward by serving as a mentor herself. Students sometimes need help to find focus, she said, and balancing their lives on campus with being away from their families. She said she encourages the students she mentors to “envision what you want to do in the next couple years, to think critically about decisions that are made, and to remember why they decided to come to UWM.”

Under reporting guidelines approved in 2012 by the Board of Regents, officials from UW-Milwaukee presented the Board with their NCAA Division I Athletics 2014 Annual Report.

Athletic director Amanda Braun told Regents that top priorities of the program include a strong commitment to the student-athlete experience and aligning the athletics mission and goals with the university’s mission and goals. She reported that two-thirds of all UW-Milwaukee student athletes earned at least a 3.0 grade-point average over the past year. The graduation success rate amongst student-athletes was 77%, above the average of the overall student body.

Among the challenges, she noted that the men’s basketball program has been penalized and banned from post-season play in 2014-15 due to students’ insufficient academic performance.

The Board recognized the service and accomplishments of two departing colleagues: Regent John Drew and Student Regent Chad Landes.

Introducing Regent John Drew, whose six-year term is expiring, Regent Ed Manydeeds noted that “John has always been a voice for people who don’t have a voice.”

“I know that UW System is a priceless resource for the people of Wisconsin,” Drew said. “I also know that declining state support threatens this priceless resource.” Drew also reiterated that “our System still has miles to go to repay the education debt to underrepresented minorities.”

Regent Chad Landes, a recent graduate of UW-Platteville, was recognized for his year of service. “If I could have changed anything about my experience at UW-Platteville, I would have said thank you more often – to the faculty, staff and administrators, for making sure that students attain the skills and education they need,” Landes said.

“We go through our careers hoping that when the time comes to make a change, you’ll know it. It’s the right time,” said Chancellor Harden, noting that he and his wife are looking forward to spending more time with their 11 grandchildren. He called the opportunity he’s had to work with very committed faculty and staff at UW-Green Bay “phenomenal.” “I step aside a really happy man, and look forward to a lot of time working on behalf of higher education in the state of Wisconsin,” Harden said.

Chancellor Lovell said he will continue to advocate for the UW System in his new role as president of Marquette University. “One of the great things about me moving across the street is we’ll be able to partner in ways we may not have been able to imagine before. All of our paths will cross again,” Lovell said. He also urged the Board to continue its efforts to help provide the campuses with the resources they need. “There’s tremendous momentum on this campus, and it’s going to carry on,” he said.

Chancellor Sorensen, who was not able to attend the meeting, told Regents in a letter that fully realizing the individual strengths of the different campuses while valuing the whole of the System is “a delicate balance that must be achieved.”

Senior Vice President Mark Nook, who has accepted a new position as chancellor of Montana State University Billings, said it had been an honor to “give back” to the UW System, where he and his family had been so well served.