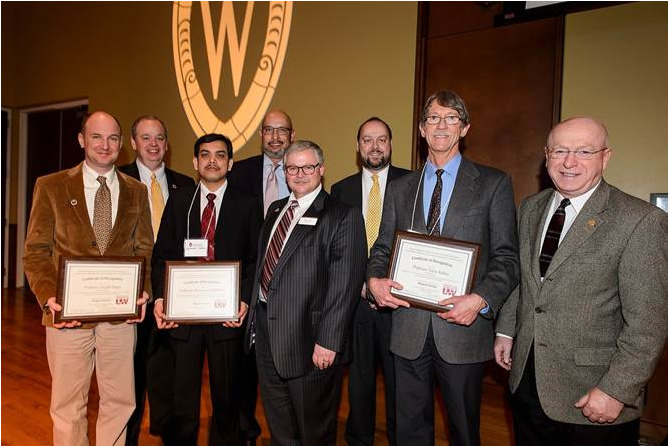 “I love the notion that we have the potential here in Wisconsin to develop a market niche that can be explored and adopted by so many other states in this country,” said UW-Eau Claire Associate Professor Joseph Hupy, whose student-faculty research involves “lowering overhead inventory costs within the industrial aggregate and sand mining industry using Unmanned Aerial System (UAS) technology.”

The Regent Scholar program was introduced in 2014 to recognize and reward innovative faculty-student research and to provide support for collaborative project initiatives with Wisconsin business and industry. Key objectives of the program include providing summer funding support for faculty to engage in research and other scholarly activities while stimulating innovation and industry outreach at UW System campuses across a wide spectrum of academic pursuits.

Regent Mark Tyler, who chaired the grants evaluation committee, reiterated the importance of this program for faculty and undergraduate research as well as the building of collaborations and partnerships. 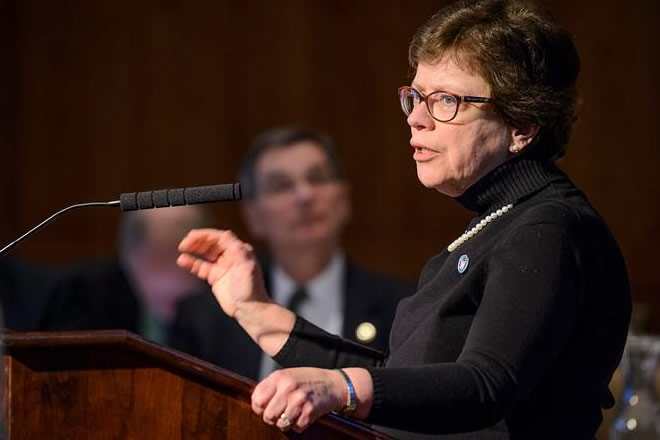 Chancellor Blank speaks during her presentation at the UW System Board of Regents meeting Feb. 4. (Photo by Jeff Miller/UW-Madison)

Host Chancellor Rebecca Blank of UW-Madison highlighted student and faculty achievement in an address to the Board of Regents on Thursday, saying that, in many ways, 2015 was a record-setting year for the state’s flagship university.

And she urged a renewed commitment to keeping UW–Madison among the top public universities at a time when peer institutions are seeing greater investment from their respective states.

The state investment that began 168 years ago helped grow UW–Madison into one of the top 25 universities in the world, Blank said. The university has been nurtured by a partnership between citizens of the state, students, alumni and donors. Maintaining that status will require continued investment by all partners, she said.

“We’ve had a series of difficult years in terms of budget, here at the University of Wisconsin–Madison as well as all the System schools. And that is particularly troublesome because our peers are investing,” Blank said.

Academically, UW-Madison reached new levels in 2015 in applicants and degrees awarded. More undergraduates are earning their degrees in six years or less than ever before.

In addition, the year saw a host of student and faculty awards, and major research breakthroughs such as the discovery of early human fossils, the engineering of human vocal cords, and the creation of new yeast hybrids.

Meanwhile, the graduation gap between targeted minority students and all students is the narrowest since the university started measuring that statistic. It has dropped to half of what it was a decade ago.

Advancements stretch beyond the classroom as well, Blank said. Nearly two-thirds of current UW–Madison seniors report that they’ve held internships or participated in a program while an undergrad that gave them career experience. More UW students are studying abroad and more participate in public service as part of their classes than ever before.

Kris Andrews, UW System’s Associate Vice President for Federal and Corporate Relations, provided an overview of federal relations activities and priorities, both in 2016 and looking ahead.

A key success this past year was the extension of the federal Perkins Loan program, which had been scheduled to end in September 2015, potentially leaving hundreds of thousands of students nationwide in financial limbo.

“Working with a national coalition and a bipartisan congressional delegation – led by Senator Baldwin and Congressman Pocan – the UW System strongly advocated for and helped get a two-year extension of this important student loan program. This was a huge win,” Andrews said.  She noted that in 2013-14, the Perkins Loan program had disbursed almost $29 million to about 16,000 UW students.

Other positive developments in the past year included changes in the Federal Application for Free Student Aid (FAFSA) application process that will expedite student loan processing, an increase in the maximum Pell Grant award; increases in funding for the National Institutes of Health and others; and $5 million in the federal budget bill for competitive funding at non-land grant colleges of agriculture and natural resources.

Other high priorities include maintaining high levels of funding for university research; the reauthorization of the Higher Education Act; and proposed regulatory changes.

Director of Athletics Barry Alvarez led UW-Madison’s presentation of its NCAA Division I Athletics 2014-15 Annual Report. Under a reporting framework established in 2012, institutions that participate in NCAA Division I athletics must annually provide information to the Board regarding academic, fiscal and compliance matters.

UW-Madison reported that it provided educational support and athletic opportunities to nearly 900 student athletes in 23 sports.

After the bestowing of the annual Regent Scholar grant awards, UW System President Ray Cross reported there is significant enthusiasm for the UW System’s proposed Wisconsin Business Experience, which aims to connect every junior or senior UW student with a Wisconsin business as part of their university experience. He said several key partnerships are starting to take shape, with backing from the Governor’s Council on Workforce Investment, the Department of Workforce Development, the Wisconsin Economic Development Corporation, Wisconsin Manufacturers & Commerce, and others.

Cross also reported that the UW System continues to look into opportunities for three-year degree programs. The concept was raised recently by Gov. Walker.

The report showed that the UW System’s unrestricted net position decreased by $113.6 million, after falling an additional $133 million in 2013-2014. Gordon noted that new accounting standards, which required the first-ever recognition of a $330.2 million restricted asset related to the UW System’s pension plan obligations, accounted for the majority of the increase in net position.

Kolison reported to the Board on actions related to the establishment, suspension, or elimination of programs, providing a broad picture of UW System’s program array for planning and accountability. This year’s report focuses on the process by which programs are established within the UW System.

UW-Madison contributed to this summary.

The University of Wisconsin System Board of Regents meeting
will resume on Friday, Feb. 5, at UW-Madison.