Board honors UW System faculty for excellence in teaching

MADISON – Recognizing the extraordinary talent and vital capacity of teachers within the University of Wisconsin System, the Board of Regents on Friday (Sept. 5) honored the winners of the 12th annual Regents Teaching Excellence Awards.

“The Regents Teaching Excellence Awards ceremony makes sure that we do not take for granted the multifaceted resource we have in our faculty and instructional academic staff, which remain the cornerstones of our university system,” said UW System President Katharine C. Lyall.

The 2003 Regents Teaching Excellence Awards recognize outstanding career achievements by individuals and an exceptional commitment to teaching by academic departments or programs. The awards are administered by the Office of Professional and Instructional Development.

“As Regents, we can and must work to publicly honor and help make understood the intense labor and dedication that go into the act of teaching,” said Regent Danae Davis of Milwaukee, chair of the regent committee that selected the winners. “In our continual search for ways to encourage and reward good teaching, the awards we make today represent a small, but, I hope, significant, step in the right direction.” 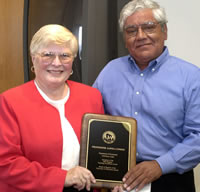 Regent Jesus Salas of Milwaukee presented the first award to Janna Cowen, professor of economics at UW-River Falls, whom he noted has been called a “fond legend” on campus.

“Here is a teacher who, for 24 years, has made the clarification, illumination and practical application of the discipline to undergraduate students the calling of her life,” Salas said. “Her door is always open.”

Cowen thanked the regents for the award, and with her acceptance, said she was in effect “standing in” for the dozens of other excellent and deserving teachers at UW-River Falls.

“I find this very encouraging,” Cowen said. “I selected UW-River Falls 25 years ago when I was in the job market because they convinced me that they valued teaching. I could not have done it without a great deal of support from my campus and my department.”

Regent Charles Pruitt of Milwaukee presented a second award to Carole Vopat, professor of English and women’s studies at UW-Parkside. Again and again, he said, students write that Vopat’s teaching changed their lives. 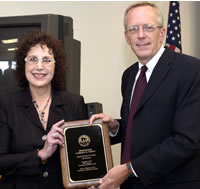 “Her students do not just take a course from her,” Pruitt said. “They enter, struggle and eventually thrive and soar.”

In thanking the regents for the award, Vopat also said she appreciated the board’s commitment to quality teaching, even in the face of budget cuts, for the benefit of all students.

“I want to give them that fervor and passion I learned in college,” Vopat said. “I believe education makes us better and helps us to rise.”

The award for departmental excellence went to the Department of Geology and Geography at UW-Stevens Point, which Davis noted is recognized for innovative use of teaching technologies and cutting-edge curriculum.

“This is a department for whom experiential learning is not just a trendy catchphrase, but at the foundation of a discipline that is practical, hands-on, and active,” Davis said. “Their approach is holistic; their results are phenomenal.” 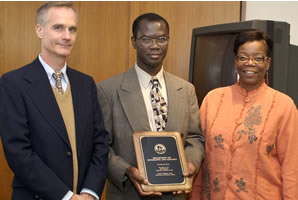 Department Chair Benjamin Ofori-Amoah and Professor David Ozsvath accepted the award on the behalf of the department, which, Ofori-Amoah joked, is so dedicated to students that faculty members would not leave class to attend Friday’s ceremony.

“This doesn’t mean that we’re going to stop asking (for support),” he said. “We’re got some great—and wild—ideas. There’s always room to evolve.”

Ofori-Amoah also thanked the department’s students, whom he said are the real reason for the excellence award.

Each winner received $5,000 for professional development.

Read profiles of the award winners

The full board received on Friday a written summary pdf of Thursday’s working group sessions as part of “Charting a New Course for the UW System”—the regents’ study of priorities for the university system in the next decade.

Several regents suggested that working group chairs should report to the full board on the second day of the regents’ monthly meetings to keep all members informed about the study’s progress. Regent President Toby Marcovich of Superior and Study Chair Regent Guy Gottschalk of Wisconsin Rapids agreed that the board could consider alternative ways to present the summaries.

With the new academic year comes change on UW campuses, as well as a chance for fresh perspectives related to the operation of the university, UW System President Katharine C. Lyall said in remarks to the Board on Friday.

Lyall reminded the board that budget cuts have meant noticeable changes for students and employees on all UW campuses. Both internal and external members of the UW community will notice fewer courses, longer lines and slower services, and she asked for patience and understanding as campus business resumes.

Lyall also said that in addition to the $250 million reduction in state funding for the UW System over the next two years, the Department of Administration has not yet decided how to allocate additional cuts stemming from the Governor’s vetoes—which could add up to as much as another $20 million to the UW System cuts. In addition, Lyall noted that the UW might have to spend as much as $8 million more for increased health insurance costs; is still facing a $6 million shortfall in utility funds; and could lose up to $700,000 from the state to assist disabled students.

In this context, she said, the “Charting A New Course” study will be even more critical in helping the UW System determine whether priorities should be shifted in the future.

For another take on “fresh perspectives,” Lyall noted the new edition of the “Mindset List” produced each year by Beloit College. She said the list is a reminder that today’s students see things with different cultural references.

Lyall also reported on some of the many activities by UW campuses, faculty, and staff over the summer. They include:

Board says farewell to Chancellor Zimpher 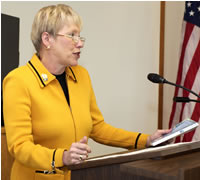 With an extended standing ovation to reflect its gratitude, the Board of Regents on Friday thanked departing Chancellor Nancy Zimpher with a resolution of appreciation for her tireless efforts at UW-Milwaukee.

In presenting the resolution, Regent Jose Olivieri of Milwaukee said Zimpher’s efforts have resulted in a stronger UW-Milwaukee in all facets of campus and community life.

“It is up to all of us to now build on that foundation,” Olivieri said. “There is a lot left for us to work with.”

Zimpher thanked board members, fellow chancellors and President Lyall for their support during her five years as chancellor and for giving her the tools she needed to excel.

“Much of what I learned about being a chancellor I learned right here in this room,” Zimpher said. “Your persistence has been of benefit to me and of great benefit to UWM.”

Zimpher said as she begins her new position as president at the University of Cincinnati, she will take with her several lessons learned during her time in Wisconsin, chiefly the importance of vision and collective action.

In full, she said, her lessons learned are best summed up through a statement from the book, “All I Need To Know I Learned In Kindergarten”: “No matter how old you are, when you go out into the world, it is best to hold hands and stick together.”

Read the Resolution of Appreciation for Chancellor Zimpher pdf

In accordance with state statutes, the Board of Regents made its annual adjustment of salary ranges for UW senior executives earlier this week in a teleconference meeting. No pay raises were approved.

At Friday’s meeting, Regent Nino Amato of Madison raised concerns about the process that led to the teleconference meeting to adjust the salary ranges.

A fact sheet with more details is available.

In other business, the board approved the following resolutions:

The Board of Regents will hold its next meeting on Thursday, Oct. 9, and Friday, Oct. 10 on the UW-Oshkosh campus.