MADISON – The University of Wisconsin System Board of Regents has unanimously approved broad organizational changes in the UW System, giving chancellors new leadership roles and altering the relationship between institutions and the System’s central administration. 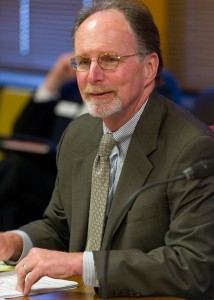 At Thursday’s meeting of the full Board, UW System President Kevin P. Reilly told Regents that the changes will help the UW System, already one of the nation’s most respected and admired higher education systems, to evolve “in ways that will have us be more effective, more efficient, more nimble, more innovative, and more entrepreneurial.”

The changes proposed by Reilly call for the System’s 14 Chancellors to assume new leadership roles and more control over budgeting, financial management, and other operational decisions.  UW System Administration, meanwhile, will take on a more consultative role, effectively changing how institutions relate to the central administrative offices.

Reilly noted that his proposed changes are based in large part on the recommendations put forward by a special advisory committee he convened in May.

Regent Chuck Pruitt, who chaired that committee, reported to the Board that committee members “strongly believed that institutions must be allowed to operate with greater flexibility and responsiveness, to develop innovations that lower costs and raise new revenues, and to take advantage of opportunities for growth in the marketplace of education and research.” 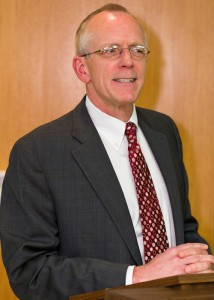 “This new model of leadership and administration envisions a System Administration that is more focused on its essential tasks and streamlined in its operations – a decision-making environment in which greater authority, responsibility, and accountability for performance is vested in the UW System institutions and their leaders and those institutions enjoy the flexibility to operate in a more innovative fashion,” Pruitt said.

The Committee’s report included 21 recommendations that encourage President Reilly to lead a serious, long-term shift in the orientation and operation of UW System, from the current more centralized model to one that includes greater distribution of authority and responsibility to UW institutions.

Pruitt told the Board that while the new model proposes significant changes, it also is accompanied by continuity. He said the new model assumes that the Board of Regents will continue to serve as the governing board for all UW institutions. The Board will also continue to place a high priority on advancing the Growth Agenda for Wisconsin and Inclusive Excellence. Further, the historic roles of the Regents, the President, and System Administration – for providing leadership and advocacy – will remain intact, Pruitt said.

“Above all else, the commitment of the University of Wisconsin System to exceptionally high academic standards, to the principles of broad access and affordability, and to the progressive aspirations of the Wisconsin Idea – is unchanged and unwavering,” Pruitt said.

“We must allow institutions to operate with greater flexibility and responsiveness, to develop innovations that lower costs and raise new revenues, and to take advantage of opportunities for growth in the marketplace for education and research,” Pruitt said.

Reilly highlighted three major areas where he’s recommending shifts in responsibility and accountability: restructuring the process for approving new degree programs; refocusing UW System’s auditing resources on work that relates to enforcing Board policies and fiduciary responsibilities, while delegating to the institutions more local responsibility for programmatic reviews; and a more targeted approach to UW’s investment in economic development.

“This is the beginning of a long-term change process,” Reilly said.

The Board unanimously approved a resolution in support of that plan.

Reilly reminded Regents that these savings cannot be achieved without some risk. “Cutting such a significant share of any organization’s budget dictates that it forego some activities, using remaining resources to focus on higher priorities,” Reilly said.

Regent President Michael Spector said the proposed changes to how the UW System operates result from “a rare confluence of challenges and opportunities,” including the continued decline in state funding for the UW System and the legislative requirement to make major cuts in System administration, as well as the unprecedented new operational flexibilities provided in the budget.

“The unexpectedness of this opportunity does not detract from its potential for true transformation,” Spector said.

Regent Jeff Bartell, who was a member of the Advisory Committee, underscored the significance of the changes proposed in the committee’s report and accepted by Reilly. “This report suggests a sea change in attitudes, in relationships, in authority, even in culture, of the System. It’s very important to recognize that it isn’t just a reaction to a cut in budget. It is a major change in the way the System operates.”

Bartell added that Reilly’s response to the committee’s report reflected “an enthusiastic acceptance of the recommendations.”

Responding to a question from Regent Brent Smith about how the Board’s role might change under the new model, Reilly noted that the plan involves long-term, transformational, cultural change and not all answers are yet known. More immediately, however, he noted the new chancellor representation on his Cabinet and the opportunity to more directly shape the nature and substance of issues brought to the Board. Reilly also pointed out that changes to the academic review process, for example, would free up the Board to devote more time to broader policy issues.

Regent José Vásquez expressed concern that the Board remain actively involved in the decision-making process and not simply a body to give “rubberstamp” approval to issues that effectively have been already decided.

UW-Madison Chancellor David Ward, reflecting on his national and international experience with systems of higher education, told Board members that debate over the role of systems is not uncommon. “All systems are thinking about how to create a more federated, more campus-structured situation,” Ward said. “But in becoming more institutionally focused, there’s still a need for coordination, whether it’s a system or something else. There will always be that need and we need to figure out how to nuance that as well as nuance the mission. It’s not just Wisconsin doing this. We may, in fact, have an opportunity to lead because it’s not very easy to do.”

Regent Tony Evers, the state superintendent of public instruction, urged the Board to approach the new organizational model “with eyes wide open.” Citing the Milwaukee public schools as an example, he noted that decentralization can sometimes lead to inconsistent quality and duplication of services.

Regents offered resolutions of appreciation to two colleagues whose terms of service have ended: Regent Tom Loftus of Madison and Regent Danae Davis of Milwaukee.

In presenting the resolution for Regent Loftus, who’d been on the Board since 2005, Regent Judy Crain cited his long record of public service to the state and the country. “There has been no more passionate, effective voice emphasizing the fundamental responsibility of the state of Wisconsin to its citizens to provide a comprehensive system of quality higher education accessible to all,” Crain said. “This Regent’s consistent, persistent, and insistent focus on our students and their voices has been remarkable.” 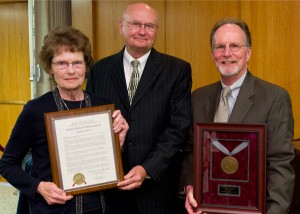 Regent Loftus told the Board, “The major accomplishment is to make sure that everyone knows that the System is the future of higher education in Wisconsin. I have to really compliment the leadership of this board during that period when the System was under question.”

Loftus also urged the Board in the future to consider “fitting the size of the university system to the resources that the legislature is willing to provide.”

In recognizing Regent Danae Davis, a Board member since 2003, Regent Chuck Pruitt noted her abiding passion for people, policy and politics. “In her time here, Danae has made us all focus on things that really matter, that without her might have fallen to the wayside,” he said.

“We have all seen countless times and in countless places Danae’s advocacy for the simple but powerful idea that ultimately we will never achieve true institutional excellence without diversity and equity,” Pruitt said. “Her fearless advocacy for keeping this university system intact, and her insistence early on that we ‘be for’ something was both inspiring and incredibly important.” 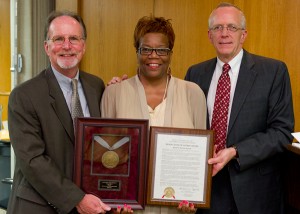 “I am extremely proud of the fact that this Board and the leaders throughout our System and across our campuses have had the courage to do the right thing,” Davis said. “Examples that come to mind include our Systemwide holistic admissions policy, our steadfast support of domestic partner benefits, and our unabashed commitment to finding ways to exemplify our commitment to diversity and inclusion throughout our educational ecosystem.”

“At the end of the day, if you keep your eyes on the students as the prize, you will all do the right thing in these changing times,” Davis said.

The UW System Board of Regents will hold its next meeting on October 6-7, at UW-Green Bay