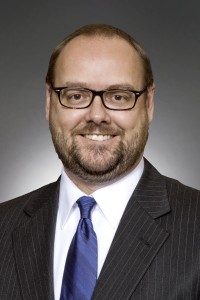 The University of Wisconsin System Board of Regents today approved Leavitt’s appointment, following the recommendation made by a selection committee. Leavitt will step into his new leadership post on November 1, 2014.

Leavitt has served since 2009 as vice president for University Advancement at the University of North Georgia (UNG), a multi-campus comprehensive public university of 16,000 students. He co-chaired the university’s strategic plan steering committee that created Engaging North Georgia: Planning for Excellence 2014-2019. Leavitt had the overall leadership responsibility for the university’s fund raising program and campaigns, the Foundation, and alumni relations’ activities. He led the campaign Living Our Values – The Campaign for North Georgia, which concluded in June 2012 after raising $44 million towards a $40 million goal. Leavitt led the merger of two philanthropic foundations to form a single foundation with over $55 million in assets

Leavitt chaired the Complete College Georgia Committee on Financial Barriers to Completion,which spearheaded an initiative to increase access, retention, progression and completion of college for students in the north Georgia region. Under his leadership, over $1 million was raised specifically for scholarships in 2013-14. Leavitt also created the Presidential Scholarship Program at UNG to attract and retain high-ability students.

Leavitt, while a chemistry professor at the University of West Georgia, was twice named Outstanding Faculty Member of the Year (1999, 2005) by the Student Government Association. He was named Honors Professor of the Year in 2004.

“The Regents and I were impressed with Dr. Leavitt’s vision and his powerful commitment to higher education. He brings to this role a unique professional background, both as a faculty member in chemistry and a highly successful advancement executive,” said UW System President Ray Cross. “It’s clear that Dr. Leavitt has a deep understanding of what it takes for a university like UW-Oshkosh to succeed, and how important that success is for students, northeast Wisconsin, and the state.”

“The University of Wisconsin-Oshkosh is truly an institution where excellence and opportunity meet, a place where values and mission are at the heart of the university. I am impressed with the university’s high quality educational environment, its leadership role in economic development, and its proven ability to respond to the needs of the region,” Leavitt said.

“UW-Oshkosh also effectively engages faculty, staff, students, and community members in pursuit of its mission. Together, we will build upon these collaborations to ensure that UW-Oshkosh and the region are prepared to meet the challenges of the future,” Leavitt said. “My wife, Karen, and I are honored and delighted about becoming part of the UW-Oshkosh community.”

“UW-Oshkosh has shown a tremendous ability to innovate and lead change in many important areas including sustainability, liberal education reform, and the development of student entrepreneurs. Dr. Leavitt has the creativity, energy, and vision to ensure that we continue to make progress on these initiatives while helping us to anticipate and address the next challenges in higher education,” said Dr. Barbara Rau, from UW-Oshkosh’s College of Business, Management and Human Resources, who chaired the 21-member search-and-screen committee.  “Dr. Leavitt also brings a unique ability and desire to collaborate with our education, community, and business partners who will be key to helping us meet these challenges. His enthusiasm for our campus and everyone he met while he was here was palpable.”

“UW-Oshkosh is the third largest of our 26 campuses – this is a big job. Andy Leavitt has a reputation as a very strong and effective leader. We are confident he will be a fine fit for the campus and will do an excellent job at Oshkosh,” said Regent Gerald Whitburn of Wausau, chair of the special Regents committee that interviewed all of the finalists with Cross.

Leavitt will be UW-Oshkosh’s 11th chancellor, succeeding Richard Wells, who announced last January that he would step down in August 2014. Wells served as the university’s top administrator for 14 years.

In line with market-based compensation guidelines approved by the Board of Regents in October 2013, Leavitt will earn $240,000 as chancellor.

Leavitt and his spouse, Karen, have three children and 1 granddaughter.

The University of Wisconsin-Oshkosh, with an enrollment of more than 13,900 students from across the state and beyond, is the third-largest university in Wisconsin. Supporting the institution’s more than 140-year tradition of leadership and innovation, including the transformation of general education, UW-Oshkosh’s respected faculty members have earned a host of UW System Board of Regents Teaching Excellence Awards. The University offers more than 70 baccalaureate and graduate degree programs in the colleges of Business, Education and Human Services, Letters and Science, and Nursing, which began offering the University’s first doctoral degree (Doctorate of Nursing Practice) in fall 2010. Serving as an educational and cultural anchor for the 1.2 million residents of northeastern Wisconsin, UW-Oshkosh champions the economic well-being of the New North with an annual impact of more than a half-billion dollars, directly and indirectly creating 9,000 jobs and collaborating with partners in an array of catalytic economic development initiatives. For an institutional overview, visitwww.uwosh.edu/strategicplan.