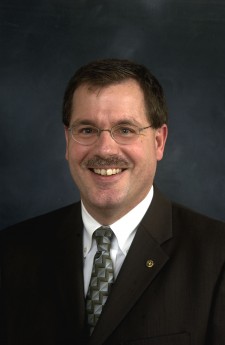 MADISON, Wis. – University of Wisconsin System President Kevin P. Reilly today announced that Dr. Dean Van Galen, Vice President for University Advancement at the University of West Florida (Pensacola, Fla.), has been recommended as the next Chancellor of UW-River Falls.

Reilly and the Board of Regents Special Committee for the UW-River Falls Chancellor Search made the recommendation after interviewing finalists identified by the campus Search and Screen Committee.  The full Board of Regents is expected to act on the appointment in January.

“Dr. Van Galen, a Wisconsin native and UW alumnus, brings to this role a unique professional background, as both a faculty member in Chemistry and a highly successful advancement executive,” Reilly said.  “That’s a rare combination of capabilities, and I’m confident that he is well prepared to advance the academic reputation of UW-River Falls, as well as its core role in helping a rapidly growing part of Wisconsin pursue its future.  Our UW institutions are engines for economic growth, and Dean knows how to make that engine run at peak performance.”

Since 2003, Van Galen has provided leadership for alumni relations, development, marketing communications, and the University of West Florida Foundation.  He previously served as Vice President for Advancement at Truman State University in Missouri.  Van Galen began his academic career in 1987 at Truman State University as a Chemistry Professor, earning honors as Educator of the Year in 1988-1989.  The Council for the Advancement and Support of Education (CASE) named him Professor of the Year for the state of Missouri in 1991.  In 1994-1995 he was an American Council on Education (ACE) Fellow.

“My goal will be to work with the campus and community to build on the university’s strong student-centered tradition and vibrant strategic plan,” said Van Galen.  “There are many aspects of UW-River Falls that I find exciting, including its deep commitment to student engagement, sustainability, global literacy, and building an inclusive campus that is connected to the entire St. Croix Valley region.”

“It is clear to me that UW-River Falls is already on a path to becoming a university of uncommon excellence,” Van Galen added.  “It will be my job to support and enhance these efforts, to build relationships beyond the campus, and be certain that the good news from UW-River Falls is heard throughout the region and the State of Wisconsin.  On a personal note, my wife, Mary, and I are both Wisconsin natives and are looking forward to ‘coming home’ and becoming part of the River Falls community.”

Van Galen earned his Bachelor of Science degree in chemistry from UW-Whitewater.  After earning a Ph.D. in analytical chemistry from Kansas State University, he worked as a post-doctoral research associate at the University of California, Berkeley.

“People were impressed by Dr. Van Galen’s varied experience in academics, strategic planning, fundraising, and leadership,” said Regent Brent Smith of La Crosse, chair of the Regents’ special committee.  “He has played many different roles and, by all accounts, has excelled in every one of them.  His enthusiasm about the future of UW-River Falls was evident.  We could tell that he is someone who will work well with a wide variety of stakeholders, from students and faculty members to community members and legislators.”

Serving with Smith on the special committee were Regent Vice President Chuck Pruitt, Regent Eileen Connolly-Keesler, and Regent José Vásquez.  If confirmed by the Board of Regents, Van Galen would become UW-River Falls’ 18th chancellor, succeeding Chancellor Don Betz who left to become president of Northeastern State University in Oklahoma.

A 19-member search and screen committee, chaired by UW-River Falls Physics Professor James Madsen, conducted the national search and recommended Van Galen as one of five finalists to Reilly and the Regents.  All finalists participated in a series of meetings and receptions on the campus from Nov. 21 through Dec. 6, interacting with faculty, academic staff, classified staff, students, and community members.

“I am proud of the way the search committee, campus, and community worked together, and I speak for everyone when I say that we were very impressed by the high caliber of talent in this candidate pool,” said Madsen, a 20-year veteran of the campus.  “Dr. Van Galen stood out in that group because of his tremendous commitment to the values this campus is known for, including our shared focus on the student.  He is someone who can help us move to the next level, and help us spread the word about all the good things that are, and will be, happening here.”

Other finalists were Dr. William G. Colclough of University of Wisconsin-La Crosse; Dr. Raymond W. Cross of Morrisville State College; and Dr. Ellen J. Neufeldt, of Salisbury University.  Dr. Geri Malandra of the University of Texas System was also a finalist, but withdrew from the search prior to being interviewed by the Regents.

UW-River Falls, ranked by U.S. News and World Report as one of America’s Best Colleges of 2008 (Midwestern University-Master’s), has an enrollment of more than 6,000 undergraduate students and nearly 500 graduate students.  The university employs about 800 people and is the western-most institution in the 26-campus University of Wisconsin System.  The chancellor of UW-River Falls is responsible for an annual operating budget of approximately $95 million.