University of Wisconsin System Board of Regents

MADISON – The UW System will spend the next academic year focusing on managing quality on each UW campus, increasing student success and delivering more educated graduates for the state’s continued quality of life and the economic future of Wisconsin.

In her remarks at the Sept. 13 board meeting in Madison, UW System President Katharine C. Lyall outlined her suggestions for three dimensions of quality on which the board should focus its attention.

She referred to a report released Thursday, which showed the UW System contributes $9.4 billion to the state economy each year. That’s nearly 10 times the amount the state invests in the university.

“The UW System can no longer expand our contributions to Wisconsin simply by growing our enrollments,” Lyall said. “We must focus on generating more successful outcomes for our current student body.”

Lyall proposed that the UW System enact three specific measures of quality for the upcoming year.

First, she asked the board to focus on increasing student retention and graduation rates. She plans to deliver a review of these goals at each campus to the board in December.

Third, Lyall said she hopes the board can gradually restore faculty positions to better balance faculty and instructional academic staff throughout the system. More than 500 faculty positions were cut system-wide in the past 5 years, and restoring those positions will give students consistent faculty involvement in their academic lives, she said.

While these goals will be difficult, especially if further base budget cuts are considered, and while they cannot measure the full extent of quality education throughout the system, Lyall said the measurable indicators can show the public how state policies and university decisions affect the UW System and their communities.

Lyall also indicated that next month she plans to propose an approach for the fall 2003 admissions process. The approach will include maintaining an enrollment target of 134,500 FTE students for the 2003-05 biennium, she said. Admissions policies must allow students and their parents access to the UW System without hardship, but she said the board will have to re-evaluate enrollment if the system is subject to further base budget cuts.

“Through our efforts to engage Wisconsin this year, we can make the consequences of decisions more transparent, avert surprises, and focus our own efforts more precisely,” Lyall said.

Regent Jose Olivieri later said he did not necessarily believe reducing enrollments to match the level of support per student would best benefit the state, but rather that the university should work toward increasing enrollments to bolster the workforce with more educated graduates. The UW System currently has an enrollment of approximately 160,000 students.

“If it comes to that, it should only be because we are forced,” Olivieri said.

Instead, Olivieri said the university should examine policies that affect students’ experiences, such as the structure of the first year and the focus on research.

Regent Phyllis Krutsch noted that while the board has some say in how funding is used at UW campuses to meet its goals, the board is not in control of the state budget.

“Whether we have the resources is more of a political decision; it’s not our decision,” Krutsch said.

Lyall also outlined for the board some of the summer accomplishments of UW faculty, staff and students. They included:

The winners of the 2002 Teaching Excellence Awards received standing ovations at a Friday presentation of the honors, which recognize their dedication to teaching and commitment to the UW System.

Regent Roger Axtell, who chaired the selection committee, noted that all candidates were eminently qualified, and selecting the winners was challenging, yet rewarding.

“The members of the UW community we honor today are very committed to the teaching and learning part of their university’s mission,” Axtell said. “While they all go about this task in different ways, they share several striking characteristics: a distinct philosophy of teaching and learning, a willingness to innovate in order to meet the needs of students, a passion for their discipline, and a commitment to constant self-examination and improvement.”

The 2002 Teaching Excellence Award winners are: 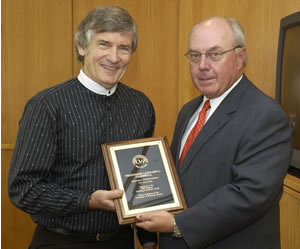 Regent James Klauser introduced Gambrell, whom he described as an “outstanding university citizen,” often called on by the Eau Claire community for his political science expertise.

In accepting his award, Gambrell said he gained his knowledge and experience as a professor from students. He said challenging students and focusing on their individual experiences is part of his ultimate goal to respect students.

“The students can tell whether or not you believe in what you’re doing,” Gambrell said. “It’s important that you make it clear to students that it matters.”

Each winner received $5,000 for professional development. Gambrell indicated he would donate his sum to the UW-Eau Claire Foundation to be used for student scholarships.

Gambrell is an emeritus professor at UW-Eau Claire, where he was well known for his classes about Vietnam. He taught at Eau Claire for 35 years and has since moved to New Mexico. He remains active in programs at Eau Claire and plans to continue leading for-credit student trips to Vietnam.

“Though I’ve left Wisconsin, I have not forgotten what it’s done for me,” Gambrell said. 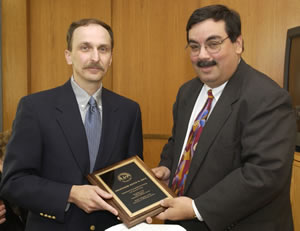 Olivieri said Rice is often asked why he teaches when he could earn more money in the private sector.

“The answer is resounding and indisputable: he loves his students, his commitment to teaching and student learning are unwavering and his energy is tireless,” Olivieri said.

Rice said he believes successful teaching comes from the heart and the head, is best served with a sense of humor and inspires and encourages students to challenge themselves.

“In the end, students have to love learning,” Rice said. 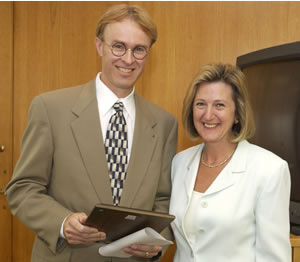 The honor was especially fitting for the 4-H program, now in its centennial year, Burmaster said.

Ellen Polglaze, a student and long-time 4-H member from Milton, told the Regents, first-hand, about the impact of the program.

She cited many strengths of the program and commended its diversity – it’s offered to all youth across the state and in many different fields. Noting the opportunities for leadership, Polglaze said many youth programs are run by adults, but 4-H allows students to do the planning and organizing.

She also talked about the importance of mentoring. The 4-H program enables older youth to get involved and help younger participants, she said, citing several specific projects from her area, including a Rock County after-school program for at-risk youth.

Polglaze also said 4-H has offered her many leadership opportunities at the local, state and national levels, including the chance to participate in national and state meetings and improve her public speaking skills. The latter were evident in her presentation to the Regents, which was articulate and well organized and for which, she had nary a written note.

“I can think of no better measure of the quality of our campuses than the individuals we honor here today,” Gottschalk said.

The next Board of Regents meeting will be October 10 and 11 on the UW-Whitewater campus.