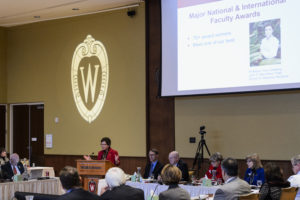 UW-Madison hosts the Board of Regents’ February meeting.

MADISON – The University of Wisconsin System’s array of academic programs is well aligned to meet the workforce needs of the state, now and into the future, according to a report presented Thursday to the Board of Regents.

“Our institutions produce well-rounded individuals who contribute to our society and economy – they are informed, engaged citizens,” said UW System President Ray Cross.  “As we set forth in our 2020FWD strategic framework, we are committed to preparing our graduates with critical thinking and creative problem solving skills. It is also vitally important that we provide degree programs in the UW System that are aligned with the projected highest growth occupations in Wisconsin.”

James Henderson, Vice President for Academic and Student Affairs, told Regents that 20 additional UW System degree programs were authorized in 2016, and these programs largely align with state and national demand trends, particularly in the areas of STEM (science, technology, engineering and math), healthcare and entrepreneurship fields.

Cross reminded Regents that while a public university cannot ignore the workforce demands of the state in which it lives, works and serves, that cannot be its only purpose as a university.

“Workforce development is important but it’s not the only thing we do,” Cross said. “We also want students to engage in self-reflection, to be better people as part of this process of engaging in the pursuit of truth. We want them to function as citizens, but additionally we want them to understand how they participate in society … and to engage effectively in the economy.” 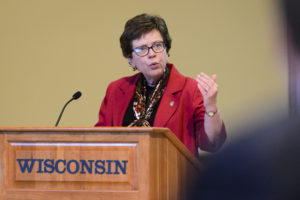 Host Chancellor Rebecca Blank told Regents that UW-Madison has maintained a high quality in education and research, but further efforts – including new state investment and flexibilities that will allow the campus to act entrepreneurially – will be essential to securing continued excellence in the future.

“I am very encouraged by the things the Governor and legislators have been talking about in terms of reinvesting in the UW, and I’m hopeful that we can all work together to change some worrisome trends,” Blank said.

Many of the benchmarks the university watches are promising, she said, noting, for example, that a new record for applications to attend UW-Madison has been set for three years in a row. Also, the average student now completes an undergraduate degree at UW-Madison in 4.07 years, Blank said, with the six-year graduation rate for all students at 85.2 percent. Blank said the figures show the university is closing the opportunity gap.

While there is plenty of good news, some causes for concern remain, Blank said, including declining research expenditures.

“This is something we’ve got to turn around,” she said.

In addition to greater reinvestment from the state, Blank said the university needs to be more entrepreneurial in developing strategies to grow new revenue sources.

Blank also announced Thursday that UW-Madison has signed updated transfer agreement with the state’s two-year colleges and is in the process of completing agreements with several of the state’s technical colleges.

In addition, Blank said that if UW-Madison receives sufficient new investment in the 2017-19 biennial budget, she is committed to guaranteeing at least one year tuition-free for first-generation Wisconsin students who meet the requirements of a proposed new “Badger Promise” transfer program.

“This is the sort of thing we can do when we are growing revenues and reinvesting back in our university to increase its quality, affordability, and reputation,” Blank said.

Jim Henderson, Vice President for Academic and Student Affairs, provided an update on a recent Math Workshop at which representatives from all UW System institutions got together to look at developing better pathways for implementing the common cut score for placement into credit-bearing math classes.

Three areas were identified for attention: designing appropriate math pathways depending on a student’s intended major; placing students into credit-bearing math courses as soon as possible, even if remedial coursework is required; and determining math placements based on multiple criteria, including ACT scores, high school grades, and UW placement tests.

“This is a good example of the value of a System,” said Henderson, noting how multiple institutions can provide information and collaborate in support of students.

In the first of two statutorily required Information Technology reports, the Committee received an overview regarding UW System Strategic Plans for major IT projects. In the coming year, the work of the Information Technology community will continue to emphasize strategy and information security. The Committee also heard a report on the status of four large IT projects underway in the UW System, including the UW System Oracle/PeopleSoft Human Capital Management Application upgrade; UW-Stevens Point’s implementation of Oracle/PeopleSoft Campus Solutions; replacement of the UW System Interactive Reporting Tool; and a new UW System Budget, Planning, and Forecasting System.

The Capital Planning and Budget Committee approved UW System’s request for the Criteria for Ranking Building Projects, which are used as the basis for prioritizing major capital projects for inclusion in UW System capital budget requests. The intended use of the criteria is to create a priority list of projects that address the greatest needs, highest academic priorities, and most cost-effective solutions to established facility deficiencies.

UW-Madison Vice Chancellor for Research and Graduate Education Marsha Mailick told Regents that the decline in state support in recent years has played a significant role in UW-Madison’s drop, for the first time since 1972, from the National Science Foundation’s top five universities nationally in research expenditures.

Mailick said strategies to do that include: increasing faculty size in high-impact fields; targeting units in clinical research data, science, and others; reducing over-regulation in research compliance; and modernizing research laboratories and facilities.

Regent Eve Hall, REDI committee chair, added that the UW must continue to pursue innovative public-private opportunities in addition to advocating for state and federal support.