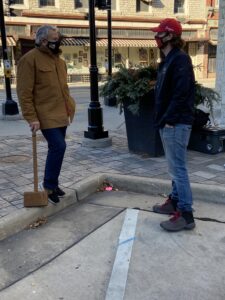 MADISON, Wis.—University of Wisconsin System President Tommy Thompson and Wisconsin comedian Charlie Berens of The Manitowoc Minute are urging state residents to obtain a free COVID-19 test at one of the state’s rapid-results “surge testing” sites.

Thompson challenged Berens to a smash-off in his latest “Smash COVID” video aimed at reminding UW System students and others to get tested and to continue behaviors that prevent the spread of the disease, including wearing a mask, social distancing, and washing hands.

“We all want to smash COVID, and I’m happy to join President Thompson in bringing attention to these free tests,” Berens said. “Keep ‘er Movin’ Wisconsin – through the COVID testing line.”

Since surge testing began in early November, more than 170,000 free tests using the Abbot BinaxNOW rapid-results antigen test have been administered at Wisconsin’s 22 surge testing sites on or near UW System campuses, identifying nearly 14,000 potential positive carriers of the virus who have been advised to isolate. The testing sites will be operable for several weeks, likely through Jan. 23, with UW-Madison closing its sites on Jan. 7.

“With our partners at the U.S. Department of Health and Human Services, we began surge testing in early November when the virus was raging across Wisconsin,” Thompson said. “Since then, the number of cases in our state has been dropping, and surge testing has been a critical factor because we could quickly identify potential cases.”

Thompson said Wisconsin residents should consider getting tested at a surge testing site now that the holidays are over – especially if they spent more time than usual outside of their home or socializing with people who are not in their household.

Thompson and Berens filmed the latest “Smash COVID” video in downtown Waukesha and on the campus of UW-Milwaukee at Waukesha. Thompson has also served as a spokesman for the “Stop the COVID Spread! Coalition.” Berens is the founder of The Manitowoc Minute, the popular weekly video featuring a uniquely Wisconsin perspective.