UW System is major driver of the Wisconsin economy 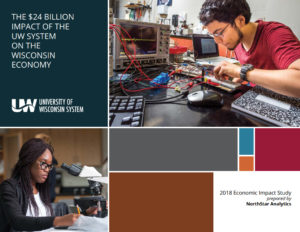 MADISON – The University of Wisconsin System contributes $24 billion to the state’s economy each year, which is a 23-fold return on Wisconsin’s investment in the university, according to a new study.

“We are grateful for the significant, long-term investment in the UW System made by the State of Wisconsin, helping to make it one of the finest systems of public higher education in the world,” said UW System President Ray Cross. “The 23-to-1 economic return on that investment generates a statewide impact on communities and rural regions in all 72 counties across Wisconsin.”

The UW System’s $24 billion economic impact in 2016-17 represents 7.7 percent of the total economic activity in the state, according to the study.

The study also shows that the economic impact of UW System campuses, organizations and activities create and/or support nearly 167,000 jobs annually – representing about 1 in 20 of the total number of employed workers in Wisconsin. UW System’s economic activity also generates over $1.1 billion in state and local tax revenues each year.

“The breadth of UW System activity is striking,” said Dr. David J. Ward, CEO of NorthStar Analytics, which conducted the study.  “With the state contributing slightly over $1 billion to the university system’s budget in fiscal year 2016-17, Wisconsin taxpayers are realizing a substantial return on their investment in the UW System.”

The 2018 UW System Economic Impact Study by NorthStar Analytics refreshes a 2002 economic impact report prepared for the UW System by the firm then known as NorthStar Economics. The new study shows the UW System’s economic impact measures have more than doubled in the years since. Ward will present the report to the Board of Regents at its next meeting on Aug. 23 in Madison.

“The biggest change since 2002 is the economic development activity the UW System is now involved in,” Ward said. “There is very significant startup activity, and it’s beginning to spread across the state.”

Each year, the UW System confers more than 36,000 degrees, and a very high percentage of recent graduates (more than 80 percent) stay and work in Wisconsin. “This continuing stream of new college graduates helps to replenish the talent base of Wisconsin’s workforce and provides skilled employees for Wisconsin businesses,” Cross said.

According to NorthStar, the updated study reflects a conservative view of the UW System’s overall impact, since it does not take into account some of the additional benefits the university provides to the state, including the cumulative effect of typically higher salaries of college graduates over time and the secondary impacts of sponsored research, entrepreneurship and innovation that naturally arise from university exploration and experimentation. The NorthStar document points out that the economic impacts of these additional benefits, while not included within the scope of the study, likely far outweigh those reported.

The UW System is a major source of research and innovation. More than $1 billion of sponsored research activity occurs on UW System campuses each year. The output of much of this research benefits citizens and businesses in Wisconsin, as well as across the nation.

“Thanks in large part to federal investment in knowledge and research, the UW System is widely recognized as a world-class system of higher education,” Cross said. “Studies by the Federal Reserve Bank and others have cited the power of academic research and development in the larger U.S. economy. This ranges from direct spending on research, to the transfer of knowledge to companies of all sizes, to the ‘human capital’ that comes with the creation of a skilled workforce.”

Cross added: “There are only 115 ‘R1’ (top tier) universities in the country, and Wisconsin is home to two of them: UW-Madison and UW-Milwaukee. As the state’s flagship institution, UW-Madison ranked 6th in 2016 for total R&D expenditures by the National Science Foundation.”

Each year, the Wisconsin Alumni Research Foundation (WARF), the Milwaukee Research Foundation and the WiSys Technology Foundation collectively generate hundreds of disclosures and patents, provide support for numerous innovations and licensing agreements and incubate and guide startups and spinoffs created by faculty, staff and students who are increasingly focused on shortening the pathways from idea to product commercialization.

“The UW System is becoming an increasingly energized and growing innovation ecosystem, with a new patent filed every 49 hours on average,” Cross said.

In addition to state support of the UW System mentioned in the study, the federal government is a primary source of student financial aid, encompassing approximately 70 percent of the more than $1.3 billion in aid provided to UW System students every year. Federal financial aid helps keep college accessible and affordable for tens of thousands of students each year.