MADISON, Wis. – With almost 182,000 students at 26 campuses, the University of Wisconsin System set a new enrollment record this year, according to preliminary Fall 2010 data.

For the academic year that began in September, UW System campuses reported 181,782 students – an increase of 2,873 over the previous year’s final enrollments, and an all-time record for the System. Over the past decade, UW System enrollment has grown by about 11 percent – representing a gain of over 18,000 students.

“People understand the value of a college education, and more of our students are working hard to complete their degrees,” said UW System President Kevin P. Reilly. “This enrollment growth demonstrates how UW System campuses are responding to growing demand, and strengthening the state’s workforce in the process.”

As part of its Growth Agenda for Wisconsin, the UW System has announced plans to increase the number of degrees granted each year by 30% over the next 15 years, producing an additional 80,000 new degrees above current levels. The Growth Agenda is the University’s strategic plan to benefit the entire state by producing more well-prepared college graduates, creating more well-paying jobs, and strengthening local communities.

“Our success in this area is particularly noteworthy during a time of tight resources. We’re more productive and more efficient than ever before, but we’re also more challenged,” said Reilly. “State funding for the UW System, measured either on a per-student basis or as a share of our total budget, has declined significantly over the past 10 years.”

“We take pride in our productivity gains and efficiency, and we’ll continue to keep a close eye on the bottom line. At the same time, we know that maintaining educational quality and achieving the Growth Agenda goals will require state reinvestment and new flexibility to employ more efficient business practices. These important economic gains cannot be achieved on the margin,” said Reilly.

These preliminary enrollment figures are historically within about one-half percent of final numbers. Final enrollment reports will be available in early 2011, including both headcount and full-time equivalent (FTE) enrollment breakdowns, based on the number of full-time and part-time students, along with additional information on student characteristics and demographics. 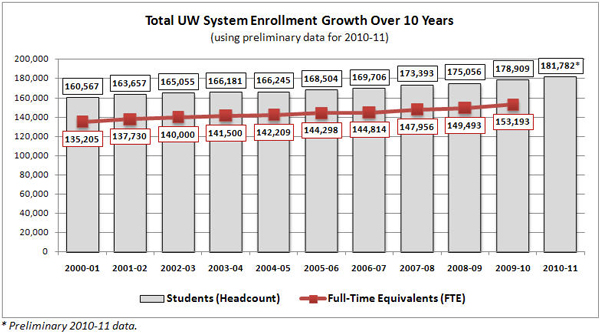