MADISON-The University of Wisconsin System eliminated the future use of so-called “back-up” positions with a unanimous vote Friday (Nov. 11) by the Board of Regents, which has been working for several months to make substantial reforms to the university’s employment policies and practices.

“We are a long way down the road of reform,” said Regent Charles Pruitt of Milwaukee, who chairs the Board’s Business, Finance and Audit Committee. He thanked his fellow committee members and Presidents Walsh and Reilly for their persistence, patience and diligence on these issues.

Pruitt also reminded the full Board that the Business and Finance Committee wanted to maintain “a delicate balance” in reforming the university’s personnel procedures and practices, and strove to fix policies that needed attention, while making sure the university can attract academic talent.

The Board voted to authorize UW System President Kevin P. Reilly to offer new limited appointees up to six months notice of termination, in lieu of what has been known as a “back-up” appointment.

Regent Peggy Rosenzweig of Wauwatosa pointed out that the term “back-up” itself was “being abolished, per the urging of our Regent President.”

Regent Brent Smith of La Crosse asked the Business, Finance and Audit Committee to look further into fixed-term contracts as a possibility. But, he stressed the importance of remaining competitive and giving the president much-needed flexibility.

“I want us to consider fixed-term contracts, but I want to make sure that in all that we do, we give the UW System president maximum flexibility so that he can land the best people for the job,” Smith said.

Regent Michael Spector of Milwaukee asked that the Board give consideration to some possible protections for “at will” employees.

“In many cases, we’re asking people to come in here and be change agents, and sometimes that creates discord among the status quo,” Spector said. “These folks may need some protections so that they can bring about the changes we want them to effect.”

Regents took time Friday to commend those involved in efforts to ensure cooperation between UW-Madison, the City of Milwaukee, UWM, and the state in guiding the UW’s role in public-health education. The Board voted to approve the name of the UW School of Medicine and Public Health, formerly known as the UW Medical School, and ensured that the school, based at UW-Madison, will step up efforts to bring public-health education to the citizens of Milwaukee.

Education Committee Chair Elizabeth Burmaster of Madison emphasized that teamwork will be essential to fulfilling the state’s public-health needs.

“This is really not a competition between Madison and Milwaukee, despite how it has been portrayed in the press,” Burmaster said. “It is about bringing medicine and public health together for all the people of Wisconsin.”

Burmaster said Regent Spector represented the Regents in these dialogues, which he said “exceeded good-faith” efforts the Board hoped for in terms of funding and developing short-term and long-term strategies.

Regent Peggy Rosenzweig, who proposed an amendment to the resolution that will require annual evaluations of the school’s success, thanked the Board for thoroughly examining the issue of public health in Wisconsin.

“The public-health needs of our state are issues we need to pay attention to,” Rosenzweig said. “With this resolution, we have the opportunity to use a new model that will allow the practices of academic medicine and the education of public health to come together.”

Milwaukee Mayor Tom Barrett told the Board that Regents, parties from the city of Milwaukee, UWM, and UW-Madison worked together in good faith to bring forward an agreement of which he felt all could be proud.

“It was a challenge,” Barrett said, “But where we started out, and where we are today, is quite an improvement. There has been more collaboration in the last month than there has been in Wisconsin in many, many years. Stay with us. We’ll need your help, but together we can help the citizens of Milwaukee, and Wisconsin.” 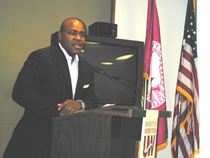 The UW System will have more support for efforts to become a national leader in recognizing and championing diversity in all forms with the new President’s Council on Diversity, UW System President Kevin P. Reilly announced Friday.

Reilly named Cory Nettles, former Secretary of the state Department of Commerce, as the council’s chair.

“My hope is that this President’s Council on Diversity will help to assure that all UW students will gain the many benefits derived from diverse academic experiences and inclusive campus environments,” Reilly said. “I’m confident that with their talents and expertise, and Cory’s leadership, the Council will be a driving force for maximizing UW student and workplace diversity.”

Nettles commended the President for his work on promoting diversity throughout the UW System. He said he agreed to serve as the council’s chair because President Reilly and UW leaders were “committed to this cause for all the right reasons.”

“Recruitment and attraction of diverse people is the single most important thing that any organization can do,” Nettles said. “I look forward to working with you to make this the preeminent university that we would all have it be.”

Although additional members will be named soon, the current members of the council include:

President Reilly and the Board marked Veteran’s Day by thanking student veterans for the services they provide to the nation and the UW System, and acknowledging the tremendous benefits of programs that help veterans earn college degrees.

“By supporting the GI Bill, and other veterans-aid programs, we give veterans a greater opportunity to earn four-year degrees, and, in turn, we succeed in our mission to serve as an economic engine for Wisconsin,” Reilly said. 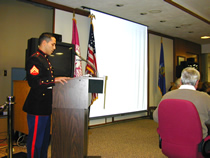 Representing more than 3,000 student veterans throughout the UW System, Marine Corporal Stephen Michael Terry thanked the President and the Board for the recognition and support.

“The services provided for student veterans were very helpful in tying up loose ends before I left for Iraq last year, and they also have helped me ease back into the student lifestyle since my return home,” said Terry, who interrupted school at UW-Madison to serve a one-year deployment with a Marine Corps infantry unit. “On behalf of my fellow student veterans, thank you for acknowledging the hard work and sacrifices we make as students and soldiers.”

Reilly also reminded the Board of Gov. Jim Doyle’s recent veto of a stem-cell ban, which would have slowed UW’s success as a leading scientific research institution.

“This action protected this university’s capacity for progress, not just in health research and scientific discoveries, but also in growing the economic vitality of our state through our leadership in the biomedical field,” he said.

As part of his report, Board of Regents President David Walsh of Madison told the Board that Regents can help inform the citizens of Wisconsin about the need to reinvest in the state’s public university system. He noted that rising tuition, falling state support, and a continuing gap in financial aid, are reducing access to students.

“For the first time ever, tuition is greater than GPR investment at UW-Madison,” he said. “We are starting to lose our star faculty – and research grants are a big part of what drives this engine. We need to turn the corner and persuade the state to invest in higher education.”

The Board of Regents also heard reports from committees and took the following action:

In closed session, the Board approved the appointment of Patrick Schmitt as Dean at UW-Waukesha. Schmitt’s appointment will be effective Jan. 1, 2006, at an annual salary of $92,000.

The Board of Regents will hold its next regular meeting Dec 8-9, 2005, in Madison.