MADISON, Wis. – The University of Wisconsin System Board of Regents today unanimously approved a new policy to develop strong, collaborative relationships with the sovereign American Indian tribes in Wisconsin.

“As the state’s public university, the UW System has an obligation to serve each American Indian Tribe in Wisconsin to its fullest capacity,” said Regent President Edmund Manydeeds III, an enrolled member of the Standing Rock Sioux Tribe. “Recognizing that each American Indian Tribe has its own unique needs, coordination and collaboration between the University and Tribal, state, and local governments is vitally important.”

“I believe this is a giant step forward – but it’s only the first step,” said UW System President Tommy Thompson. “I am humbled to be part of this … but I will not personally be satisfied until enrollment of Native American students is up.”

Under the policy, the UW System will consult with tribes on numerous issues affecting Native people, including:

The policy also calls for an annual meeting between the UW System President and tribal leaders along with chancellors or other university employees.

“We appreciate the initiative by university leaders to address the need to have regular discussions between tribal leaders and the university,” said Ron Corn, Chairman of the Menominee Indian Tribe of Wisconsin.

Samantha Skenandore, a member of the Ho-Chunk Nation and a UW-Madison graduate, urged Regents and others to address cultural needs on campus. “You’ll never see the numbers go up unless the Board of Regents and others know what students need on campus,” she said.

Jared Blanche, Education Director from Red Cliff Band of Lake Superior Chippewa, echoed that call, saying too often Native American students don’t feel welcome on campus. “We have to make education a thing that’s right for all of us,” Blanche said.

Brandon Yellowbird-Stevens, Vice-Chairman of Oneida Nation, added that it’s important to have an understanding of the baseline numbers for students, faculty, and staff. “That’s a good staging point to set goals,” he said.

“We have a duty to communicate going forward, especially regarding education,” said Regent Amy Bogost. “This is just the beginning.”

Regents recognize one of their own 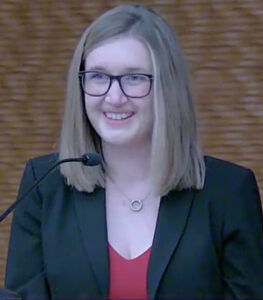 The Board presented Regent Emerita Olivia Woodmansee with a resolution of appreciation, recognizing her dedicated service the past two years.

Regent Vice President Karen Walsh, who presented the resolution, said she still doesn’t know how Woodmansee found time to do all the things she did for the Board while also a full-time student. After her term ended, Woodmansee continued to work with UW System as a major coordinator of the Vax Up! “70 for 70” scholarship campaign.

Woodmansee called it “an incredible honor” to serve as the student representative on the Board, adding that being on campus allowed her “to see the actual implications of the policies we passed.”

Woodmansee, who will graduate from UW-La Crosse later this month, said she is also proud to be a graduate of the UW System. “I wish more people knew the power and impact of the UW System that I’ve seen over the last two years,” she said.

The University of Wisconsin Board of Regents will next meet on February 10-11, 2022, at UW-Madison.