Research capacity must be preserved to protect UW System’s future, board told

MADISON – Research at University of Wisconsin System campuses has made major contributions to state and local economies, and continued public and private funding for research will help drive the UW System’s future, according to presentations to the Board of Regents on Friday (April 11).

According to National Science Foundation statistics, UW-Madison led the nation’s universities last year in terms of research and development expenditures, with $554 million in gifts, grants and contracts, said Martin Cadwallader, dean of the UW-Madison Graduate School.

Much of this funding is awarded by federal agencies or from out-of-state, and it is especially important during this time of fiscal crisis, he said. Research dollars and the work of the Wisconsin Alumni Research Foundation support Wisconsin’s economy through jobs and technology transfer – the process of developing and licensing research advances for commercial markets, Cadwallader said.

“These idea of these research funds isn’t just to do research, get published and leave it at that,” Cadwallader said. “The idea is to return it to society.”

Cadwallader told the board that the campus will continue to strengthen undergraduate research opportunities, but faces a significant challenge in protecting the campus’s ability to recruit and retain highly respected researchers, who in turn, help attract other talent to campus.

“It is a critical time to preserve that competitive advantage,” Cadwallader said. “If we lose that critical mass, I’m not sure how we build it back up again.”

Cadwallader pointed out that the university’s research funding helps create 20,000-25,000 jobs in Wisconsin, according to a multiplier formula developed by the Association of American Universities. But budget cuts will hinder the spin-off benefits from research, he added.

“Each faculty member on average generates about $200,000 a year in research grants,” Cadwallader said. “If you eliminate 50 faculty positions, you lose $10 million in research funding, plus the jobs created through the multiplier effect.”

Chancellor Thomas George of UW-Stevens Point updated the board on similar advances at other UW System institutions, where technology transfer is supported by WiSys, a foundation established through WARF to manage intellectual property of UW campuses other than Madison.

George said he recently returned from a NSF meeting in Washington, D.C., that focused on the importance of undergraduate research opportunities, such as those found throughout the UW System.

“At comprehensive campuses, you really can’t do the research without undergraduates, who rely on faculty members,” he said. “It’s a nice symbiotic relationship.”

George relayed several examples of successful UW research efforts, including the work of Professor Diane Caporale at UW-Stevens Point, who is leading biotechnology research that may lead to a new vaccine for Lyme disease; Professor James Cook of UW-Milwaukee, whose research in chemistry is currently under consideration by WiSys for development in the pharmaceutical industry; and Professor Brian Smith of UW-River Falls, who is leading students in plant breeding research that will benefit Wisconsin fruit growers.

Regent Roger Axtell of Janesville suggested that a plan to preserve the UW System’s research potential should be included in a long-term study of the future direction and mission of the university. Such a study could begin this summer, several regents said Thursday.

“We need to do something to protect that egg in our basket,” Axtell said.

Regent Toby Marcovich of Superior reminded the board that the Madison Initiative included funds to support new faculty in new and emerging fields of study at UW-Madison, but the campus revitalization effort is now stalled due to budget cuts.

Regent Jose Oliveri of Milwaukee said he was impressed to hear that UW-Madison research has led to the creation of 4,000 “knowledge jobs” through the campus’s Research Park.

“Those are just the kind of jobs that we want to bring to Wisconsin,” he said.

Regent David Walsh of Madison said the information reaffirms that the greatness of the university is in the greatness of its faculty-and that message needs to be conveyed to faculty the UW System is trying to recruit.

“We need to tell the ophthalmologist at the University of Michigan and the genome specialist at Harvard that this is the place to be,” Walsh said.

Regent Peggy Rosenzweig of Wauwatosa said the research presentations offered an inspiring message for the board to share with the state.

“The stories are wonderful, and they need to be communicated,” she said.

Board of Regents hears reaction to Joint Finance Committee action

The Legislature’s Joint Finance Committee has directed the UW System to modify its plans for making budget cuts for the remainder of the 2002-03 fiscal year, and the bulk of the cuts would come from UW System Administration, Regent President Guy Gottschalk of Wisconsin Rapids told the board Friday.

The Wisconsin Department of Administration had approved the system’s plan to cut $8.26 million by the end of this fiscal year without significant harm to students, Gottschalk said. But the Joint Finance Committee, which had final say over the plan, voted instead to take the cuts from UW System Administration – which comprises the smallest portion of the UW budget.

“This is especially difficult as we are facing at least $100 million in state cuts to our spending, a challenge that is demanding all of the administrative expertise and support that we can muster,” Gottschalk said. “Indeed, this is a time when we need more support centrally for the university, not less.”

Also related to the budget crisis facing the board, Gottschalk highlighted part of a statement by the first president of the UW System, John C. Weaver, who led the system upon its creation in 1971.

Gottschalk said the words had been uttered 27 years before in the very same room, and remained “eerily relevant” to the present day.

“Your university has never before feared change; it need not fear it now. Indeed, if it is to attain its rightful destiny – if it is, in fact, to validate its greatness – it must always be ready to meet the demands of change with well-considered change,” Gottschalk quoted.

“The people of Wisconsin have had great faith in public higher education,” Gottschalk continued from Weaver’s statement. “Above everything, I would covet the hope that through the difficult days of decision that lie immediately ahead, the citizens of Wisconsin will sustain that faith.”

In other budget-related business, the board passed a resolution Friday approving the 2003-04 budget allocation rules, which outline how the UW System will make necessary cuts among UW institutions.

The rules call for cuts to UW campuses, UW-Extension and administration based on each institution’s share of the UW’s base budget. Campuses will then recommend to the board the best ways to implement the allocated cuts.

Oliveri, chair of the Business and Finance Committee, reiterated the committee’s desire to review campus plans as early as possible to ensure that not all the same programs are slated for elimination at every campus.

“I don’t like the idea of across-the-board cuts,” Olivieri said. “We don’t have time now to re-evaluate cuts, but this should be part of a long-range plan. My expectation is that we will have a significant discussion about how to handle the second year.”

Regent Jesus Salas of Milwaukee agreed that across-the board cuts were not preferable, and said he wished the board had more time to focus how cuts would be made.

Chancellor David J. Markee of UW-Platteville reminded the board that the cuts at each campus will not be across-the board.

“Each of our cuts will be a little different based on our needs,” Markee said.

The board honored two research specialists from within the UW System on Friday for their “institutional loyalty, professionalism and devotion” with the 2003 Regents Academic Staff Award for Excellence. 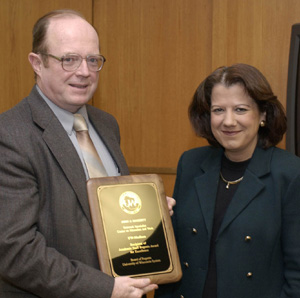 This year’s winners are John J. Gugerty, a researcher at UW-Madison’s Center on Education and Work; and Susan Foxwell, director of research services at UW-Stout.

Regent JoAnne Brandes of Milwaukee chaired the committee charged with selecting the winners. In presenting the award to Gugerty, Brandes conveyed the words of one of Gugerty’s nominators, who wrote: “The man lacks nothing but a cape.”

Gugerty co-directs several projects funded by federal grants, bringing more than $4 million to the UW System. He thanked the board and his administrators for the recognition. 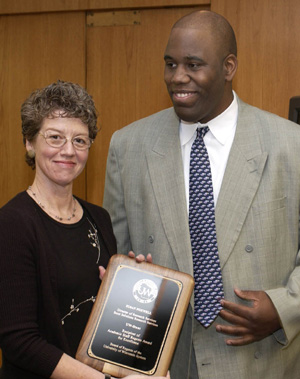 Regent Tommie L. Jones, Jr. of Oshkosh, who also served on the committee, presented the award to Foxwell, who was recently named director of research services at UW-Stout. Jones read the words of one nominator, who praised Foxwell for her “consistently high standards, positive interactions and innovative solutions.”

Foxwell thanked the board on behalf of all non-instructional academic staff in the UW System, who, she said, work everyday to bring the UW’s mission to life.

“This award gives us energy to move forward and do what we need to do,” Foxwell said.

The board presents the annual award in recognition of outstanding non-instructional staff members. Each winner receives a $5,000 award for professional development or to enhance a university program or function.

In her remarks to the board on Friday, UW System President Katharine C. Lyall relayed some history to help the board put the proposed $250 million in budget cuts in context.

Lyall told the board she recently learned that Andrew Carnegie sold the U.S. Steel Company to J. P. Morgan for $250 million in 1905. Carnegie used the money to construct more than 65 public libraries across the country. Many of those libraries still exist today and help millions of small town, rural, and inner city residents quench their thirst for knowledge, Lyall said.

“$250 million today doesn’t go quite as far, but it does represent the state investment in educational opportunities for more than 30,000 Wisconsin students attending a UW institution,” she said. “We know why the state is asking us to do this – but we should not lose sight of the cost. We should challenge ourselves and our state to commit to reinvest these dollars?as Carnegie did – for a future that can last a lifetime.”

President Lyall’s full remarks to the board

Board honors Barry for years of service

Regent Roger Axtell (right) congratulates Regent Jonathan Barry for his service to the Board of Regents. Barry is stepping down after 12 years on the board as the representative from the Wisconsin Technical College System board. (Jay Salvo)

The board thanked Regent Jonathan Barry of Mount Horeb for more than a decade of service with a light-hearted send-off on Friday as he ended his term.

Barry has represented the Wisconsin Technical College System Board as a member of the Board of Regents for 12 years. Another technical college board member will be appointed later to fill the seat on the board.

Regent Roger Axtell of Janesville presented a resolution of appreciation to Barry after a playful presentation, in which he relayed that UW System President Katharine C. Lyall has referred to Barry as the “institutional memory of the board.” He also thanked Barry for contributing his “intelligence, verbal skills and abilities” to the board.

Nancy Ives, UW System vice president for capital planning and budget, noted that Barry’s guidance of the Physical Planning and Funding committee was, in large part, the force behind securing significantly more state dollars for the university to maintain and renovate campus buildings.

Barry said his record shows that board members really can make a difference in how the university is governed, and he said he always wore his “tech college hat” while on the board.

“The tech college is inextricably woven with the University of Wisconsin,” Barry said. “The richness that we have in Wisconsin?we should never back off of it.”

The board also passed a resolution on Friday in support of the many UW System faculty, staff and students who were called to active or reserve duty in support of military action in Iraq and the Middle East.

The resolution recognizes the great personal sacrifices these members of the military and reaffirms the board’s commitment to easing their transition upon returning home.

In other action Friday, the regents:

The Board of Regents will meet again May 8 and 9 on the UW-Stevens Point campus.