Regents urged to stay vigilant in a financially unsure time

The Regents began their second day with a report from Regent President Mark Bradley, in which he reflected on items about higher education and the economy from Gov. Doyle’s State of the State address. Calling the current climate in Wisconsin “financially unsure,” Bradley urged the Regents to remain active and vigilant in the days ahead.

“It’s going to be critical that we continue our dialogue with elected officials,” said Bradley. “Keep stressing that we are part of the solution to the problems that the state is facing.”

Bradley pointed to the growing support of the Growth Agenda for Wisconsin and specific action steps that have grown out of the Advantage Wisconsin strategic planning process.

Reilly reminded the Regents about ongoing national searches for new chancellors at UW-Madison, UW-Parkside and UW-Whitewater. Once these key leadership positions are filled, Reilly will have hired eight new chancellors since becoming president in 2004.

“This startling fact makes its own case that we must have the tools we need to compete,” said Reilly, stressing that the UW System must work to attract qualified academic leaders in a very competitive marketplace. 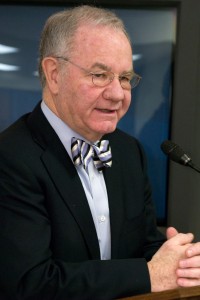 “He fought hard for financial aid, reminded us of our commitment to diversity, and charged us to execute on those promises.”

Regent David Walsh emphasized Salas’ lasting mark on the Board.

“[He] reminded us of our responsibility to serve all the state of Wisconsin, and to open up access to this system for everyone,” said Walsh. “He fought hard for financial aid, reminded us of our commitment to diversity, and charged us to execute on those promises.” 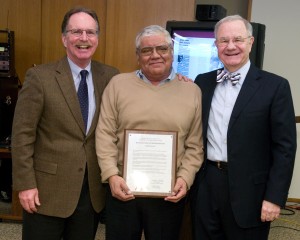 An activist nearly his entire life, Salas was and is passionately engaged in Latino and Chicano rights, even participating in a march from Milwaukee to the state capitol in Madison with the late activist Father James Groppi. Salas’ protests were integral to improving conditions for migrant workers and the Latino community, including the creation of a Spanish-speaking institute at UW-Milwaukee.

In 1987, Salas took a teaching position at Milwaukee Area Technical College, and just recently retired from that post.

“[Salas is] a friend, colleague, and an inspiration to us all,” said Walsh, who presented Salas with a donation that would double the annual amount of the Jesus Salas Academic Activists Scholarship.

The visibly moved Salas thanked the Board for their continued efforts, calling his service on the board “an extraordinary time.”

UW-Whitewater Warhawks embody what it means to be student athletes 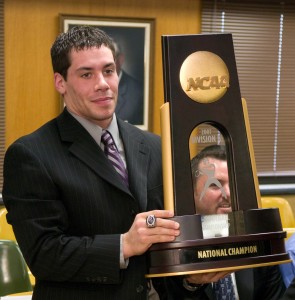 UW-Whitewater Interim Chancellor Dick Telfer introduced his NCAA Division III Football National Champions to thunderous applause by the Regent assemblage and showed off the team championship trophy, as well as the 80-pound Gagliardi Trophy awarded to player Justin Beaver. Beaver earned the title of WIAC Player of the Year and Scholar Athlete of the Year while also being named the NCAA Division III National Player of the Year. Illustrating his dedication to academics, Beaver was absent from today’s ceremony so that he could attend class.

Although the trophies were a point of pride for Telfer, he emphasized his continued pride in the fact that the champion seniors in attendance today also embody model student leadership off the field. 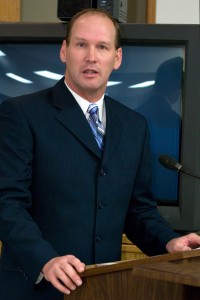 “We have scholar athletes,” said Telfer. “[That’s] one thing we do pride ourselves on, is our athletes being students.”

Coach Lance Leipold stressed the team’s work ethic and maturity, pointing to important real-world experiences his players faced and continue to face on and off the field.

“For these seniors to take these experiences, along with what they’ve had on the athletic field, with them as they finish their degree is truly a way to put frosting on the cake,” said Leipold.

When pressed by both Reilly and others in attendance for a forecast of a second championship, Leipold was confident in his up-and-coming players.

“We have the underclassmen working hard in the weight room and in the classroom,” said Leipold.

Taking up resolutions passed by the Board’s Business, Finance, and Audit Committee yesterday, the Regents sought to bring executive salary ranges in line with compensation levels at peer universities.
Using objective salary data from comparable universities in other states, the Board’s policy is to set the midpoint for UW System chancellor salary ranges at five percent below the median of peer salaries. The range is then set at 10 percent above and below that new midpoint. Unlike salary ranges for UW System faculty and academic staff, these ranges had not been adjusted since 2006.
The full Board unanimously voted to adopt new salary ranges for the UW-Madison chancellor, the chancellors at the comprehensive campuses, and for the UW System president. The new salary ranges will be effective July1, 2008, so none of the executive salaries changed as a result of this Board action today.
After hearing reports from the Business, Finance and Audit Committee, the Physical Planning and Funding Committee, and the Education Committee, Regents adopted other resolutions including:

The UW System Board of Regents will hold its next meeting on Thursday, Mar. 6, on the UW-Madison.