MADISON – The University of Wisconsin System Board of Regents honored the second annual winners of its Regents Diversity Awards at its meeting on Friday. The award program was established to recognize and support efforts to foster access and success in university life for historically underrepresented populations.

Regent José Vásquez, who chaired the selection committee, noted that the award recipients may have different approaches to their diversity work, but their efforts share some common characteristics. “In their work, you will find a genuine respect for human differences, a deep attentiveness to the learning process, and a keen responsiveness to students and their educational needs,” he said. 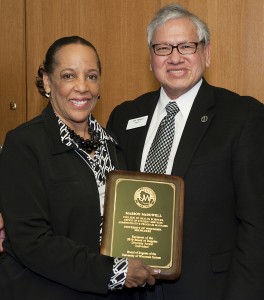 In introducing UW-Milwaukee’s Marion McDowell, winner in the individual category, Vásquez pointed out that she has been an advocate and educational champion for underrepresented students for more than 30 years. McDowell is the administrative program manager for UW-Milwaukee’s College of Health Sciences, where she has helped to recruit and retain a growing number of students from minority and disadvantaged groups to the health care field.

McDowell said the award “personifies not only the true meaning of my job but my life’s work.” She noted that program graduates are now employed all over the world in health- and non-healthcare professions. “This is the testimony that we must provide quality support services to underrepresented students… It is imperative that the UW System continues to articulate a compelling case for diversity and the importance of addressing issues that not only face our students but our faculty, staff, and the community as well,” McDowell said.

The Multicultural Awareness Program (MAP) Facilitation Team, from UW-Extension and UW Colleges, received the Regents Diversity Award in the team category.  As Regent Danae Davis explained to the Board, the team has focused on transforming the two institutions by facilitating a deeper understanding of cultural issues on multiple levels. To date, more than 900 faculty and staff members from both institutions have voluntarily participated in the offered two-day workshops.

“The broad reach and scope of the program speaks to both the effectiveness of the MAP model and the institutions’ commitment to transformative change,” Davis said.

Demetrius Brown, a 4-H and Youth Development faculty member, accepted the award on behalf of the team. “It’s important for us to learn from our own cultural experiences and be open to share those experiences with others, and look at some of our privileges as well as our absence of privilege. This has been a great opportunity to learn from my colleagues as well as teach,” Brown said.

Susan Fey, a video design manager for Wisconsin Public Television, added, “Many people who have gone through this training have described it as life-changing. It’s evidence of your critical investment in making our institutions the best that they can be.”

Regent Aaron Wingad presented the Diversity Award in the institutional category to the Summer Business Institute at UW-Whitewater. The week-long summer program is intended to improve retention of targeted students of color in business majors by familiarizing these students with the business faculty, business career prospects, and campus life.

“What is unique about this program really is the broad collaboration across campus that went into it,” Wingad said. After identifying equity gaps through the UW System’s Equity Scorecard data, faculty, advisors, staff, students, the business sector and community worked together to fashion a comprehensive program to strengthen students’ skills for academic success, build relationships with faculty, and address campus climate issues.

In accepting the award, Freda Briscoe, Director of the UW-Whitewater’s Minority Business Program, said the Summer Business Institute’s combination of exposure and foundational support has been transformational. “It is transforming the hearts and minds of administrators, faculty, and staff, and the way they perceive their roles in the success of students of color in the college,” she said. “This award is significant to the college because it indicates that our diversity and inclusive excellence initiatives are on the right track.”

After considerable discussion, the Regents voted 14-2 to approve UW-Eau Claire’s expanded undergraduate differential tuition program known as the Blugold Commitment. The approval came with a requirement that the campus present a more detailed plan for the initiative’s expenditures in May.

The Blugold Commitment will add $300 to the institution’s undergraduate resident tuition in each of the next four years, ultimately resulting in a $1,200 annual increase. Additional revenues will help the campus improve its faculty-student ratio, improve graduation rates, and enrich other educational programs for students.

Regent Tom Loftus urged the Board to defer consideration of the Blugold Commitment to a later meeting to allow UW-Eau Claire the opportunity to build more student consensus around the initiative. Student Regent Kevin Opgenorth expressed a similar concern, saying the initiative might create a divisive environment on the campus.

Regent Vásquez countered, saying that extensive discussions of the topic have already taken place at UW-Eau Claire, indicating that the concerns of students, faculty and others were given due consideration. “I think we have to respect that…and that process has happened,” he said.

UW-Eau Claire Chancellor Brian Levin-Stankevich explained that delays in approving the Blugold Commitment would affect financial aid planning, and notices that must be sent to families in April, and could also delay implementation of the initiative.

Regent John Drew expressed support for they plan and urged quicker action, saying that full consensus was unlikely. “Delaying (this decision) only keeps the pain going,” he said.

Regent Vice-President Michael Spector noted that the Board has heard very good presentations on all sides. “I think we should decide now what’s best for the school and the state, and give predictability to parents and students.”

In registering support of the initiative, Regent Aaron Wingad, a UW-Eau Claire student, said, “This issue strikes home with me. If this passes, it will affect the bill I get as a student and augment my student debt …In the end, I feel that the student body’s elected leaders went through an extensive process that ultimately took into consideration the opinion of the student body and made a tough, close decision to approve the Blugold Commitment.”

Wingad added that the amended provision required the university to provide more detail on how new revenues would be spent, allowing students to better understand how their tuition dollars will be used. 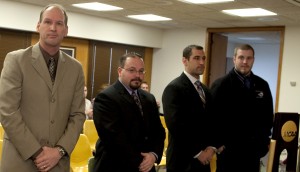 Regent President Chuck Pruitt said the team offers a reminder of the special place Division III holds. “These guys didn’t go to UW-Whitewater with guaranteed full rides and entourages of sports agents following their every move. They are, in the best sense of the word, student athletes,” Pruitt said.

Head coach Lance Leipold told Regents that involvement with Whitewater football has presented rewards greater than a 15-0 season. “What we like to do on a Saturday, of course, is come out on the winning end of the scoreboard, but I know our true mission is still developing these young men as students and future leaders. I think we’re doing that at UW-Whitewater,” he said.

Team co-captain Paul Wick, who graduated in December, thanked the Regents “on behalf of the UW-Whitewater football team and students across the state for the way you help to support us and give us these opportunities every day to succeed academically and athletically.”

The Board then went into closed session.

The UW System Board of Regents will hold its next meeting April 8-9, at UW-Fond du Lac