MADISON – The University of Wisconsin System Board of Regents honored the winners of the fourth annual Regents Diversity Awards on Friday. The awards program was established to recognize and support the outstanding contributions to diversity and inclusion by people and programs at UW institutions.

Regent Judy Crain, Green Bay, who chaired the selection committee, told the Board that while the awards are relatively new, the ideals of diversity and inclusion have been promoted in the UW System for more than 20 years.

“These efforts are vitally important, not only because of the principles of justice and genuine opportunity for all, but because of the educational, social and economic value to this university, to the state of Wisconsin, and beyond,” Crain said.

She said that while the backgrounds and strategies of the award-recipients differ, they also share some important qualities. “Each shows a genuine respect for the human differences among us, a deep attentiveness and understanding of the learning process, and a keen responsiveness to students and their educational needs. Our pride is real as we recognize these accomplishments,” Crain said.
Awards were presented in three categories. 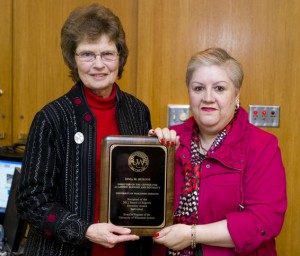 Irma Burgos, Director of the Center for Academic Support and Diversity at UW-Oshkosh, received the individual award. In presenting her with the award, Regent Crain noted that Burgos has been committed to the educational success of students of color at UW-Oshkosh for more than 20 years. The Multicultural Retention Programs Tracker that Burgos developed is, in effect, an early warning system, Crain said. “It pinpoints students who are apt to fail, and it pinpoints them before that happens, and then helps to connect them with resources and people to turn things around.”

Burgos said she was “excited, humbled, and deeply moved” to receive the recognition. “Every one of us involved in working with a diversified student population carries with us the passion, determination and, yes, courage to see that our students receive the best education possible,” she said. She added that there is a shared recognition among her colleagues that a “blanket treatment of students, a one-size-fits-all approach, is not in their vocabulary. Our students are treated as the beautiful individuals that they are.” She said she also accepted the award as a tribute to the System’s pursuit of diversity, equity and inclusivity.

Regent Chuck Pruitt presented the Team award to the UW-Eau Claire Honors Program. To address an honors population that previously was about 98% white, an innovative holistic admission pilot project was introduced that takes into account other factors such as service and extra-curricular activities in addition to academic performance and potential.  In 2010, the year after the program was revamped, representation of students of color in the UW-Eau Claire Honors Program had increased from 1.7% to 9.6% Pruitt told the Board. 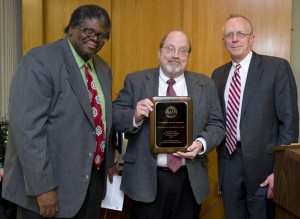 “One of the canards of which there are too many in our society is the assertion that the pursuit of diversity is at odds with the pursuit of excellence, that somehow, if we see a more diverse and representative community on our campuses or in our businesses, we will somehow do so at the expense of high standards and high achievement. Everyone in this room knows that it is simply not true. Diversity enriches us all, and we can never achieve true institutional excellence without diversity, equity, and inclusion,” Pruitt said.

Director Jeff Vahlbusch and Faculty Fellow David Jones accepted the award on behalf of the UW-Eau Claire Honors Program. Vahlbusch said two things made this “revolutionary process” possible: the UW System’s adoption of the Equity Scorecard and “unwavering strong support” from UW-Eau Claire leadership. “Simply put, the Equity Scorecard gave us the goals to meet and a series of numbers to beat, and we’re well on our way to doing just that,” Vahlbusch said.

Jones added that questioning decades-old benchmarks regarding academic achievement opened the door to considering other markers of top academic potential. “If you learned English after early childhood and have a 23 ACT in reading but a 31 in science, should you be disqualified from Honors admissions?” he asked.

Regent Ed Manydeeds presented the Institution/Unit Award to UW-Green Bay’s First Nations Studies Program. The program, which is part of the Professional Program in Education, is an interdisciplinary degree program that is committed to the study of American Indian culture, philosophy, history and language, as well as the social, economic, and political status of indigenous people and their communities. What sets the program apart, Manydeeds said, is that “it embraces the oral traditions of the American Indian tribal communities, and incorporates the teaching and learning approaches of tribal people, offering students a new way to learn.” 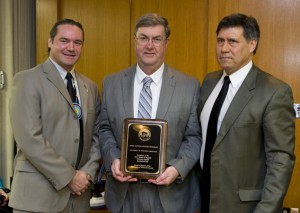 The program also addresses the need to reach out to more Native American students, he said. Manydeeds noted that while reading the nominating materials for the First Nations Studies program, he came across some statistics that shocked him. “According to our System study, of 1,000 Native American students that graduate from high school, only 40 take the ACT test and apply to a campus. Of those 40, 34 are admitted. Of those 34 admitted, only 22 enroll. Of those 22 who enroll, only 16 are retained to the second year. Of those 16, only 8 graduate.”

“This is a problem we must address,” Manydeeds said.

Following on the recommendation of the Ad Hoc Committee on Board Roles and Responsibilities, chaired by Regent Mark Bradley, the Regents unanimously voted Friday to approve the creation of a new Board committee: the Research, Economic Development, and Innovation (REDI) Committee.

The goals of this new committee, Bradley said, will be “to elevate the knowledge economy as a priority topic for the Board.” He added that such a committee would signal the Board’s recognition of the importance of the System’s scientific, research, and technical work in moving the state forward, and would also highlight for state and local leaders the role and potential of UW System institutions in addressing the state’s economic development challenges.

UW System President Kevin P. Reilly told the Board that the new REDI committee aligns with the System’s intention to have someone in System Administration responsible for the economic development portfolio. He added that the new position would be funded in half by the state’s Wisconsin Economic Development Corporation, and recruitment to fill that position would begin shortly.

As part of his regular report on news from around the UW System, President Reilly told Regents that a new report pdf  from the Office of Policy Analysis and Research indicates that the number of students transferring into or within the UW System in 2010-11 reached 17,209.  He noted that almost one-third of new degree-seeking undergraduates were transfer students. “We continue to work on making transfer a smoother, more efficient process for our students. There is work yet to be done. At the same time, we can all be proud – the Board of Regents, the System Administration, and the institutions – of the major improvements we have made in transfer policy and practice in recent years,” Reilly said.

The UW System Board of Regents will hold its next meeting September 8, 2011, in Madison