MADISON, Wis.—The University of Wisconsin System Board of Regents honored the recipients of the 12th annual Regents’ Diversity Awards today. These awards recognize individuals and programs that foster access and success for students who are members of historically underrepresented populations.

“These outstanding people and programs are making a profound impact on their campus communities, increasing opportunity for all student populations,” said Regent Eve Hall, who chaired the special Regents’ committee to determine the recipients. “We are proud to recognize their exceptional dedication to building partnerships that support student success.” 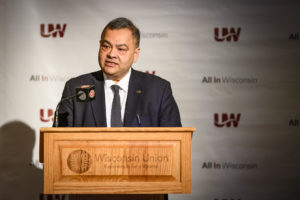 In accepting the award, Sen saluted the many individuals and programs at UWM “who seek out young, hesitant undergrads and patiently nurture them into incredible scholars.” He added that consistent support for underrepresented minority students from the time they enter UWM until they leave has made measurable success in closing the achievement gap.

“Being assured of constant support to do research goes a long ways toward an ability to learn from mistakes and eventually succeed,“ Sen said.

With the help of his students, community partners, and a multidisciplinary set of colleagues, Sen has found that engaged-research and problems-based learning can promote diversity, inclusion, and positive institutional change.

The Fostering Success program, the first of its kind in the UW System, supports college students who were former foster youth, a population that is often underserved and faces additional barriers to college education. National statistics report that although 80 percent of foster youth have goals of attending college, only 20 percent enroll and only 3 percent graduate from a four-year institution.

“The number of (foster) students is ever increasing and the need for support is imperative,” said Angela Ruppe, Director of Student Support Services, accepting the award. She noted that foster children are more likely to wind up homeless, incarcerated or dead than their peers. “We’re working to improve those outcomes,” Ruppe said.

“Our goal is for our graduates to be broadly representative of the population as a whole,” said Judith Burstyn, chair of the Chemistry Department, in accepting the award. She noted the shared “personal commitment to increasing educational opportunity in this field” among department members.

The Department of Chemistry, which graduates about 50 Ph.D. and 10 M.S. chemists each year, is enhancing recruitment and retention of underrepresented minority and first-generation students through a variety of complementary initiatives, such as the Research Experiences for Undergraduates, Chemistry Opportunities (or CHOPS), and the Catalyst program, which are designed to increase representation within its large graduate program.

The success of these initiatives led directly to the Department of Chemistry landing support through the American Chemical Society for the first Chemistry Bridge to the Doctorate program. 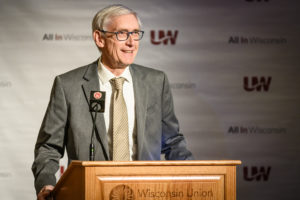 Regents presented a resolution of appreciation to Governor Tony Evers, recognizing his nearly 10 years of service on the Board during his tenure as Superintendent of Wisconsin’s Department of Public Instruction.

Governor Evers said the Wisconsin Idea is “part and parcel of what Wisconsin is all about.” To address the challenges the state faces, the UW System can play a critical role through its education and research endeavors. Problems like the dairy crisis, rural economic development, changes in manufacturing and more are “part of your work,” Evers said. “We need your consistent and ongoing help to solve these problems.”

As part of fulfilling the Wisconsin Idea, Gov. Evers encouraged the UW System to be proactive in helping expand understanding of how important diversity is to the future of the state. “I am encouraging the UW System to take the lead on this. It’s tough work,” Evers said. “When we talk about diversity, a lot of it is inside. It’s not going to be changed by policies and procedures; it’s changing how people think.”

In the search for a new UW System President, “great progress” has been made, according to Regent Vice President Michael Grebe, chair of search committee. “We now have a finalized President’s position prospectus that describes the responsibilities of the UW System and the qualities we are seeking in prospective candidates,” Grebe said. Storbeck Search & Associates is now proceeding with identifying and recruiting a pool of candidates.

The deadline for receipt of applications is March 15, with interviews to occur during April and May, with the naming of a new president likely in late spring.

Grebe expressed his “gratitude and appreciation to the many people and constituencies who have taken the time to share their thoughts and views about this search, whether through stakeholder listening sessions, through comments submitted on the presidential search website, or directly to me or other committee members.”

Responding to the recent decision by Regent Gerald Whitburn to step down from the Board, Petersen thanked Whitburn for his near decade-long service. “Regent Whitburn’s commitment to his role as Regent was extraordinary, and his passion and experience will be missed by those who served with him,” Petersen said. “Regent Whitburn is a public servant who always advocated for Wisconsin students and the integrity of public education.”

Petersen also reported that UW System’s All In Wisconsin tour is set to resume next week with its 10th university, a visit to UW-Milwaukee. The tour will visit the remaining three campuses in coming months.

Finally, Petersen reminded Regents of the UW System’s 17th annual Research in the Rotunda event on March 11 in the Capitol.  The event highlights the research achievements of undergraduates from every UW institution. 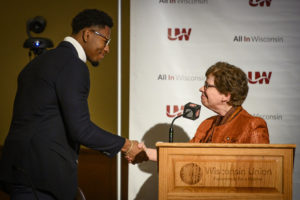 UW System President Ray Cross featured UW-Madison senior Kevin Crosby of Maryland in his Student Spotlight. Crosby, who will earn a degree in Nutritional Sciences with a certificate in Environmental Studies this May, came to UW-Madison as a member of the Posse Program from the Washington, D.C. area.

“The opportunities I’ve been able to pursue at UW have enriched me more than I could have imagined,” Crosby said.

He noted that when people hear he’s attending the UW-Madison, he’s often asked what position he plays, reflecting what Crosby described as “people’s inability to see black achievement beyond entertainment or athletics.” He said his experiences at Madison have helped to prepare him to influence the next generation of leaders. 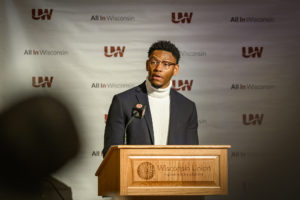 Crosby addresses the Board of Regents

“We are also pleased that Gov. Evers and the Legislature have announced several initiatives focused on rural and dairy issues,” Cross said.

On the federal front, the UW System’s Federal Agenda is currently being updated. The Federal Agenda annually identifies and defines the System’s federal priorities, both as individual institutions and as a system. It will be presented to Wisconsin’s congressional delegation in March.

Cross also reported the UW System Office of Compliance and Integrity, in collaboration with key stakeholders around the UW System, is developing a response to new regulations on how institutions respond to concerns of sexual misconduct being proposed by the U.S. Department of Education.

UW System is continuing to engage more closely with Wisconsin’s tribes, Cross said. He noted previous meetings with the Potawatomi, Lac du Flambeau, and Menominee tribes and upcoming meetings with the Bad River and Mole Lake Bands of the Lake Superior Chippewa. UW System also plans to attend the State of the Tribes speech at the Capitol on Feb. 18.

Cross also provided an update on UW System’s ongoing response to the global health emergency resulting from the Coronavirus. He said the System and its institutions are working to monitor reports and recommendations from the Center for Disease Control, the State’s Department of Health Services, and local health departments.

Finally, from his News Around the System report, Regents heard that over the past five years, a UW-La Crosse Hate/Bias Response Symposium, led by the university’s Campus Climate unit, has grown and become a unique resource for prevention, response, and healing far beyond the campus community. This year, diversity officers, LGBTQ+ directors, counselors, students, and others from 11 states and dozens of schools and organizations came together at the symposium to learn how to make their communities safer, more inclusive, and just. 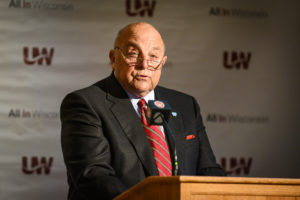 It was reported that UW experienced another successful season in 2018-19. Of the UW’s 23 sports, 17 advanced to postseason competition. Headlining the year was a fifth national championship for women’s hockey, and the fifth consecutive bowl win for football – a Big Ten record.

Individually, UW had an unprecedented number of standout performances. Women’s soccer student-athlete Rose Lavelle was a standout member of Team USA, the 2018 World Cup champions; Beata Nelson was named National Swimmer of the Year; Alicia Monson was a national champion in track; and Morgan McDonald won national championships across three sports (cross country, indoor track, and outdoor track). In all, UW boasted 37 All-Americans on its way to a 16thplace finish in the Learfield Directors’ Cup – equaling UW’s highest finish in the last 25 years.

He highlighted some of the programs featured in the past year, including “Portraits of Rural Wisconsin,” “Beyond the Ballot,” and “Wisconsin Hometown Stories.

Purcell told Regents that Wisconsin Public Media is widely considered a source of trusted journalism and expects to offer key coverage of upcoming elections. He said training young journalists is also central to their mission.

“WPM is a place for telling Wisconsin stories so everyone can share them,” Purcell said.

The Board of Regents is the licensee of 15 FCC non-commercial broadcasting licenses across the state.

The next University of Wisconsin System Board of Regents meeting will be April 2-3, 2020, in Madison.