MADISON – The University of Wisconsin System Board of Regents met for a one-day meeting on Nov. 6, with most of the session focusing on broad discussions about two strategic issues – academic workforce recruitment and retention challenges, and professional doctorates in the UW System. No action was taken on either item.

Regents President Mark Bradley opened the meeting by recognizing the changes at the State Capitol as a result of the recent elections. Emphasizing the success of regular meetings and conversations with past legislative leaders, he told the Board he’d like to set up a “series of meetings where we could periodically come to the Capitol, sit down, and talk about issues confronting the State of Wisconsin where higher education can play a role.”

“Our nation’s economy is in serious trouble,” Reilly said. “As we move forward in leading the UW System, we must be cognizant of this situation, sensitive to the shifting paradigms, and committed to doing all we can to contribute vigorously to long-term economic solutions. In these tough economic times, elected officials and university leaders must work together to find viable solutions.”

Reilly encouraged his UW System colleagues to remain focused on long-term goals outlined in the Growth Agenda for Wisconsin – an effort to strengthen the state’s economic foundation.

“In an era of scarce resources, our ability to maintain forward progress and achieve these goals will, no doubt, be tested — our progress will no doubt be slower,” Reilly said. “But we must remain focused on the needs of people who rely upon our institutions of higher education even more in these challenging times.”

“Graying” of academic workforce will affect recruitment and retention

An aging academic workforce is expected to exacerbate the already competitive climate in which UW System institutions work to recruit and retain their high quality faculty and staff, the Regents were told Thursday.

In 2007-08, more than 2,400 faculty members across the UW System – or just over one in three – were age 55 and older. That’s up from one in four 20 years ago. As the number of retirements rises, many experts are predicting that the number of new academic professionals entering the workplace will not keep pace, which could potentially set the stage for a national “bidding war” among institutions of higher education seeking to attract the best and brightest.

“In such an environment, there will be a growing intensity in the need for competitive pay and benefit packages, including domestic partner benefits, to attract and retain quality faculty and staff,” Reilly said. “These are challenges we already face, but we have to be aware that the situation is going to become even more acute with the anticipated rise in retirements.”

The impact of the “graying” academic workforce on UW’s competitiveness relative to peers is another factor to be considered in UW’s annual pay plan review, which the Board will address at its December meeting.

Chris Sadler, a professor and Faculty Senate Chair at UW-Stevens Point, told the Board that non-competitive salaries have resulted in repeated failed searches and concerns about the quality of applicants, which ultimately could affect educational quality. “Campus after campus, department after department, you hear the same story,” Sadler said. “I don’t think we’re hiring first-round draft picks. I don’t think they’re even applying to the UW System. We’re digging very deep into the applicant pool and that’s a humongous concern.”

“We all know that students view their higher education experience in a broader sense, not just in the classroom,” Dahlvang said. “They evaluate student life, residence life, student services, and the general climate of the institution. That’s where academic staff come in.”

Regent Colleene Thomas said the Board’s discussion reinforces things she’s heard on campuses. “Morale is not good now because of all the trimming around the edges to maintain core services,” she said. “The people who are employed at our institutions could work at a lot of different places…It’s crucial that we make this a workplace that’s attractive if we’re to be able to retain people.”

Regent David Walsh pointed out, however, that continuing to tell the legislature about how UW faculty and staff are underpaid “doesn’t sell any more. The ears aren’t there for that.”

Nobody disputes that faculty and staff salaries are not at the level they should be, Walsh said. But that fact is running up against another harsh reality now, the challenging economic situation. “When you put those two realities together, we can’t keep going to the well with the same statistics,” he said. “It’s time we started to reframe the message.”

Reilly reminded the Board that many factors play into recruiting and holding onto the best talent, including operating budgets that fully fund teaching, research, and outreach programs; capital funding, both public and private, to build state-of-the-art laboratories and academic facilities; as well as continued high quality student populations and the overall academic reputation of the UW institutions.

“Compensation is a wider issue than salary,” Reilly said. “We need to do more analysis of where we can find some flexibility that will allow us to enrich overall compensation packages.”

Regent Kevin Opgenorth urged the Board to continue its search for a salary solution that wouldn’t involve students footing more of the bill by raising tuition. “I hope we can keep that at a minimum,” he said.

Reilly summed up: “In an era of scarce resources, our ability to maintain our forward progress and achieve these goals will, no doubt, be tested, but we must remain focused on the needs of people who rely upon our institutions of higher education even more in these challenging times.”

Reilly also reminded the Board that it is obligated to submit a recommendation for the 2009-11 pay plan, and that issue will be addressed at the December Board meeting.

Professional doctorates in the UW System

The Regents also held a discussion on the future of professional doctorates in the UW System.

Rebecca Martin, Senior Vice President for Academic Affairs, told the Board that the interest in professional doctorates – terminal degrees that emphasize applied learning, versus research – is growing throughout the country, and more and more comprehensive institutions are seeking to expand their traditional degree-granting authority in order to offer doctoral degrees.

Several disciplines, primarily in applied health professions, have reassessed the requirements for their degrees and determined that the field and necessary competencies had changed so significantly that the disciplinary professional organizations are recommending that degree
levels be increased.

Within the last three years, the Board has authorized the implementation of three professional practice doctorates in health-related fields – two as collaborations between two UW institutions, and one as a free-standing program at a doctoral campus.

“It has been our practice to limit doctoral degrees to the doctoral cluster,” Martin said. “While it doesn’t appear any statutory changes would be required (to do otherwise), it would require that we shift the way we think about what this means.”

“For those areas where there’s the expertise already available, I don’t see any reason we should handicap them from going there,” said UW-Madison Provost Pat Farrell. “I would have more concern if they were going into completely new areas that could involve expertise that’s not already present.”

“We wouldn’t be pushing this forward if we didn’t think there was a huge need,” UW-Oshkosh Chancellor Rick Wells said.

View presentation on Professional Doctorates in the UW System pdf 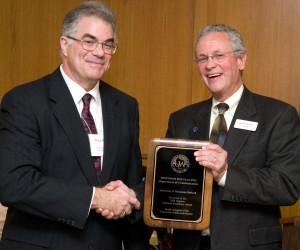 The Board honored two professors and one academic department with the presentation of the Regents’ 16th annual Teaching Excellence Awards. It is the highest recognition bestowed on members of UW System’s faculty and academic staff for outstanding career achievement in teaching. 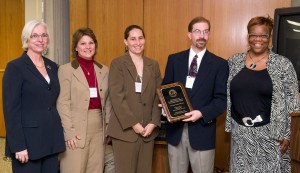 Regent Danae Davis, Professor Chris Bendel, and his colleagues in the Department of Mathematics, Statistics and Computer Science at UW-Stout

Regent Danae Davis, who chaired the selection committee, said the winners had clearly impacted the lives of their students. “While these dedicated professors developed different techniques to create effective teaching skills and to foster learning, they all demonstrated a remarkable sensitivity to needs of their students and a commitment to high standards,” Davis said.

The first to receive an award was Professor Heil, who teaches film production and narrative scriptwriting. Benefiting from his enthusiastic teaching, close attention to detail and dedicated mentorship, many of Heil’s students have gone on to successful careers in a highly competitive field. 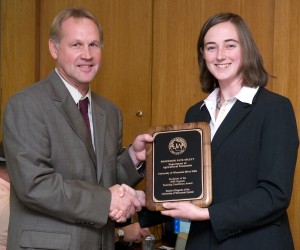 Regent Jeffrey Bartell introduced Heil, saluting the professor’s ability to “unlock the potential” in his students. “He can be counted on for sound counsel and advice long beyond graduation date,” Bartell said.

In accepting his award, Heil said teaching “entails problem-solving, strategic planning, and unfettered creativity. Best of all, it is a profession through which fulfillment is tied to helping others.” He added that his experience has taught him the crucial role of providing feedback to students that balances encouragement and challenge, and the long-term need for students to develop skills that will serve them well regardless of their ultimate careers.

Regent Colleene Thomas introduced Professor Splett, saying that he has “demonstrated to his peers, his students, and the public that good teaching motivates a spirit of inquiry and inspires a level of confidence in students.”

“I admire our students as they begin to write their own stories as thinkers, reflectors, wonderers, and worriers about the future world, and I have the privilege to be their teacher,” Splett said. “And when they graduate, they become the caretakers and shapers of our humanity, our land and our ideals.”

Splett thanked the Regents for keeping teaching as a centerpiece of the System’s mission.

Professor Chris Bendel accepted the departmental Teaching Excellence Award on behalf of UW-Stout’s Department of Mathematics, Statistics and Computer Science.  Regent Davis saluted its members’ ability to “inspire the spirit of innovation in our students by demonstrating innovation themselves.”

“The students who have written to us about this team of professors have described in the warmest terms how it felt for them to have teachers and mentors that attended to their needs, helped them, and cheer them on,” Davis said.

In accepting the award, Bendel said that the success of the department is due not only to the individual excellence of its members but also to “the strong spirit of collaboration within the department.”

The committee then met briefly in closed session.

The UW System Board of Regents will hold its next meeting December 4-5, on the UW-La Crosse campus.