MADISON – The Board of Regents voted today to approve a biennial budget proposal presented by the University of Wisconsin System that targets affordability, talent development, and return on investment for the people of Wisconsin.

The UW System request calls for an investment of $107.5 million in state funds, including $82.5 million in outcomes-based funding to support university and statutorily required goals related to student success, workforce development, and operational efficiencies, and $25 million to address capacity-building initiatives, primarily for STEM and high-demand fields.

“I think it’s a very good budget,” said Regent Ryan Ring, a senior at UW-Eau Claire. “In coming years, students will feel the impact of it, and it will be very positive.”

As part of the biennial budget request, the Board of Regents also approved UW System’s 2019-21 capital budget recommendations, which largely focus on renovation, repair and replacement of aging or obsolete facilities. More than 60% of the UW System’s 62 million square-foot building inventory was constructed between 1950 and 1979, and much of that inventory has had little renovation or upgrade since its inception.

UW System’s capital request seeks project authority in 2019-21 and into 2021-23 for five projects. Within the 2019-21 portion of this request are six academic facilities and five utility/central plant projects that would be funded with $463.9 million in bonding to renovate, expand and replace obsolete facilities.  Another 10 projects to be funded with $506.4 million are financed exclusively through UW program revenue, both borrowing and cash. These projects, funded entirely by UW System institutions, include a new residence hall and renovation of existing residential halls, recreational and athletic facilities, and a student union, to replace outdated facilities and accommodate growing student demand.

The request includes $446.5 million in bonding for the five advance enumeration projects, requested now for 2021-23, and focused on science, engineering and priority academic programs.

The UW System’s FY 2019-2021 biennial budget request must be submitted to the state’s Department of Administration in September for consideration as part of the Governor’s executive budget, which is typically released in February. 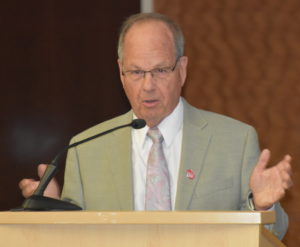 The System generates or supports 167,000 jobs, produces $1.1 billion in local and state taxes, and $23 dollars in economic activity for every $1 dollar invested, the study shows. It also reveals that 75 percent of the economic impact directly affects the private sector and that the System produces $9.3 billion in labor income.

Regents also heard from Chancellors Debbie Ford of UW-Parkside and Dean Van Galen of UW-River Falls, as well as Regents Drew Petersen and Ryan Ring on the Guardian Initiative, a national effort to rebuild the public’s trust in higher education and to promote higher education’s value. That effort, led by the Association of Governing Boards, mirrors actions already underway in Wisconsin, and numerous Regents pledged to be active in the effort.

“Higher education transforms lives, and changes the trajectory of lives,” said Chancellor Van Galen. “It is worthy of support and our collective advocacy.”

“We know, both nationally and in the UW System, college graduates earn more over a lifetime, tend to be more engaged in their communities as volunteers and leaders, and use the learning experiences in their degree programs to adapt and to lead in this world of accelerating change,” said Chancellor Ford. 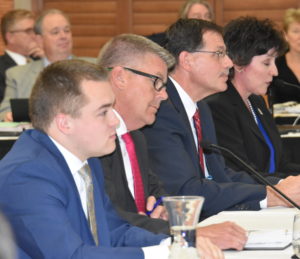 Regent Petersen issued a “clarion call to action” to fellow Regents to support the Guardians Initiative and to dispel public skepticism about the value of higher education.

“For us to fulfill our statutory responsibilities we need the business community, our elected officials, and the public to see the value in higher education and to see the investment the State makes in the UW System as worthwhile and wholly impactful,” he said.

He encouraged board members to meet with local officials and civic organizations, attend campus events, and generally increase their local visibility.

Regent Ryan Ring, a UW-Eau Claire senior, also encouraged Regents to meet with students and faculty. He noted even “demonstrating to the campus leadership that the Board is engaged and supportive is enough.”

“This is timely and this is important,” said Regent Regina Millner. She also noted that Regents’ public advocacy for the System “humanizes what this institution is all about and it humanizes the governing board of this institution.”

Regent Bryan Steil said Regents can dispel misperceptions about college costs while also listening to Wisconsin residents who don’t have a role on a college campus. 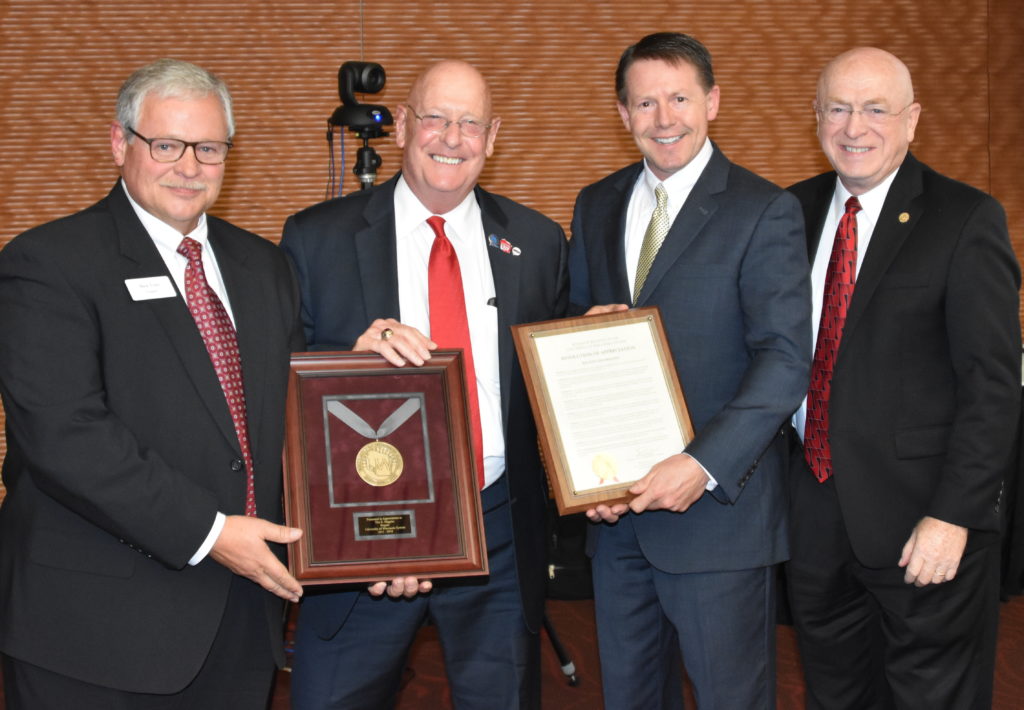 Regent Emeritus Higgins (2nd from left) is recognizaed with a resolution of appreciation for his service. Also picture (from left): Regent Tyler, Regent President Behling, and UW System President Cross

Regents recognized the service of Regent Emeritus Tim Higgins, whose seven-year team ended this past spring.

Higgins told Regents that he had wanted to serve on the board ever since he was an undergraduate at UW-Madison.

“We all want to leave a mark, like carving our initials on a mighty tree,” Higgins said.

Carleen Vande Zande, Associate Vice President for Academic Programs and Educational Innovation, provided the Education Committee with an annual update regarding the UW System academic program array. The presentation addressed the growth and elimination of academic degree programs, the expansion of collaborative and distance education programs, and comparisons with other systems of higher education in the United States.

Eckhardt is harnessing data to identify, analyze and quantify the predictive characteristics of successful student innovators and business startups. A survey of UW-Madison students over three years found that more than 460 students had founded companies – something Eckhardt believes no other university knows about its students. Nearly 700 were in the process of forming a company, nearly 1,500 were working at a start-up and nearly 5,200 had taken a course in entrepreneurship.

Lange is putting data to work for improved tracking of entrepreneurship activity in Wisconsin. Hager is using data to understand the art of building capacity to support a thriving entrepreneurial ecosystem.

The Business and Finance Committee heard from UW System Chief Information Officer Steven Hopper on the status of 12 large IT projects underway in the UW System. Most projects were deemed to be on target with respect to schedule, scope and budget, with four relatively minor concerns noted.

Chief Audit Executive Lori Stortz and audit directors provide a high-level overview of the progress management has made toward resolving comments and implementing recommendations included in audit reports.

The UW System Board of Regents will resume its meeting on Friday, Aug. 24, 2018, in Madison.