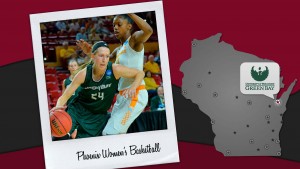 UW-Green Bay has had several reasons to dance over the last month, a couple of which you may have heard about. Both the men’s and women’s basketball teams were named Horizon League champions and earned an invitation to NCAA Tournament. This marked the first time since 1994 that both teams were deemed “dance partners” in post-regular season play. Congratulations to all of the student-athletes who competed. We’re proud of you. 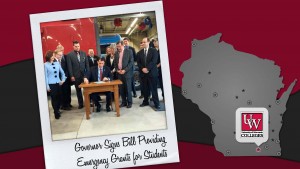 Last month, Governor walked signed a bill that provides money the UW Colleges can use to provide emergency grants to students. These grants can be distributed for unforeseen expenses like medical bills or car repairs that could deter students from continuing in their degree program. This bill is designed to prevent that and help maintain the UW Colleges’ core mission of providing access to students across the state. 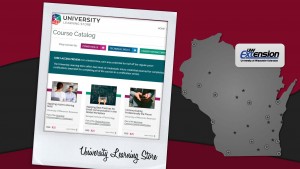 In conjunction with several other top universities, UW-Extension’s division of Continuing Education, Outreach and E-Learning recently launched the University Learning Store. The program will offer industry validated micro-credentials for valuable skills they will be able to include on their resume. These micro-credentials are available for far less cost than a traditional college course and are positioned to address the skills gap through trainings that require hands-on, skills-based assessments. Well done, Chancellor Sandeen and team. 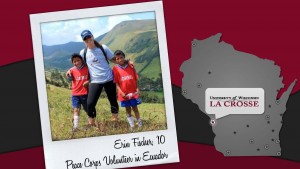 For the first time since 2009, UW-La Crosse has earned a spot on the Peace Corps’ annual list of the top volunteer-producing mid-sized colleges and universities across the country. UWL ranks No. 20 with 14 alumni currently serving overseas as Peace Corps volunteers. Well done, Chancellor Gow. 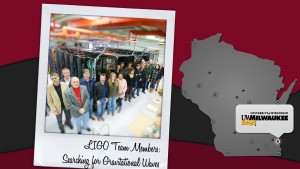 A tremendous research achievement for our newly-minted R1 institution, UW-Milwaukee. You may have read about this in national and even international news: UW-Milwaukee physicists led one of the key teams in a multinational effort to detect gravitational waves, a phenomenon Albert Einstein predicted a century ago. Gravitational waves radiating from an ancient collision of two black holes were detected on Sept. 14. The student-faculty team provided the framework to look for signals in a sea of data collected at the detection facilities. We’re incredibly proud of the discovery and that UW-Milwaukee was part of it, preparing the next generation of scientists. Congratulations, Chancellor Mone. 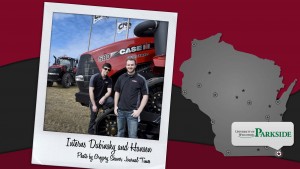 UW-Parkside internships are going international. CNH Industrial scholarships offered through the UW-Parkside Italian Exchange Program enabled Parkside students Jonathan Dubinsky and Christian Hansen to take part in a study-abroad opportunity that evolved into a U.S.-Italian internship, thanks in part to the efforts of UW-Parkside Business Professor Dr. Abey Kuruvilla. Hansen and Dubinsky began the Racine portion of their internships in mid-February and will spend three months at CNH Industrial in Italy this fall. A great partnership and experience. A great partnership and experience for students, Chancellor Ford. 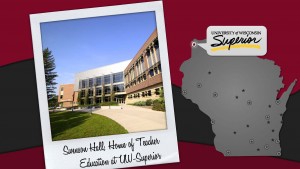 UW-Superior’s Educational Leadership Department has responded to the shortage in Special Education Teachers by announcing a new licensure minor in Special Education. Opening for enrollment this fall, it will provide students the opportunity to earn a teaching license in their major area as well as in special education. Congratulations, Chancellor Wachter. 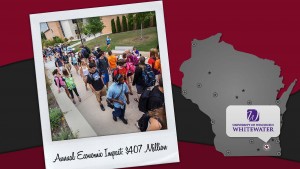 UW-Whitewater’s annual economic impact on the region is more than $407 million. That’s according to a new study, which looked at the campus’s effect on the economy in Walworth, Rock and Jefferson counties. Taking into account university spending on payroll, supplies and capital investments, and spending from students, faculty, staff and visitors, UW-Whitewater accounts for more than $407 million in economic activity and supports 4,300 jobs. The University also generates an estimated $18 million in annual tax revenue for the state, including sales tax, property tax and income tax. Just one more example of our institutions’’ impact, and we’re glad you’re sharing the story, Chancellor Kopper. 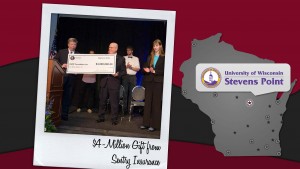 Sentry Insurance presented UW-Stevens Point with the largest donation in the university’s 122-year history last month. The gift of $4 million will endow two new faculty positions and create a new major in data analytics. The gift is the largest single donation Sentry has ever made to any organization. A great collaboration for UWSP and its students, Chancellor Patterson.

A few more quick notes: Two UWSP alumni have started their own aquaponics business supplying restaurants with fresh fish and produce in the La Crosse area. The story reflects a business/job creation effort that is a direct result of the UW-Stevens Point Aquaponics partnership with Nelson & Pade in Montello. This project was selected as one of the 12 original recipients of a UW System Economic Development Incentive Grant in 2013. Regent Regina Millner joined the ribbon cutting in Montello with Chancellor Patterson, Dr. Chris Hartleb, Rep. Joan Ballweg, Mary Ann Lippert of the Governor’s office, and representatives from Sen. Ron Johnson’s office and the Wisconsin Economic Development Corporation.

On May 5, UW-Stevens Point will break ground on the long-awaited, new chemistry-biology building. Construction of the new four-story building is expected to be completed by spring 2018. And, of course, congratulations to the UW-Stevens Point men’s hockey team, which won the DIII national championship – another example of WIAC excellence. 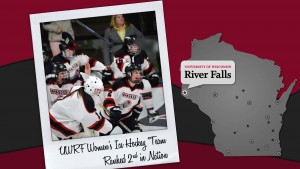 The UW-River Falls Women’s Ice Hockey Team competed in the DIII “frozen four” for the third year in a row.  After beating Elmira College with an overtime goal on March 18, they went on to battle two-time defending national champion SUNY Plattsburgh in the NCAA National Championship game the next day. The team lost, but the Falcons ended up being ranked 2nd in the nation.  Three of the UWRF players have been named to the Division III All-American team. 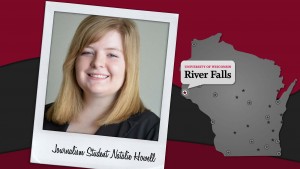 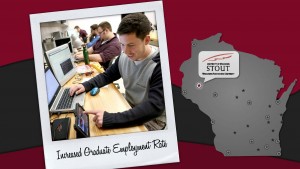 For the second year in a row, UW-Stout saw an increase in its graduate employment rate — 97.3 percent of the 2014-15 graduates were employed or continuing their education within six months of leaving campus. That is up from 97.1 percent in 2013-14 and 97 percent the year before that. Phenomenal, Chancellor Meyer. 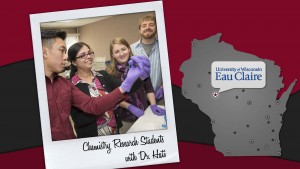 A pair of UW-Eau Claire chemistry professors received a prestigious grant that, combined with an innovative teaching strategy, will increase the number of Blugolds who graduate with real-world research experience. Dr. Sanchita Hati, associate professor of chemistry, and Dr. Sudeep Bhattacharyay, assistant professor of chemistry, received a $380,000, three-year grant from the National Institutes of Health Academic Research Enhancement Award Program to support their research focused on the interplay of protein dynamics and function. Congratulations to the professors, their students and university, Chancellor Schmidt. Well done. 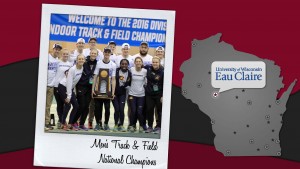 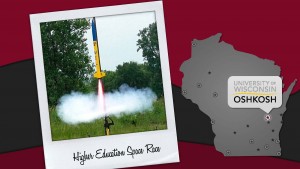 More proof that the sky is not the limit for any UW System student. Drew Farwell, a UW-Oshkosh physics major and nontraditional adult student, has entered into a higher education space race. He is hoping to help UW-Oshkosh become the first university to launch a powered rocket into outer space. It’s an incredible project, drawing upon Drew’s math and science knowledge and skill. I encourage you to check out the story and video on our website and UW-Oshkosh. Let me just say they feature a rocket-mounted camera. Pretty fantastic, Chancellor Leavitt. 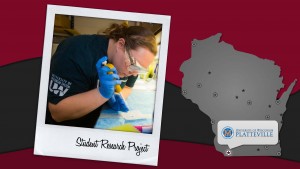 A group of UW-Platteville students are collaborating on a research project that examines a toxin responsible for staphylococcal food poisoning in humans. Students will present their research on Wednesday, April 13, at the Posters in the Rotunda event at the capitol in Madison, Wisconsin. … I’ll circle back on the Posters event in just a moment. Meanwhile, great work, Chancellor Shields. 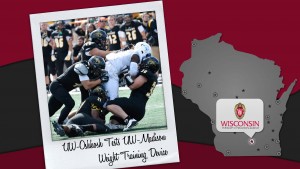 Here’s a story about two UW System institutions collaborating and rallying around a promising start-up. UW-Madison computer science undergraduate Daniel Litvak invented a weight training monitoring device that’s being tested with the UW-Oshkosh football team. “WeightUp” embeds a computer chip, a location-finding device, and a Bluetooth transmitter into an elastic band. With one band on each forearm, the device can signal the bands’ location to a nearby tablet computer to show the location, direction and speed of the lifter’s hands. Pretty phenomenal idea and technology. Well done, Daniel, UW-Madison and UW-Oshkosh. 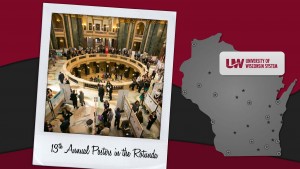 You may have noticed a bit of a theme in this month’s quick spin around the System: Research. Well, next Wednesday, we keep that theme going… The UW System is holding its 13th annual Posters in the Rotunda event showcasing UW undergraduate research from all of the institutions. Outstanding undergraduate student researchers and their faculty advisors from across the UW System will showcase their research and join other UW representatives in making legislative visits.

The UW System is a national leader in undergraduate research, the benefits of which are multifaceted. It contributes to retention, higher graduate rates, and workforce and economic development. The research will be on display from 10 a.m. until 3 p.m. on April 13, and I hope many of you can join us to support the student researchers and learn more about their findings.

WisconsinEye will be joining us to feature the students, faculty mentors, partners and others. The event program is now available on our Posters in the Rotunda website, and we’ll be sure to share more after this great event wraps up.