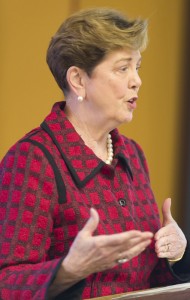 MADISON – American higher education is at a crossroads, a national expert told the University of Wisconsin System Board of Regents on Friday, and that presents not only profound challenges but also significant opportunities for innovative and creative approaches.

“We are experiencing tremendous financial pressures, and they’re coming from all directions … These financial issues are troubling and difficult to manage,” said Molly Corbett Broad, president of the American Council on Education (ACE).

At the same time, she said, these challenges — along with major changes in higher education’s enrollment demographics — are “precipitating some interesting innovation and advances in the teaching and learning process.”

“All of this coming together is persuasive that business as usual is not in the future cards and we must innovate,” said Broad, whose varied experience in higher education includes leadership roles at University of North Carolina, the California State University System, University of Arizona System, and Syracuse University.

She re-emphasized to Regents what is now a common refrain in university worlds: As state support of higher education has declined, dependence on tuition revenue has increased. What makes this dynamic even more challenging, Broad said, is that it also intersects with a time of decreased average family income as well as increasing political and public pressure to keep tuition hikes low.

Broad told Board members that the prevailing practice since the 2008 recession of raising tuition by ever larger amounts is “not a sustainable strategy.” While over the previous five years, the average increase in tuition nationally was approaching 7% per year, Broad said this year’s average rate of increase is 2.7%.

She said the changing demographics in higher education are also putting pressure on existing academic models. Despite popular perception, the so-called traditional student, the 18-year-old who enters college right out of high school, is no longer the norm. Rather, she said, “the overwhelming number of students are what we’re now calling ‘post-traditional.'”

According to 2009 ACE figures, of the 17.6 million undergraduates in the U.S., 15% attend four-year colleges and live on campus; 43% attend two-year colleges; 37% are enrolled part-time; and 38% of those enrolled are older than 25, and one-quarter are older than 30. What many of these students are looking for, Broad said, are credentials that have labor market recognition.

She also noted that about half of all college students today are Pell Grant-recipients.

Several promising models have arisen out of the current environment of challenges, Broad said, including MOOCs (massive open online classes) and the use of “big data” to identify student patterns and then help students complete their degrees more efficiently.

“The third really promising use of technology is right here at UW with the Flex Option,” Broad said, “because it incorporates many of the emerging innovations that are enabled by technology — competency-based education, self-paced learning, modular coursework, customizing the learning. These tools are enabling the delivery of the highest quality educational experience and doing so at a more affordable price.”

“The challenge for higher education is that we need bold and responsible leaders, and we need bold and responsible management of our processes and our models of business,” Broad said. “Innovation is really the imperative, and it is possible, given the breakthroughs that our universities are experiencing in areas like cognitive science, information technology, artificial intelligence. It’s an exciting time to be in American higher education, it’s a fulfilling time to be in higher education … but it’s also a challenging time.”

Full Board is briefed on HRS challenges

Following up on Thursday’s discussions as part of the Business, Finance and Audit Committee, the full Board was briefed Friday on plans for addressing the challenges associated with UW System’s implementation of the new Human Resource System (HRS).

“We are going to be as forthright and transparent as we possibly can in this situation,” said UW System President Kevin P. Reilly. “We will continue to apprise all of you on future developments. We recognize that this will require some uncomfortable public conversations.”

“Our auditor has already begun a vigorous review of issues related to HRS, with an emphasis on shining a bright light on any new issues that have not yet been aired,” said Reilly. “I can tell you that she and her staff will be dedicating a vast amount of time and effort to this project, in close cooperation with others.”

Elizabeth Dionne, UW System’s Director of Operations Review and Audit, explained that her office is looking at “known issues” related to HRS while also working to identify other issues that have not been explored yet. She went on to describe new issues, not covered in the LAB’s audit report, that have a “net fiscal impact” of approximately $1.1 million, dating back to the HRS launch in April 2011.

Of the approximate $1.1 million net impact, approximately $700,000 relates to errors in withholding FICA or income taxes from certain employees. The largest category of such errors relate to FICA payments not withheld from student employees. IRS rules dictate whether or not students are exempt from FICA, based on the number of credit hours they take. If a student changes their course load to less than half-time, such as during summer months, but remains a UW employee, the university is required to withhold FICA payments.  During the summer of 2011, an under-withholding error occurred because the multiple systems tracking student enrollment were not properly integrated with the newly launched HR system.

In addition to the items with a net fiscal impact, Dionne noted other circumstances in which deductions were not properly withheld from employees, but were later identified and corrected. She also reported to the Regents that $450,000 of overpayments to life insurance plan was identified, but the full amount was recovered.
“We will need considerable amounts of both patience and tenacity,” said President Reilly. “We are fixing issues as we go, to the extent we can when we find them, and will continue to fix the rest of the problems going forward.”

In addition to the work being done in Madison, Regent Regina Millner asked about the role of individual UW System campuses.

Larry Henderson, who directs the Service Center where HRS data is collected and managed, assured the Regents that every institution will be part of the solution. He described how UW employee data must align with benefit data maintained by Employee Trust Funds – a separate state agency that manages retirement and health plans. When HRS records don’t match ETF’s data, the individual UW institutions must take timely action to update and correct the information.

Regent Vice President Mike Falbo asked if UW officials have given up trying to collect excess health insurance premiums that were paid.

“No, we have not,” President Reilly responded. “We are still talking with our friends at ETF, and we will persist in those efforts.”

UW-Stout Chancellor Chuck Sorensen explained how a team from the Service Center spent three weeks on his campus helping to improve HRS. “They did a very fine job correcting errors that were made and educating people on how the system is designed to work.”

UW-Parkside Chancellor Debbie Ford described a similar experience. “We had a group from the Service Center come in and do an assessment. We then identified 14 individual tasks we needed to accomplish. This led to improved training, improved integration, and improved understanding of how best to deploy this robust HRS system.”

Chancellor Bernie Patterson from UW-Stevens Point shared some of the difficulties experienced by his faculty and staff as the new system was activated in 2011, when some employees missed paychecks. For some employees who “live from paycheck to paycheck,” this created serious problems. “People pulled out all the stops to get it fixed, but it’s a very difficult problem to deal with.”

“All of us are very embarrassed,” said Regent Jeff Bartell. “The first task should be to find out what happened, but we also need to focus on how we can prevent something like this from happening again. What could we have done? We should learn from this.”

Regent President Brent Smith emphasized his expectation that Regents receive regular updates on information uncovered by the internal and external reviews. “We expect and want information. Not just about the technology, but about what we’ve learned going forward.”

Regent Jerry Whitburn, a former insurance company CEO, compared the situation to other major IT projects. “This is the most complicated, sophisticated HR system ever implemented in Wisconsin, in the private or public sector. No question about it. Is this catastrophic? No. It is something we should we be going through? Absolutely not.”

The Board honored the fifth annual winners of its Regents’ Diversity Awards, established by the Board to recognize and support individuals and programs in the UW System that foster access and success in university life for historically underrepresented populations.

This year’s winners are:

Regent President Brent Smith updated Board members on ongoing communications between UW System leaders and new and returning lawmakers. This includes visits by President Reilly, members of the Board, Chancellors, and other UW staff with members of the Governor’s staff, DOA Secretary Mike Huebsch, legislative leaders, members of the respective Higher Education committees, and the Joint Committees on Finance and Audit.

Smith noted that Governor Scott Walker’s office recently announced that it is seeking applicants for a new student representative to serve on the Board of Regents. Student Regent Katie Pointer’s two-year term is due to expire on May 1.

Smith also updated Regents on the Chancellor searches currently in progress at UW-Madison and UW-Eau Claire. Both searches are “on track,” he said, and the Board is expected to vote on their respective recommended new chancellors at the April board meeting.

UW System President Reilly called the Board’s attention to the significant attention generated by UW’s Flexible Option, including a Jan. 25 story in the Wall Street Journal. He noted that UW Flex has also been featured on Southern California Public Radio, and in news outlets including the Milwaukee Journal Sentinel, the National Review Online, and the American Enterprise Institute. It also was the subject of considerable attention at the recent annual meeting of the Association of American Colleges & Universities in Atlanta.

“More importantly, it is clear from the nearly 650 people to date who have requested more information from UW-Extension about the Flex Option that this new approach has struck a chord,” Reilly said.

The UW System Board of Regents will hold its next meeting March 7, 2013, in Van Hise Hall, Madison