PLATTEVILLE – The University of Wisconsin-Platteville provides a wealth of economic and community support for Southwest Wisconsin, the Board of Regents learned Friday.

In a presentation by a number of campus and Platteville-area officials, Regents heard how the campus’s students, faculty and staff contribute to the well-being of the region. 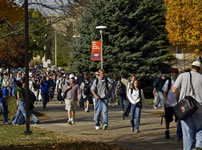 Markee also outlined the campus’s expanding engineering program. Although UW-Platteville is already well-known for engineering, Markee said the program will continue to grow with additional Wisconsin students and through the Tri-State Initiative, under which students from Iowa and Illinois can attend UW-Platteville at competitive tuition rates. To accommodate additional students, the campus has undertaken a fundraising campaign and will soon break ground on additional engineering facilities.

Riedle discussed a project with the village of Potosi, which the campus assisted in the redesign of a boat ramp and, later, the restoration of a brewery. UW-Platteville students from the engineering, communication technologies, business and project management fields worked with the village board over a one-year period to develop physical plans, obtain grant funding and create a publicity campaign for the project. The students also earned credit while working with Potosi officials.

On-campus projects, Riedle said, are also a large part of how students can be directly involved with the community.

“When the Chancellor asks for assistance, we step up to the plate,” she said.

These projects include the design and creation of a new greenhouse facility – nicknamed the Pioneer Gardens – on campus.

Riedle listed several other initiatives undertaken by the School of Education and the Industrial Studies program that connect UW-Platteville, and its students, with the surrounding community.

Regents also heard from Colton Janes, the student senate president at UW-Platteville, who spoke about additional community-related projects in which UW-Platteville students participate.

The Board heard about Badger Camp, a program that serves persons with disabilities. Since 1973, UW-Platteville students have held an annual Christmas Telethon in support of the Camp. The telethon, which is produced in the UW-Platteville television studio, is run almost entirely by students under the direction of a faculty member. Janes also discussed the Residence Hall Association’s annual Blood Drive, which in 2006 boasted a 15 percent donation rate among students, compared to the national average of 5 percent.

Janes also said the UW-Platteville Greek community and athletic teams promote a number of on-campus projects, emphasizing the commitment all of the campus’s students show to the Platteville area.

“The students who attend UW-Platteville really do make this community their home,” he said.

Charles Runde, the president of First National Bank of Platteville, praised UW-Platteville for its work to strengthen the community economy.

“We’re looking forward to the day that one of our current tenants ‘graduates’ and builds a building in our industry park,” he said. “We’re very grateful for UW-Platteville’s leadership with this project.”

Runde also outlined two other economic development projects related to the agricultural industry and business formulation in which UW-Platteville participates.

Regent Danae Davis of Milwaukee lauded the efforts of UW-Platteville to connect with its surrounding community, and said the campus’s regional connection is an example of what happens across the UW System and the state.

“The story is true everywhere we are,” she said.

Regents voted Friday to formally oppose a proposed amendment that would change the state constitution related to defining marriage as between a man and a woman, saying the amendment would be a significant setback for the university as it seeks to recruit and retain faculty and staff.

A clause in the proposed amendment would not allow Wisconsin to recognize a legal status “identical or substantially similar” to marriage, UW System Legal Counsel Patricia Brady told a Regent committee on Thursday. This could lead to “uncertainty” about what benefits the university or state would be able to provide to employees, Brady said.

Current state law prohibits the UW System from offering domestic partner benefits, putting the state at a competitive disadvantage in recruiting and retaining university employees. UW-Madison is the only member of the Big Ten that does not offer such benefits to its employees.

In introducing the resolution to the full Board, Regent Charles Pruitt of Shorewood reminded fellow Regents that, two years ago, the Board took a strong position in favor of offering domestic partner benefits as “critically important for this university to be able to compete in a global economy.” The resolution was approved by the Board’s Business, Finance and Audit Committee on Thursday.

Pruitt reminded Regents that the Greater Madison Chamber of Commerce unanimously approved a similar motion to oppose the amendment after learning more about how it could affect the competitiveness of Madison businesses.

Student Regent Tom Shields reiterated that he has heard from several concerned students who wanted the Board to address this issue. Student Regent Chris Semenas of UW-Parkside also urged the Board to approve the resolution. He noted that members of the Board come from a variety of backgrounds and perspectives, but all have the university’s interests in mind.

“We’re all here, and we want to see what’s best for higher education in Wisconsin,” Semenas said. “It’s about standing up for what’s right.”

The Board approved the motion, with Regent Gerard Randall of Milwaukee voting no.

Members of civic organizations across the state are committed to sustaining and supporting the University of Wisconsin System, Regents heard Friday.

In an effort to spread good news and encourage support for the UW System, Regent President David G. Walsh of Madison said he has traveled throughout Wisconsin, addressing civic organizations in a number of communities.

Despite some political criticism of the UW, citizen support for the university is strong, Walsh said.

“Nothing could be clearer than the fact that people of Wisconsin care about the University of Wisconsin System,” he said.

Walsh noted that citizens are most interested in accessibility, affordability and admissions. He mentioned that many of the people he spoke with did not have the full story when it comes to UW System admissions, perhaps due to misleading political advertising.

“It’s too bad that 30-second sound bites try to define an admissions policy,” he said.

Walsh also encouraged other members of the Board to travel to Wisconsin communities to talk with citizens, and said the Regents’ next goal should be to redefine what the university needs in terms of its budget.

“The bottom line is we need a reinvestment in higher education in the state of Wisconsin,” he said.

UW System President Kevin P. Reilly said he, too, is hearing similar messages from citizens around the state. He congratulated UW-River Falls, UW-Eau Claire, and UW-Stout for hosting Synergy 2006, a conference focused on advancing economic development in West Central Wisconsin, where Reilly said he talked with citizens about the importance of the UW System’s “Growth Agenda for Wisconsin.”

The Growth Agenda for Wisconsin, will increase the number of four-year college degree holders around the state, and use the university’s resources to grow Wisconsin’s economy, Reilly said.

“We all want to make Wisconsin a more-attractive place for Wisconsin families and taxpayers, and to better-equip the state to be a place where knowledge-economy businesses can thrive,” Reilly said.

Reilly said he’s also recently talked about the Growth Agenda with UW-Superior alumni, and student government representatives, and with representatives of the faculty and academic staff.

Reilly reported that AFSCME, the primary union that represents classified state employees who work for the UW System, recently passed a resolution in support of the Growth Agenda.

In a letter to Reilly, AFSCME executive director Martin Beil said the motion shows the Wisconsin citizens feel strongly that the UW System is a tremendous asset.

“The University System in Wisconsin is at the bedrock of economic growth and the very future of our State,” Beil wrote.

Regent Jesus Salas of Milwaukee congratulated Reilly for meeting with unionized employees, noting that the group is an important stakeholder with historical ties to the university and the state.

Reilly also reminded Regents that it was 35 years ago that the state Legislature voted to create a unified system of public higher education by merging the University of Wisconsin and the Wisconsin State Universities. Today, the UW System fulfills the intent of this merger by maintaining academic quality and controlling costs through cooperative efforts, he said.

“I argue that this merger, which, as I recall, passed back then by just one vote continues to serve Wisconsin well,” Reilly said. “So well, in fact, that, 35 years later, I think we often take it for granted.”

For example, Reilly said the system structure means state only pays for one medical school, and one law school, both expensive professional programs.

“While we make it a point to offer a variety of academic programs and services available across our 26 campuses, we don’t have the unnecessary duplication found in states that don’t have higher education systems,” Reilly said.

Reilly also remembered the leadership of Joseph F. Kauffman, who died last week at the age of 84. Kauffman was an emeritus professor of educational leadership and former dean of students at UW-Madison. He is often remembered for his work in helping to establish the Peace Corps.

In addition, Reilly praised the legacy of Reuben Lorenz, a former UW System vice president for finance and trust, who died in September, also at the age of 84. Among many other accomplishments, Lorenz’s service to the university included key leadership during the merger that created the current UW System.

Committee to work with campus neighbors

Regent President Walsh said Friday that he intends to ask members of the Board to work closely with Wisconsin residents who are concerned about the activities of students in neighborhoods around UW campuses.

Regent Salas said he and other Regents have received communications from residents in the Milwaukee area related to student misbehavior off campus, as well as about the university’s still-developing plans to purchase the Columbia/St. Mary’s complex and convert it to university facilities. Some of these residents, Salas said, are interested in strengthening state statutes that allow the university to reprimand students for inappropriate off-campus behavior.

Walsh said a Regent committee will be named to communicate with neighborhood groups, local officials, and students to hear concerns and to review the impact of any proposed changes to state statute. The committee, which will include student representation, will allow the Board and Chancellors to be responsive to neighborhood concerns, Walsh said.

To close their Friday session, Regents passed a resolution of appreciation for host campus UW-Platteville. Speaking on behalf of the Board, Regent Judith Crain of Green Bay thanked Chancellor Markee and his colleagues and staff for a hospitable and informative experience.

The UW System Board of Regents will hold its next meeting on Thursday and Friday, Nov. 9-10, in Madison.