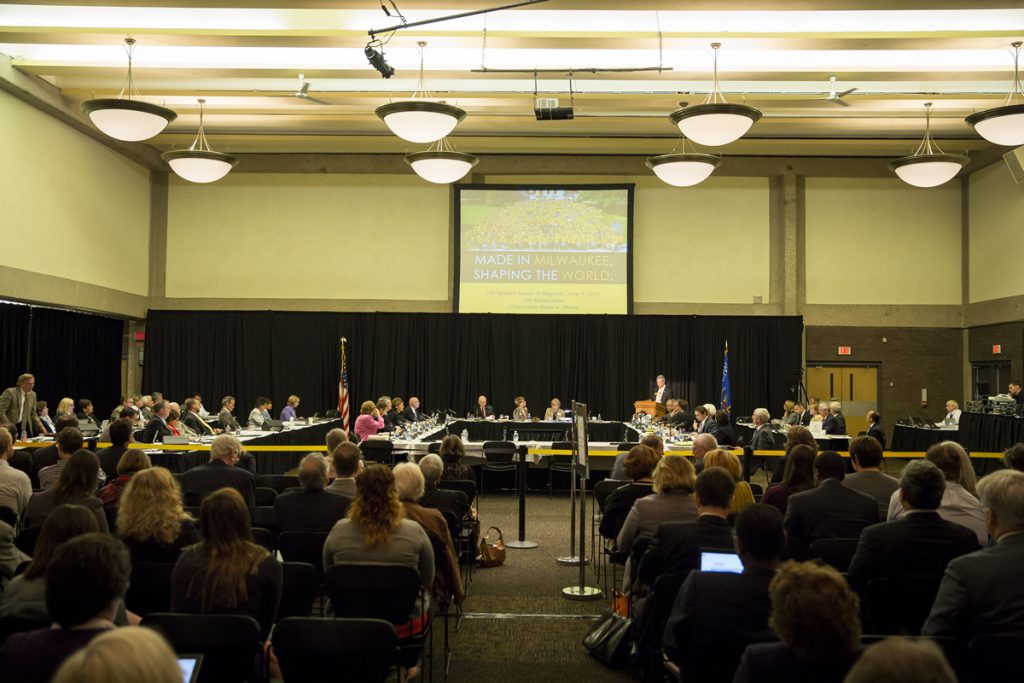 MILWAUKEE – With college affordability a top priority, the University of Wisconsin System Board of Regents approved a UW System proposal recommending increased state funding for financial aid at its meeting Thursday at UW-Milwaukee.

The UW System will request an increase of $6,384,100 in 2017-18 and an additional $6,384,100 in 2018-19 for the Wisconsin Grant-University of Wisconsin (UW) program, which is the state’s largest financial aid program for students attending UW institutions. The program is administered by the state’s Higher Educational Aids Board (HEAB).

The Regent-approved financial aid request will now be forwarded to HEAB for inclusion in that agency’s biennial budget submission to the Department of Administration.

“At a time when there is legitimate concern about the rising levels of student debt, what we’re really talking about is not just the cost of a student’s UW experience, but rather the net cost. The amount of state and federal support a student receives plays a significant part in keeping that net cost down. It is incumbent on us to advocate for the support necessary for our students,” said Regent President Regina Millner.

“This is an overdue and prudent enhancement of state support for our students,” said Regent Gerald Whitburn. “I think it should be a priority in the upcoming budget process.”

The Regents voted unanimously to approve a $6.23 billion annual operating budget for 2016-17 that includes significant reductions in fund balances.

“As our entire state continues to feel the ripple effects of an historic economic downturn, UW Chancellors continue to make tough choices to find ever greater efficiencies, while also focusing on educational programs and research efforts that will fuel economic recovery,” said Regent President Millner. “Also critically important are the broader benefits that all of Wisconsin derives from having an educated workforce and citizenry. For that, we want to ensure UW System institutions retain a robust capacity to serve as economic engines for the state.”

UW-Milwaukee is ‘Shaping the World’ 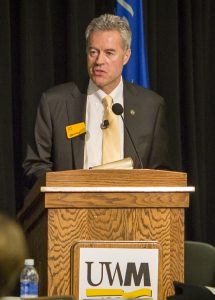 Leading the presentation, “Made in Milwaukee. Shaping the World,” host Chancellor Mark Mone told Regents that UW-Milwaukee’s recent designation as a top tier research university by the Carnegie Classification of Institutions of Higher Education places the university among the top 115 research institutions in the United States.

“Public research universities like UW-Milwaukee introduce vital research and innovation,” Mone said, noting that UWM faculty members are working on drug development, Great Lakes research and other innovations that will improve lives worldwide while contributing to the Wisconsin economy.

UWM’s research mission also allows it to provide students with unique learning opportunities, Mone said, adding that students engaged in undergraduate research are more likely to complete their degrees and are often better prepared for their post-graduate careers.

Students also benefit from UWM’s partnerships with businesses and community organizations that provide internships and other training; the Lubar Center for Entrepreneurship, which provides training in entrepreneurial thinking and practice; and a math intervention program that has helped students more quickly accumulate credits toward their degrees, reducing their time to graduation and student debt.

Mone pointed out that UWM is a leading educator of first-generation college students, adults age 25 and older, students of color and veterans. It is one of only three universities nationwide that partners with all three of the major veteran support programs — the Pat Tillman Foundation, Upward Bound and Vet Success.

Noting that most UWM graduates remain in Wisconsin, Mone said the university is one of the best investments that the state and the UW System can make, benefitting Wisconsin students, families, and taxpayers.

The UW System is actively taking steps to set policies that control access to computer networks and safeguard the flow of information, according to David Miller, UW System’s Vice President for Administration.

Although a systemwide Technology and Information Security Council (TISC) was formed in 2011, the UW System has relied primarily on institution-level security policies and procedures. Efforts began in 2015 to augment each institution’s work by developing a systemwide IT security program.

The subsequently-adopted Regent Policy Document 25-5, Information Technology: Information Security, describes the process by which IT security will be comprehensively managed across the System.

”The UW System is committed to protecting the information that is critical to support teaching, research, business operations, and our educational community,” Miller said, as part of a presentation updating Regents on information security efforts.

“Cyber security is not only an administrative and IT community responsibility, but everyone has a responsibility for the proper handling and protection of confidential information. The enhanced policies being developed will apply to the entire UW System, including faculty, staff and students,” Miller said. 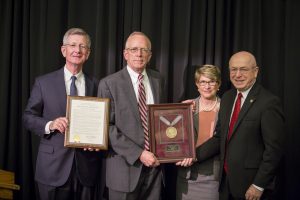 The Board recognized the service and accomplishments of Regent Emeritus Charles Pruitt, whose term on the Board has concluded. Pruitt served 13 years as a Regent, including two years as Board president (2009-11) and two years as vice president (2007-09).

Drawing on his experience serving with three UW System presidents, Pruitt said he had two main thoughts to share with those who follow him in service on the Board.

“The Wisconsin Idea is the single most powerful mission statement of any public university system in the nation,” Pruitt said.

He also encouraged Regents to embrace their role as advocates of the University. Indeed, he challenged anyone who has seen the look of pride and joy in the eyes of new graduates and their families, or the life-changing discoveries made by UW researchers, or the magic that happens when a great teacher inspires students, not to take on that role. “It is your highest calling,” he said.

Regent President Millner introduced three new colleagues on the Board: Lisa Erickson of Osceola, Tracey Klein of Brookfield, and Bryan Steil of Janesville.

Lisa Erickson, who will serve as the non-traditional Student Regent, decided to return to college after a 26-year hiatus to finish her degree in journalism, with a minor in food science. She attends UW-River Falls.

Bryan Steil is corporate counsel at Regal Beloit Corporation, which is a leading manufacturer of motors and motion control products. He previously worked as an attorney at a large international firm in Chicago and served as an aide to Congressman Paul Ryan in Washington, D.C.

The Education Committee heard a first reading of a proposed mission change for UW-Oshkosh. The new mission statement mentions liberal education to reflect the significant curriculum reform efforts that have taken place over the last five years through the development of the University Studies Program (UW-Oshkosh’s new general education program); the addition of a global learning outcome; an emphasis on economic development and entrepreneurship; and focus on civic engagement and sustainability.

In other action, the Education Committee:

The Business and Finance Committee approved new application fee rates for UW-Madison undergraduates of $60 (a $10 increase) and undergraduates at other UW institutions of $50 (a $6 increase). Changes were also approved for UW-Madison Graduate and Professional Schools applications, which would change to $75 (a $19 increase) for the Graduate School, School of Pharmacy, and the School of Medicine and Public Health.  For the School of Veterinary Medicine and the Law School the approved new rates will be $60 (a $4 increase).

The Audit Committee approved the UW System’s fiscal 2017 audit plan as presented by Chief Audit Executive Lori Stortz. The plan was developed based on results of a risk assessment survey, emerging topics in higher education, and discussion with peer institutions. Stortz told Regents that auditing of the implementation of recent Fair Labor Standards Act changes will be a high priority in the second half of 2016. Given the widespread implications, she said IT security also would be given the highest priority.

In a presentation for the REDI Committee, UW-Milwaukee Chancellor Mark Mone described UWM’s $62 million in 2015 research expenditures and new R1 status as the outcome of decades of strategic thinking, planning and top-tier research by faculty and staff.

“Our research is leading to solutions that have a significant impact on society,” said Mone, citing research projects that are on their way to commercialization and could boost the economy of southeastern Wisconsin while impacting lives on a global scale. A key example: cost-effective sensors that can detect drinking-water contaminants like lead and could provide early detection of the Ebola virus.

UWM Research Foundation President Brian Thompson, who will direct the new Lubar Center for Entrepreneurship, highlighted several examples of UWM’s entrepreneurial successes with its “ideas challenge” programs that encourage students and faculty to nurture business and product ideas and research breakthroughs into commercial development. He pointed to the current NSF-funded iCorps Entrepreneurial Cluster that is based at UWM, one of just 35 such sites in the country.

“ICorps is the gold standard for maximizing the success of technology leaving campus,” Thompson said. “It’s not about how to start a business. It’s about how to find out if there’s a market for your business.”

“The new center will educate students in life as well as in their jobs,” said David Lubar, president and CEO of Lubar & Co.

The Capital Planning and Budget Committee approved UW-Madison’s request for authority to construct the $47 million Witte Hall Renovation project, which fully renovates the residence hall. Also approved was UW-Madison’s request for authority to increase the budget of the Memorial Union Renovation project by $4 million to provide funding for unforeseen conditions that were discovered during the project’s construction.

All Committee approved resolutions will come before the full Board on Friday.