Cross recommended as Chancellor of UW Colleges and UW-Extension 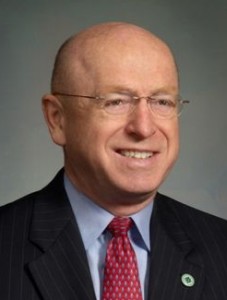 UW System President Kevin P. Reilly and a special committee of the UW System Board of Regents announced their recommendation today.  Following action by the full Board on December 10, Cross would step into his new leadership role sometime in February 2011.

Since 1998, Cross has been President of Morrisville State College, a residential Agriculture and Technology College of the State University of New York (SUNY). He led that school in developing and implementing a new college vision and strategic plan, with a focus on academic quality, new educational offerings, and entrepreneurialism. Cross spearheaded several agriculture, energy, and technology initiatives, including the ThinkPad University partnership with IBM, a biodiesel co-generation project, and a new emphasis on rural entrepreneurship.

Cross served as President of Northwest Technical College in Bemidji, Minn., from 1992-98.  He previously was a department head and a professor at Ferris State University in Big Rapids, Mich.

“This position demands a unique skill set, and Dr. Cross’s background is a great match. He has wide-ranging experience with all of the roles our two institutions must play in the life of this state and the nation. He has led both two-year and four-year campuses. In New York, he’s worked in the biggest comprehensive university system in the nation. But having spent many years in Minnesota and Michigan, he’s also no stranger to the Midwest,” Reilly said.

“His experience with the agriculture industry, distance learning, and economic development are clear evidence that he’s already embraced the Wisconsin Idea, even before moving here.”

“Everyone I met, whether from the UW Colleges or from UW-Extension, seemed personally committed to removing any and all barriers that might prevent the people of Wisconsin from accessing the resources of the University or using the resources of the University to solve problems challenging the state,” Cross said.  “They were literally ‘living’ the Wisconsin Idea daily and doing it proudly.  I was impressed and inspired.  I look forward to working with these committed colleagues.”

Cross was born and raised on a dairy farm in Michigan. He and his wife, Miriam, a piano teacher, have four children and four grandchildren.  A Vietnam War veteran, Cross served with the U.S. Army.

“Additionally, we sought an individual with high integrity, strong communication skills, and a resilient sense of humor, someone who would represent us well across our stakeholder groups – 4-H youth, college students, faculty and staff, chamber representatives, farm families, the Board of Regents, and his chancellor peers. Dr. Cross clearly demonstrates these qualities,” said Kniep.

“Dr. Cross comes to Wisconsin with extensive experience in leading complex organizations and multi-campus institutions. He has demonstrated a willingness to lead in challenging times and situations. He is a seasoned leader who is well prepared to lead UW Colleges and UW-Extension,” Kniep said.

If confirmed by the full board, Cross will succeed former Chancellor David Wilson, who stepped down in June 2010 to become President of Morgan State University in Baltimore.  UW-Madison Vice Provost and Dean of the Division of Continuing Studies Marv Van Kekerix is serving as Interim Chancellor.

“UW Colleges and UW-Extension have similar missions to make the benefits of higher education available in all corners of Wisconsin, but each institution also has its own history, culture, and constituencies. We are confident that Dr. Cross will bring to us the unique experience and skills needed to leverage the strengths of both, and enable them to work collaboratively while not abandoning their respective identities,” said Regent Jeffrey Bartell, chair of the Board of Regents special committee that interviewed all of the finalists.

The UW Colleges and the UW-Extension are two statewide institutions led by a single chancellor. UW Colleges is comprised of 13 freshman-sophomore campuses and UW Colleges Online that offer an associate degree in arts and science and prepare students of all ages and backgrounds for baccalaureate and professional programs. The UW-Extension includes Cooperative Extension offices in 72 counties and three tribal nations, 12 Small Business Development Centers and Outreach and E-Learning programs delivered via the 26 UW System campuses and distance-learning channels, as well as the statewide networks of Wisconsin Public Radio and Wisconsin Public Television.