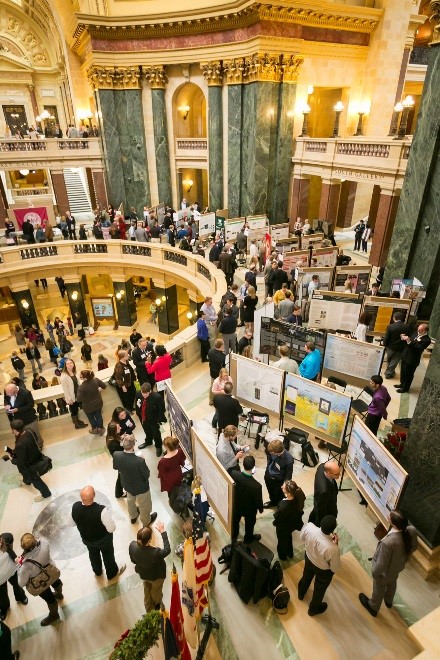 Exploring Snapchat as a dynamic tool for social exchange in persons with language impairment.

The direct effect of cycling on neuromuscular control of running in triathletes.

Those are just three of the undergraduate research and scholarly topics among the dozens that University of Wisconsin System students and faculty research mentors will showcase at the 13th annual “Posters in the Rotunda” event on Wednesday, April 13.

State legislators will join UW System and institutional leaders in welcoming 140 students and nearly 90 faculty mentors to the State Capitol rotunda. Undergraduates from the System’s 26 campuses will set up poster displays and share the findings of their diverse research subjects. Many topics involved multiple academic years of study and collaboration with faculty mentors and community partners throughout Wisconsin.

UW System President Ray Cross will welcome students, faculty members and other guests at the 13th annual Posters event. The event kicks off at 9:30 a.m. with welcome remarks in the Grand Army of the Republic Room.

Posters will remain on display until 3 p.m. in the Capitol Rotunda on April 13.

The UW System has earned a national reputation as a leader in undergraduate research, which contributes to the state’s priorities, including retention, graduate rates, and workforce and economic development.

“The issues being addressed or investigated by UW students are real-life issues affecting Wisconsin citizens and communities. The research being done here has the potential to inform public policy and decisions made by the private sector. It is a powerful illustration of the UW System’s ongoing commitment to the Wisconsin Idea,” Cross said.

Wisconsin Eye will provide live coverage of the event’s opening remarks by President Cross. Wisconsin Eye also expects to highlight at least one presenter from each UW institution as part of a program on the Posters in the Rotunda event to be aired at a future date.

Just a few of the research projects to be showcased on April 13 include:

More information on the Posters in the Rotunda schedule is available at http://www.wisconsin.edu/posters.