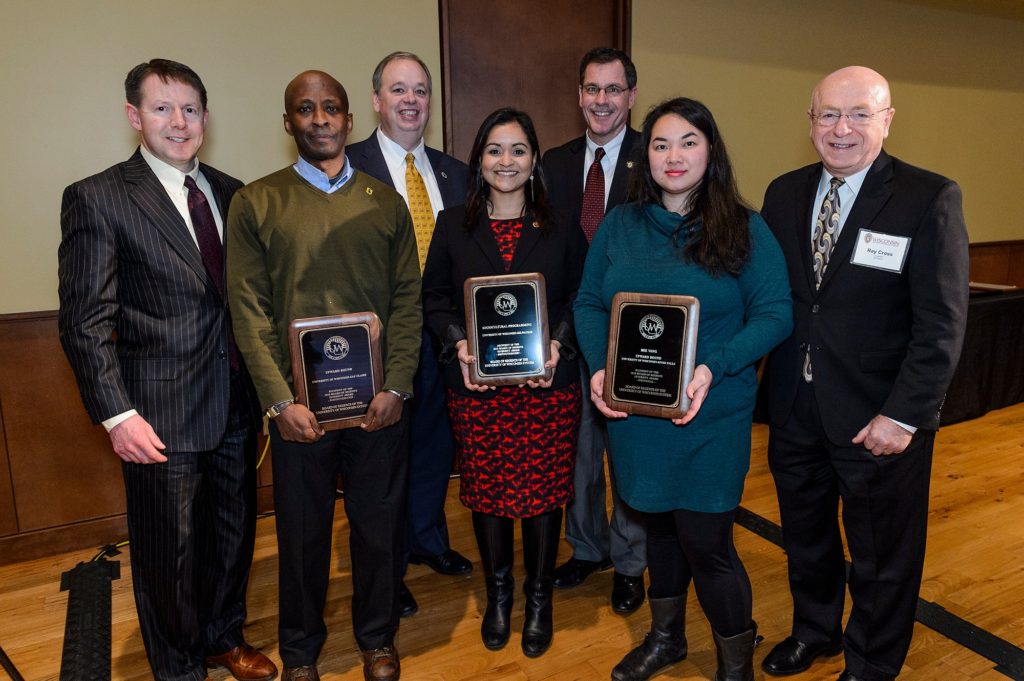 MADISON – The University of Wisconsin System Board of Regents honored the 10th annual recipients of its Regents’ Diversity Awards Friday. The awards recognize individuals and programs that foster access and success for students who are members of historically underrepresented populations.

Regent Mark Tyler, chair of the selection committee, said the award recipients show “a genuine respect for human differences, a deep attentiveness to the learning process, and a keen responsiveness to students and their educational needs. We are proud to recognize their accomplishments and proud they are part of the UW System family.”

This year’s Diversity Award winners are:

Since Bee Vang became director in 2011, the federal TRIO Upward Bound grant has been successfully renewed twice (2012-17 and 2017-22) through the U.S. Department of Education’s competitive grant process.

“In my program, we believe that it’s through building positive peer relationships to support one another through maintaining participation standards and dynamic programming that we have been as successful as we have in helping low-income students and first-generation students become successful,” Vang said. She also thanked her students. “It’s because of their hard work that I’m able to do this amazing work.”

Under the leadership of Claudia Guzmán, and with the assistance of two student employees, Sociocultural Programming creates spaces and experiences at UW-Milwaukee that help students of color feel connected to and valued by their campus community.

Guzmán called the program’s student staff the “heart and soul” of the work being done. “They devote their out-of-class time to doing work that is significantly impactful to students of color but also to all students on our campus who want to make a difference, who want to be connected, who want to make our campuses places where individuals can thrive and grow and explore their identities and be fully who they are as they explore who they want to become,” said Guzmán.

She also thanked UWM and the Board for ensuring that “values are not just values and ideals, but they are action-oriented work that has a real impact on our campuses and on our state.”

For nearly three decades, the UW-Eau Claire Upward Bound program has had a significant impact on closing the opportunity and equity gap for low-income, first-generation college students. For the past five years, students in the program have had a retention rate between 97 and 100 percent.

Program director Kimamo Wahome saluted his co-workers for “their work, their dedication, their excellence, more than anything else. They do the hard work each and every day.” He noted that half the current office staff are Upward Bounds program graduates. 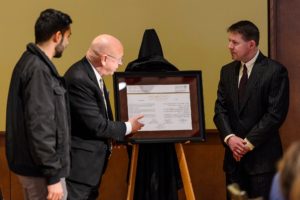 On Jan. 18, Behling signed on behalf of UW System an historic agreement with the University of Nizwa that expands the partnership to a statewide collaboration with additional UW campuses.

“Focusing on workforce and economic development, this agreement will create unique opportunities for partners on both sides,” Behling said. The agreement will build on an existing partnership originally with UW-Oshkosh that dates back to 2001, he said. The collaboration has expanded to include formal partnerships between University of Nizwa and UW-Madison, UW-Platteville and UW-Eau Claire.

Behling also noted that Johnson Controls — a Wisconsin business partner – is in discussions with the University of Nizwa to help build what is believed to be the first sustainable “green campus” in the Middle East. Behling said the partnership “uses the same model of campus-based, industry-university collaboration, research, and internship” as Johnson Control’s collaboration with UW-Milwaukee.

“I see these partnerships as another example of the UW System aligning with the needs of Wisconsin’s economy and working together to find ways to address the challenges facing Wisconsin employers now and in the future,” Behling said.

In the wake of widespread reports of disturbing sexual assault or sexual harassment, President Cross called for “each of us to step up and do our part in creating a culture that helps to prevent sexual assaults and harassment from happening in the first place … and also to encourage and empower survivors of such acts to come forward.”

Cross noted that the UW System put forth a comprehensive new Board of Regents’ sexual assault and harassment policy in 2016 that mandates training for all employees and students, and creates a clear reporting path and requirement. “We are all committed to making our campus communities safe and welcoming places to live, learn and work,” he said.

But still more should be done, he said. “While the UW System can and should do its part to establish policies, provide training, dedicate resources, and support our employees and students, the problem is bigger in our society and we all need to do more,” Cross said.

Cross told Regents he will be working closely with Chancellors and shared governance groups to identify ways in which UW System might “build on the good work we have already done and continue to promote significant and lasting cultural change. This administration and this Board will act swiftly and decisively on these matters.”

“Ultimately, this is about people and who we really are,” Cross said. “It is about doing what is right – for everyone.”

Cross also reported on a recent meeting with Speaker Paul Ryan, where reauthorization of the Higher Education Act and restoration of the Perkins Loan program were discussed. 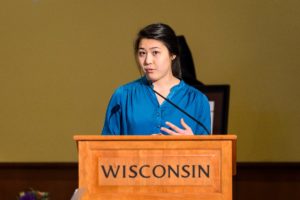 Spotlighted UW-Madison student Isabel Markowski speaks during her presentation at the UW System Board of Regents meeting. (Photo by Jeff Miller/UW-Madison)

As part of his regular News Around the UW System report, Cross told Regents that UW-Parkside graduated 8% more students in 2017 than the previous year. In the past seven years, more students have graduated from UW-Parkside than during any other seven-year period in the university’s history.

For his Student Spotlight, Cross introduced Isabel Markowski, who expects to graduate from UW-Madison this spring with a degree in Nutritional Science and a certificate in Environmental Science.

“One challenge that I’ve faced here is there’s so much going on, so many opportunities and I’m the buffet girl who likes to try anything and everything,” Markowski said. “It’s because of this challenge that I’ve worked so hard to hone in on what I’m most passionate about and how I can make a difference.” 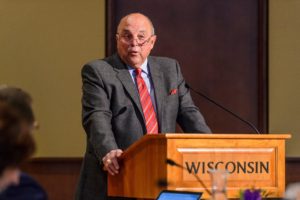 Director of Athletics Barry Alvarez led UW-Madison’s presentation of its NCAA Division I Athletics 2016-17 Annual Report. He told Regents that the program’s athletes are excelling both on the field of play and in the classroom.

Alvarez reported that the UW football and men’s basketball teams extended their streak of consecutive years with a bowl appearance and NCAA men’s basketball tournament appearance to 15 years – the longest such streak in NCAA history. UW student-athletes are also succeeding, he said. The cumulative GPA for all Wisconsin student-athletes at the end of the fall of 2017 was 3.089.

Alvarez also reported that UW Athletics’ internal controls (compliance) were audited by the UW System and received an overall audit rating of “excellent.” In addition, the department reported no major violations of NCAA rules and 20 secondary violations, which is consistent with reporting from previous years.

Addressing campus climate and safety issues, Alvarez said UW Athletics will be undertaking a review of health and safety-related policies, procedures and practices. “The well-being of our student-athletes and staff is at the top of my priority list and I have every confidence that we are handling those areas with care and professionalism,” Alvarez said. “But we can always do better.” 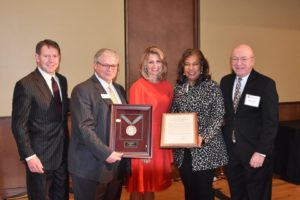 Regents presented a resolution of appreciation to recognize Regent Emerita Lisa Erickson for her service to the Board of Regents. Erickson, who served as the non-traditional student Regent from 2016-17, graduated from UW-River Falls in December, ending her term.

Reflecting on her time on the Board, Erickson said it allowed her to “see first-hand the differences that an education can make in people’s lives, and gain a deeper understanding of how higher education impacts the state economy.”

UW-Madison was also recognized for hosting the February 2018 meeting.

The next University of Wisconsin System Board of Regents meeting will be April 5-6, 2018, in Madison.

See the full gallery of UW System Board of Regents meeting photos for Feb 9, 2018.