MADISON – In an effort to continue its recognition of the best educators in the UW System, the Board of Regents Friday (Sept. 7) honored two professors and an academic department for their work to give their students an educational experience like none other.

The Board presented the 15th Annual Teaching Excellence Awards to:

Regent Danae Davis chaired the selection committee, and said the process of choosing just three award winners was a challenge.

“We seemed to suffer an embarrassment of riches,” Davis said in reference to the number and quality of the nominations.

“These teachers go well beyond the call of duty,” she said. “These awards recognize that teaching is not merely a job, but a calling.” 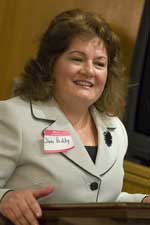 The first to receive an award was UW-Milwaukee Psychology Professor Diane Reddy. In her long teaching career, Reddy directed numerous doctoral and master’s theses and received national recognition by the American Psychological Association for her work as a consultant on teaching health psychology. Furthermore, Reddy has initiated a hybrid learning structure called U-Pace that combines face-to-face and online learning activities.

“While the task of choosing recipients of this award is never an easy one, Prof. Reddy’s accomplishments clearly stood out for those of us on this committee,” said Regent Jeffrey Bartell, a committee member who introduced Prof. Reddy.

In accepting her award, Reddy talked about how her own teaching style changed throughout her time at UW-Milwaukee, evolving from a lecture-based curriculum to one where students were actively engaged with the course material. She said her goal was to change student roles from spectators to participants, and the move had immediate positive effects on student interest in course material while increasing discussion.

Reddy also discussed her participation in UW-Milwaukee’s U-Pace initiative, which allows students greater flexibility in their learning. She said U-Pace has increased student success, particularly among students from traditionally underrepresented backgrounds and those with lower GPAs and ACT scores.

“I am proud to have had the privilege to teach for the past 24 years at UW-Milwaukee, one of the outstanding universities in the UW System,” she said. 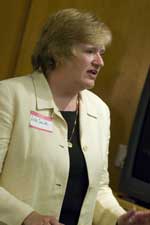 Next to receive a Teaching Excellence Award was Lois Smith, a marketing professor at UW-Whitewater. Regent Jesus Salas, who introduced Prof. Smith, outlined her ability to provide personalized assistance to each of her students, and her desire to prepare students not only for a career, but also for life outside of their post-collegiate jobs.

“Her students point to her infectious passion for teaching, her availability outside the classroom and her ability to accommodate various learning styles,” Salas said.

Prof. Smith said she felt like she was accepting the award for all UW System faculty, saying it gives educators pride in their work and shows that the university’s leaders recognize high-quality teaching. Smith, who is a graduate of UW System institutions, explained how a supportive environment plays an important role in improving and maintaining teaching quality and making student learning more accessible and positive.

Smith said despite all her efforts, her students give her far more than she could ever give them, and that their generosity is always appreciated.

“I can’t think of a career that would ever be more fulfilling than being a faculty member at UW-Whitewater and being part of the UW System.” 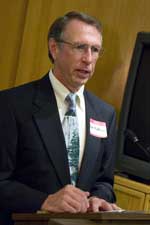 Prof. Max Anderson accepts the award to an academic department or program.

Prof. Max Anderson was present to represent UW-Platteville’s Civil and Environmental Engineering program in accepting the award presented to an academic department or program. Regent Colleene Thomas, who introduced Prof. Anderson, pointed to the important work being performed in the department, particularly in light of the country’s aging infrastructure.

“The department is passionate about its discipline and the vital role it plays in American society,” she said.

Thomas said the department – in which three of the 11 faculty are UW-Platteville graduates themselves – make student learning and success its primary mission, and that it has taken steps to increase departmental diversity as part of that mission. Graduates of the program, according to Thomas, have a 100 percent job placement rate after six months.

Prof. Anderson said the department’s recruitment of highly motivated teachers, and the high levels of camaraderie and collaboration between faculty members all led to its nomination for the award.

“We as a faculty work together to improve teaching and learning,” he said, also noting the department’s openness to new ideas and willingness to embrace change.

In an effort to keep Regents up-to-date on the ongoing review of the UW System’s security policies, UW System Executive Senior Vice President Don Mash presented to the Board a progress report on the work of the President’s 2007 Commission on University Security. The Commission, led by UW-Madison Police Chief Sue Riseling, was appointed by President Reilly in the wake of the April shooting at Virginia Tech University. 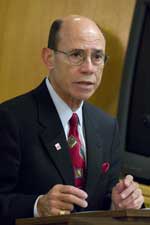 Mash told the Regents that the Commission was currently reviewing recommendations put forth in reports analyzing the Virginia Tech incident, and that a final document would be issued after Gov. Doyle’s Task Force on University Security has completed its similar work. He said it will likely take more than changes to university policy to satisfy the recommendations of the Commission.

“There is no question in reviewing this final material that the matter of state administrative code will figure prominently into the aftermath of this in terms of how we address it and going forward,” he said.

Mash pointed to work already performed by individual campuses in the aftermath of the Virginia Tech shooting, and that UW System leaders are now attempting to focus and coordinate these efforts.

Chief Riseling, who said the UW-Madison campus was already dealing with six cases after just four days of school, strongly recommended each campus ensure they have a comprehensive review team to analyze and act on circumstances that could pose a threat to campus security.

“What really I think might need a little review on each campus is whether or not your review team is really trained to the task,” she said. “If we do nothing else, we’ve got to do this one.”

The Board of Regents also began discussions on possible revisions to its meeting schedule, at the suggestion of Board President Mark Bradley. Several Regents expressed the need for more efficient, substantive meetings, while others recognized the camaraderie that is formed by more frequent sessions.

After hearing committee reports, the full Board also approved changes to the university’s strategic asset allocation and reconfirmation of its spending plan and passed the following resolutions:

The Board then adjourned for a brief closed session.

The Board of Regents will hold its October 2007 meeting on the UW-River Falls campus.