Alumni satisfaction an endorsement of UW

MADISON – Eleven University of Wisconsin four-year campuses took part in a recent survey of young alumni that was conducted by the American Council on Education, and the UW System Board of Regents heard the results on Friday.

“What I’m about to give you is complete and unambiguous good news,” said Terry Hartle, Senior Vice President of Government and Public Affairs at ACE. 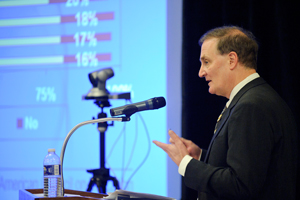 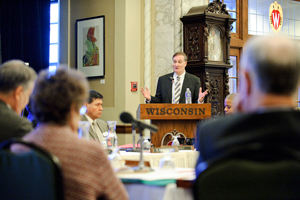 Hartle told Regents that when it comes to satisfaction with their educational experience at the UW, 98% of young alumni reported a “favorable” impression of their alma mater.  About 94% of young alumni surveyed agreed that it was worth all the time and money invested, and 85% reported that they were “effectively prepared with the knowledge and skills they needed.”

Calling such positive numbers “stunning,” Hartle added, “This is just an extraordinary endorsement of what an awful lot of hard-working people on your campuses have been doing.”

UW System President Kevin P. Reilly noted that the positive assessment of their college experience provided by these young alumni reaffirms the value that UW provides to the state, and should be more widely communicated.

Hartle also provided the Board with his perspectives on the current national landscape for higher education.

He noted that the Obama administration “believes more intuitively” than any other he can remember that higher education provides the best hope for economic progress, and it has invested significant funding into scientific research and student financial aid over the past two years. On the other hand, Hartle added, that strong interest in higher education also translates into more regulations.

“One of the risks for American colleges and universities is that we don’t appreciate the level of discontent and fear that the average American might be facing,” Hartle said.

The Board of Regents unanimously approved a recommendation for a 2% annual pay plan increase for UW’s faculty and academic staff for each year of the next biennium, as brought forward by UW System President Kevin Reilly.

Al Crist, Associate Vice President of Human Resources & Workforce Diversity for UW System, noted that the recommendation is “a keep-even request at best,” but is also mindful of the Competitive University Workforce Commission’s findings earlier this year that salaries for UW faculty and staff trail most of their peers.

Regent Michael Falbo, who was a member of the CUWC, reminded Regents that a significant part of the commission’s membership was drawn from Wisconsin’s business community and the commission unanimously supported efforts to address the salary gap. “I think they were greatly surprised at our lack of flexibility and lack of ability to reward people for performance,” Falbo said. “We need to do something.”

The UW System is required to submit a pay plan recommendation at this stage of the state’s biennial budget process.

In closed session, the Board approved the recommendation of Dr. Raymond Cross as the new Chancellor of UW Colleges and UW-Extension.  Since 1998, Cross has been President of Morrisville State College, a residential Agriculture and Technology College of the State University of New York (SUNY).