Veteran finds hope for her dog, others, in UW-Madison melanoma treatment study 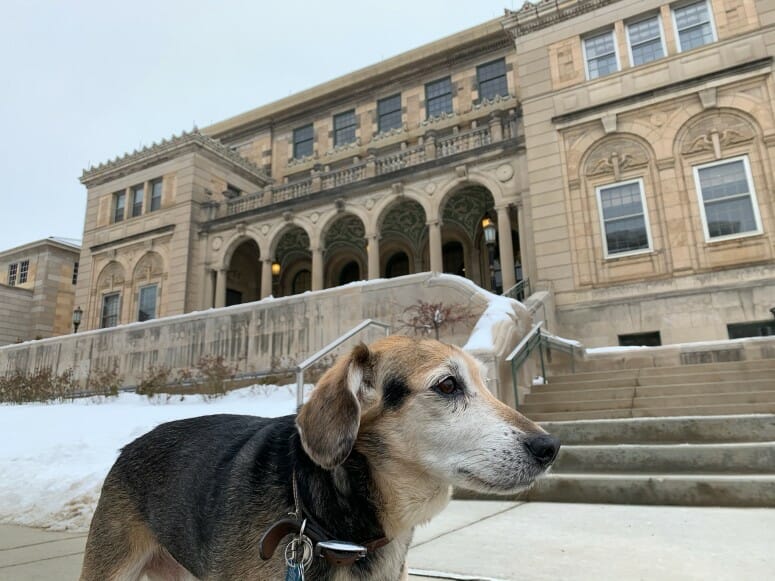 Chester, a 12-year-old beagle mix, is enrolled in a study funded by the Department of Veterans Affairs to evaluate a novel immunotherapy in dogs with melanoma. The study funds the canine clinical trials at UW Veterinary Care. PHOTO COURTESY OF BRITTNEY MAEHL

When Brittney Maehl, a veteran of the Navy, learned of the opportunity to help her dog Chester – and other cancer patients – through a clinical trial funded by the Department of Veterans Affairs, she was beyond excited.

“I thought I was counting down hours left with my lovely boy, but after our initial biopsy and exam at the vet school, I left with so much hope,” she recalls.

Chester, a 12-year-old beagle mix, was diagnosed with malignant melanoma in December 2020. As Maehl, a Fox Cities native, searched for answers and treatment options, she arrived at UW Veterinary Care at the recommendation of her local veterinarian. 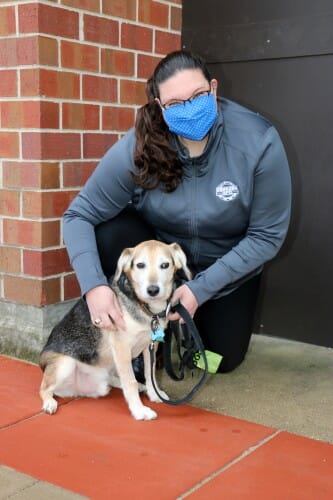 There, she learned of a study funded by the Department of Veterans Affairs (VA), which aims to treat canine melanoma with a new immunotherapy treatment and inform future human clinical trials.

“When I heard Chester was eligible for the Veterans Administration clinical trial, I broke into tears,” Maehl says. “Being a veteran, it meant so much more.”

Enrolling Chester in the trial felt like a chance to give the stoic beagle a fighting chance and benefit others battling cancer, including fellow veterans.

“The fact that he would not only be receiving some of the best, most advanced treatment options, he would be a part of something so much bigger for future fur friends, humans, and in support of my brothers and sisters in arms, our purpose was clear,” she says.

A common skin cancer in humans, malignant melanoma is particularly prevalent in veterans, especially those who served in the Middle East. This is because in people, melanoma is triggered by sun exposure. In dogs, the disease emerges as a common oral cancer.

The Department of Veterans Affairs is funding the canine clinical trials at UW Veterinary Care in tandem with a related study of the same investigational treatment in human melanoma patients. The goal is to learn more about treatment options and their potential side effects. The project is led by Mark Albertini, chief of oncology at the William S. Middleton Memorial Veterans Hospital and director of the Comprehensive Melanoma Clinic at the UW Carbone Cancer Center.

“The fact that (Chester) would not only be receiving some of the best, most advanced treatment options, he would be a part of something so much bigger for future fur friends, humans, and in support of my brothers and sisters in arms, our purpose was clear.”

Albertini and David Vail, a professor and oncologist at the UW School of Veterinary Medicine (SVM), have worked collaboratively for several years to identify new melanoma treatments. The SVM is a national leader in comparative oncology, studying naturally occurring cancers in pets as surrogates for human disease to advance mutually beneficial cancer therapies and diagnostics.

The VA-funded melanoma study involves two different treatment modalities. First, patients receive radiation therapy, which aids the immune system in recognizing the tumor as abnormal. Following this, patients get three injections of an immune stimulant called an immunocytokine. These injections consist of an antibody, which locates and targets tumor cells, and a cytokine (small proteins involved in cell signaling) called IL-2, which stimulates a positive immune response. 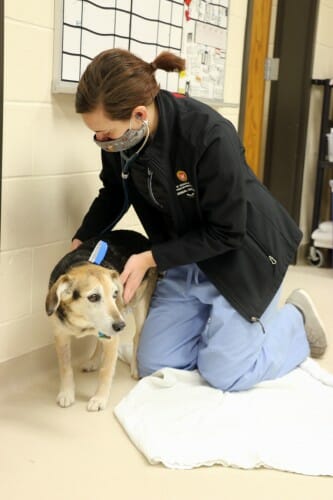 After receiving the injections, study participants are periodically monitored over the course of 60 days to check their tumor progression. Chester has completed all three injections, and at his last visit, his oral tumor – which before treatment covered most of his soft palate – measured significantly smaller. Clinicians have seen promising early results in other trial participants as well.

Following the treatment, Chester has had an improved appetite and has been more comfortable, active and playful.

Malignant melanoma frequently spreads to other parts of the body; in dogs, this spread is most often found in lymph nodes and the lungs. Unfortunately, according to Rachel McMahon DVM’19, a post-graduate intern with the hospital’s Oncology Service who has been treating Chester, this type of metastasis was seen at Chester’s most recent checkup.

“We were sad to find that Chester had developed new lung nodules that were consistent with metastases on his most recent chest radiographs,” she notes.

Thus far, the nodules have not affected Chester’s quality of life and he will continue to be monitored.

Maehl is grateful for any additional time spent with Chester, who she found as a stray in Chester County, Virginia (the inspiration behind his name) shortly after she transitioned out of the Navy.

Maehl spotted Chester on the side of the road in 2011, coaxed him to her with a Slim Jim she happened to have in the car, then took him to the veterinarian for an initial exam.

Though Maehl initially did not think she would have the ability to be Chester’s forever home, after seeing his love and gratitude following their first night together, she knew their fate was sealed. “He came running up to me and started licking my face non-stop in gratitude. From that day, he was mine. I just couldn’t give this precious, sweet boy up.”

The pair have been inseparable since. Maehl feels blessed to have found Chester, and that he is receiving treatment options that will benefit other dogs and veterans in the future.

“We are beyond blessed by all the hard work and care of the staff at UW–Madison’s veterinary school,” she says.

The UW School of Veterinary Medicine (SVM) is a leader in the field of research known as comparative oncology, advancing new cancer therapies and diagnostics that could benefit animals and people.

Past clinical studies in oncology at the SVM have yielded new immunotherapy drugs, chemotherapy and radiotherapy treatments with better effectiveness and less toxicity, and revolutionary new technologies. Read more.