Wisconsin’s effort to make a bigger sonic boom in the aviation and aerospace economy got a tremendous lift thanks to an initiative born with the vision and assistance of a University of Wisconsin Oshkosh program.

The landmark meeting of aviation and aerospace business executives, industry leaders and entrepreneurs from throughout Wisconsin was the first such gathering of its kind. It represents a new collaborative effort focused on strengthening the state’s position and future in the industry, throughout the nation and around the globe. 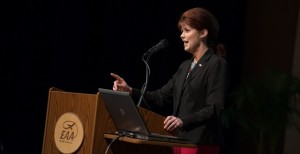 “Building this consortium is incredibly important to our state as we grow in this industry,” said Wisconsin Lt. Governor Rebecca Kleefisch, one of several state and regional leaders on hand to kick off the first meeting of the consortium.

“There are some who may not have considered our state a runway for aerospace success; that’s why it’s time to size up what we really have to offer, and take stock in the fact that Wisconsin is primed to grow this sector,” Kleefisch, who, in her role as Lt. Governor, serves on the Aerospace States Association (ASA), said in a statement heralding the Aerospace Consortium’s formation. “We see opportunity every summer in the Fox Valley when the EAA AirVenture takes place. We see this through AeroInnovate at UW Oshkosh.”

The new consortium will serve as an aviation and aerospace support system and entrepreneurial brain trust and power source – a collaborative group that, while comprised of many business competitors, is laser-focused on supercharging the cooperation between state companies eager to grow and share in the benefits of an expanded, Wisconsin foothold in the industry.

WEDC CEO Reed Hall assured the consortium members on March 29 that aviation would continue to be “an emphasis area we will always be concentrating on.”

Meridith Jaeger, co-founder and director of AeroInnovate, said the formation of the new consortium is one more example of the way her UW Oshkosh-launched organization has “been a catalyst for bringing attention to the assets Wisconsin has to offer the aviation and aerospace industry.”

“UW Oshkosh’s AeroInnovate has been a global leader in providing assistance to aviation and aerospace entrepreneurs and startups for the past five years,” Jaeger said. “Some of our best success stories are related startups right here in Wisconsin.”

AeroInnovate isn’t the only UW Oshkosh initiative that has taken wing. The University continues to work with local government partners in Oshkosh, including the city of Oshkosh, Winnebago County and the city’s industrial development corporation, CHAMCO Inc., to develop an aviation business accelerator. The innovative facility will be the anchor development within land acquired for an aviation industrial park expansion at Wittman Regional Airport, home to EAA and other growing general aviation and aviation-related businesses in the New North region.

UW Oshkosh Chancellor Richard Wells told the Aerospace Consortium members that the institution was deeply committed to expanding its forte for building and nurturing community and economic-development collaborations into the aviation and aerospace fields.

Wells also stressed UW Oshkosh’s hopes that the consortium would choose Oshkosh – the “epicenter for aviation and innovation” in Wisconsin – as its home base, given the global prominence and reputation of EAA and the pioneering efforts of initiatives such as AeroInnovate.

“We want to be the home host for this consortium,” Wells said.