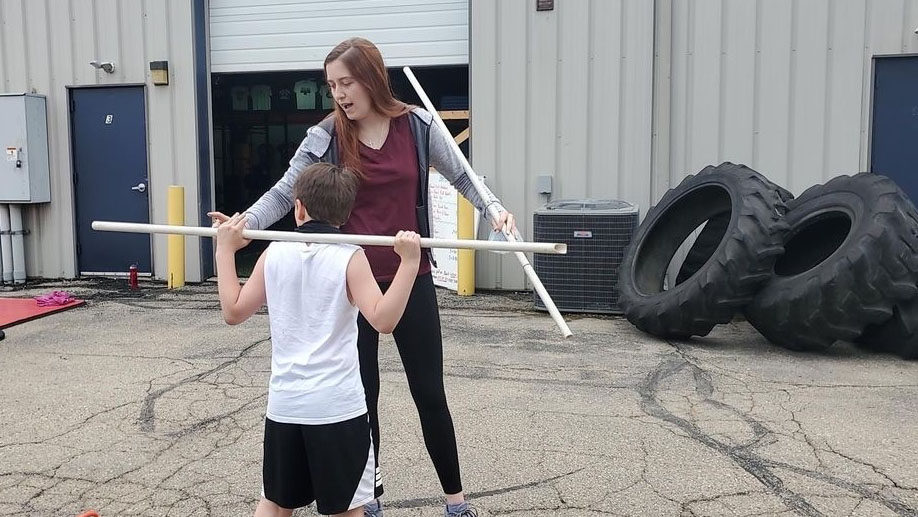 Roberts works with young athletes as an intern at Sports AdvantEdge in Verona.

Kinesiology senior Brianna Roberts’ enthusiasm for learning, growing, leading, researching, playing sports—basically everything the University of Wisconsin Oshkosh has to offer—bubbles over as she shares her journey. 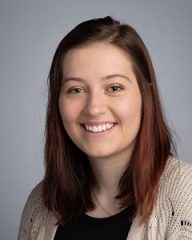 A sunny outlook and the tenacity to reach for opportunities at UW Oshkosh have transformed this first-generation college student from Beaver Dam into an accomplished McNair Scholar who graduates next week. She then heads straight to Baton Rouge to begin a master’s program this summer in athletic training at Louisiana State University on a full tuition scholarship.

After struggling a bit academically upon transferring from a small technical college in fall 2018, the turning point came as Roberts found her place (and her confidence) on campus.

“By getting involved in women’s rugby and group projects in kinesiology, she found her stride, ultimately applying to McNair and becoming one of our top scholars,” said Cordelia Bowlus, director of UWO’s federally funded McNair Scholars program that prepares high-achieving, first-generation students for graduate study.

“At first I felt like I just didn’t have the stuff … the intelligence,” Roberts explained. “The biggest difference now is my confidence. I’ve learned that I can ask questions and not be judged.” 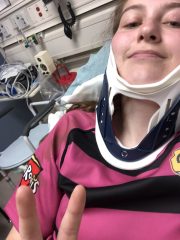 Suffering her own injuries has given Roberts perspective on healing.

Just as she found her footing, though, Roberts suffered a major concussion playing rugby in fall 2019, forcing her to sit out the rest of the season and spend January making up incompletes. But she quickly regrouped and came back strong in February 2020.

As part of her McNair program, Roberts teamed with her UWO adviser and faculty mentor Brian Wallace and fellow senior Jenna Hawk to develop a study focused on head trauma in sports.

“When I first met Brianna she was a little unsure of herself,” Wallace said. “However, her confidence has increased greatly over the past year and a half due to her many accomplishments with the McNair program, winning several competitive research presentation awards, actually completing the research project and being admitted into her dream graduate program.”

In the 2020 McNair spring seminar, Roberts stood out to Bowlus as an engaged learner and a kind and supportive classmate.

“She was conscientious, always arriving early for the seminars. I looked forward to seeing her bright smile and chatting with her as others trickled into the classroom,” Bowlus said.

Then the pandemic hit, ending in-person classes and forcing Roberts and the other student scholars to rethink their research project plans.

Instead of studying the forces applied to helmets during head collisions with human subjects playing football, Roberts and her research team switched the focus to linear drop tests, essentially collisions between the helmet and the ground. Roberts and Hawk recently presented their results at UWO’s Celebration of Scholarship.

“Specific to the research project, Brianna consistently performed above expectations during each step of the process. Her work was always done well and showed a lot of thought and commitment,” Wallace said. “I demand a lot of students who I work with on research projects, and her commitment while balancing other school and out-of-school responsibilities was impressive.”

The pandemic impacted other aspects of Roberts’ life as well.

“As weeks passed into months, the end of the pandemic was nowhere in sight. This reality was especially hard for someone who is used to finding relief from stress in team sports, so I watched with great pleasure as Brianna began to see her cohort as her team,” Bowlus said. “I was the coach, and she was the captain, staying positive for the sake of the group.”

Roberts thrives as part of a team.

“I like the support everyone gives each other as we work through conflicts. I like being exposed to different life experiences and developing cultural awareness,” she said. 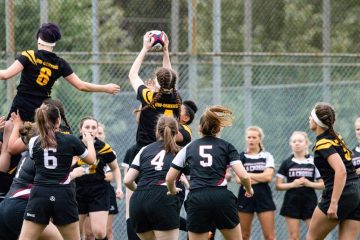 Roberts catches a line out while playing rugby for the Titans.

On to graduate school

With graduation just days away, Roberts is ready to take all she has learned on and off the field with her to LSU for the next step in her journey to becoming an athletic trainer.