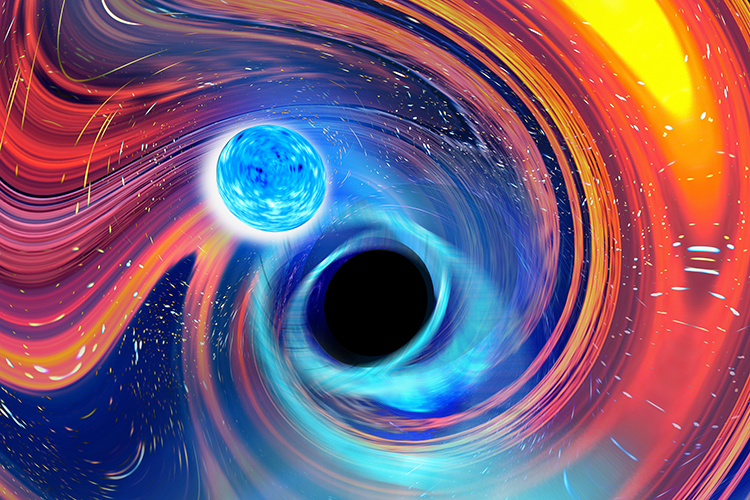 This artist’s interpretation shows a merger of a black hole and neutron star. The neutron star is in blue, with the rainbow colors representing pieces of the neutron star being torn off by the black hole. In these discoveries, however, the black holes likely swallowed their neutron stars whole because no light was detected in either event. (Illustration by Carl Know, OzGrav, Swinburne University)

For the first time, researchers have confirmed the detection of a collision between a black hole and a neutron star. In fact, the scientists detected not one but two such events occurring just 10 days apart in January 2020.

The extreme events made splashes in space that sent gravitational waves rippling across at least 900 million light-years to reach Earth. In each case, the neutron star was likely swallowed whole by its black hole partner.

The discovery was made by an international team of scientists that includes 22 members of UWM’s Center for Gravitation, Cosmology and Astrophysics.

In this new study, scientists have announced the detection of gravitational waves from two rare events, each involving the collision of a black hole and a neutron star. The gravitational waves were detected by the National Science Foundation’s Laser Interferometer Gravitational-Wave Observatory (LIGO) in the United States and by the Virgo detector in Italy.

Astronomers have spent decades searching for neutron stars orbiting black holes in the Milky Way, our home galaxy, but have found none before 2020, said Jolien Creighton, UWM professor of physics who led the group in the LIGO Scientific Collaboration that found the event. “It wasn’t clear if such binaries existed at all,” Creighton said.

With this new discovery, “we can finally begin to understand how many of these systems exist, how often they merge, and why we have not yet seen examples in the Milky Way,” said Astrid Lamberts, a researcher at Observatoire de la Côte d’Azur, in Nice, France. Lamberts is a former postdoctoral researcher at UWM’s Center for Gravitation, Cosmology and Astrophysics.

The first of the two events, GW200105, was observed by the LIGO Livingston and Virgo detectors. The other LIGO detector, located in Hanford, Washington, was temporarily offline. Given the nature of the gravitational waves, the team inferred that the signal was caused by a black hole colliding with a 1.9-solar-mass compact object, later identified as a neutron star. This merger took place 900 million light-years away.

Because the signal was strong in only one detector, the location of the merger on the sky remains uncertain, lying somewhere in an area that is 34,000 times the size of a full moon.

The second event, GW200115, was detected by both LIGO detectors and the Virgo detector. GW200115 comes from the merger of a black hole with a 1.5-solar mass neutron star that took place roughly 1 billion light-years from Earth in an area that is almost 3,000 times the size of a full moon.

“Both are very large swaths of the sky by astronomical standards,” said Patrick Brady, UWM professor of physics and spokesperson for the LIGO Scientific Collaboration. “But the area on the sky where we think GW200115 happened is one-tenth the size of the area in which we think GW200105 happened.”

Astronomers were alerted to both events soon after they were detected in gravitational waves and subsequently searched the skies for associated flashes of light. None were found. This is not surprising due to the very large distance to these mergers, which means that any light coming from them, no matter what the wavelength, would be very dim and hard to detect with even the most powerful telescopes. Additionally, the mergers likely did not give off a light show in any case because their black holes were big enough that they swallowed the neutron stars whole.

“These were not events where the black holes munched on the neutron stars like the Cookie Monster and flung bits and pieces about. That ‘flinging about’ is what would produce light, and we don’t think that happened in these cases,” Brady said.

In addition to Brady and Creighton, 20 others at UWM took part in the discovery. Postdoctoral researcher Soichiro Morisaki was a key contributor in analyzing the data to determine the properties of the system, such as the masses of the two bodies.

Two UWM graduate students, Anarya Ray and Vinaya Valsan, worked out how frequently such systems merge in the universe.

Having confidently observed two examples of gravitational waves from black holes merging with neutron stars, researchers now estimate that, within one billion light-years of Earth, roughly one such merger happens per month.

“The detector groups at LIGO, Virgo, and KAGRA are improving their detectors in preparation for the next observing run, scheduled to begin in summer 2022,” Brady said. “With the improved sensitivity, we hope to detect merger waves up to once per day and to better measure the properties of black holes and super-dense matter that makes up neutron stars.”