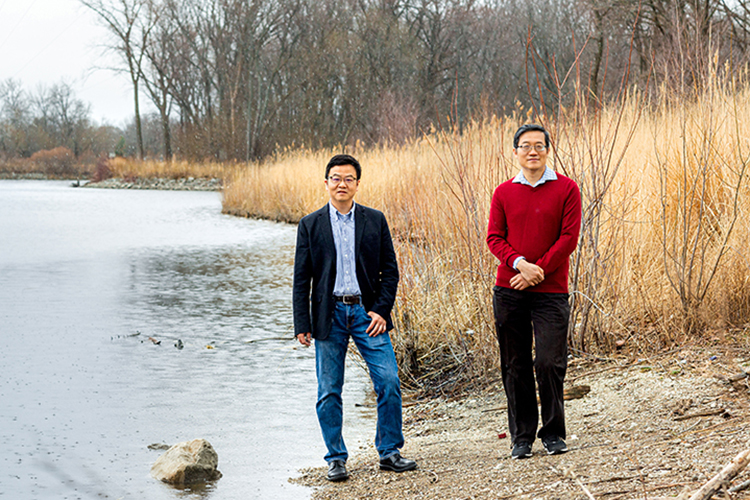 Qian Liao (left), associate professor of civil engineering, and Changshan Wu, professor of geography, collaborated on a study of the Milwaukee River watershed to determine whether more beaver dams could reduce urban flooding in some areas. (UWM Photo/Elora Hennessey)

When water rises in the 900-square-mile Milwaukee River watershed, it rushes downstream to the city at the basin’s lower end. With the rise in severe storms driven by climate change, urban flooding is the costly result.

A new study by two UWM researchers shows that restoration of an animal that Wisconsin was known for 300 years ago – beavers – could be a part of the solution.

Enough of the dam-building animals living in the right spots along creeks and streams can alleviate flooding in some of Milwaukee County’s worst-struck areas, according to research by Qian Liao, an associate professor of civil engineering, and Changshan Wu, a professor of geography.

When beavers build homes, called lodges, in wetland habitats, they also construct dams to create a pond so that they can enter the lodge from under water. A significant amount of water backs up as the pond forms, and that hinders fast-moving water, which has a cumulative effect downstream. 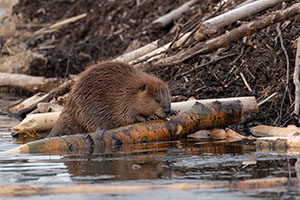 “If there are hundreds of beaver dams distributed across the entire watershed, you have many locations where you can reduce the water flow,” Liao said. “And not just the volume, but also the timing, so that the combined delay at each dam has a significant impact on the downstream peak flow.”

Bob Boucher, founder of the environmental advocacy organization Milwaukee Riverkeeper, proposed the study to officials at the Milwaukee Metropolitan Sewerage District, which funded the research.

The researchers were asked to investigate several questions: How much flooding could dams from a healthy beaver population abate? How many dams would be necessary, and where should they be? Does the watershed have the right habitat to support a beefed-up beaver population?

To begin, Boucher, two undergraduates from Wu’s lab, and Leah Holloway from Milwaukee Riverkeeper conducted fieldwork to determine the beaver population capacity and identify locations where beaver would have the best chance at surviving. 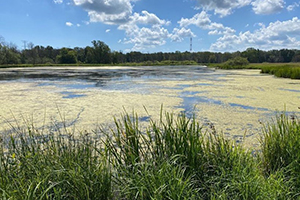 Jackson Marsh was one field assessment location ranked as high for its likelihood of supporting beaver restoration. (Photo courtesy of Bob Boucher)

Liao and Wu provided the fieldworkers with maps that showed the existing wetland areas throughout the subdivided watershed. The maps were on a geographic information system (GIS) platform that allowed the field workers to record multiple spatial features of each area and then view all added variables at once.

“It was like having a drone view,” Boucher said.

Collecting data with their cellphones, Boucher, Holloway and students Max Rock and Madeline Flanner spent much of 2020 visiting 163 locations on the GIS maps. They made observations either by canoe or by hiking into areas at bridge road crossings to evaluate whether locations had ample food sources and the kinds of trees the animals use for building.

A cellphone app that Rock developed helped the team rank the locations by quality, based on all the data. What they found was enough habitat to support around 4,500 beavers – or about one family for each 100 acres of wetlands.

For the next step, Liao and graduate student Syeda Mahmuda Noor used the top sites identified from the fieldwork and modeled the effects of dams in those areas during high-water rain events. He built his hydrological model using 10 years of data on rain events and stream flows from National Oceanic and Atmospheric Administration and the U.S. Geological Survey for validation. 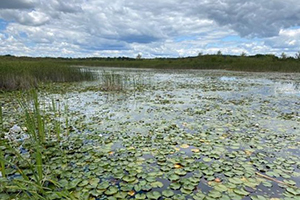 Mud Lake in the Cedarburg Bog, near Saukville, was another location where conditions were right to attract beavers, including the presence of water lilies, part of the animal’s diet. (Photo courtesy of Bob Boucher)

“We ran the model and found that individual rain event data would accurately reproduce the past river flow observations recorded at the USGS river stations,” he said. “Then we added the hypothetical dams at the locations deemed to be best and ran the model again.”

Liao fed the model different scenarios of beaver dam activity at 52 locations that would provide the highest potential to reduce downstream flooding, while also having ideal conditions for beaver. According to the model, dams would reduce the peak flow by between 14% to 48%, depending on the details of the storm, but also on the dam location.

“For example, if the storm was relatively uniform across the entire watershed, then you would have the highest reduction of water flow,” he said. “But if the storm dropped most of its rain on southern areas of the river watershed, then dams located upstream where there’s less rain will have a diminished effect.”

An area of the river that lies just north of West Bend is particularly well-suited, said Boucher, and able to support close to 100 beaver dams.

That’s great news for three areas in Milwaukee County that are designated as flood zones by the Federal Emergency Management Agency – Thiensville, Brown Deer and Glendale.

“There have been other studies that showed the effect on flooding of introducing beaver dams, but those studies only measured the effect a few miles downstream,” Liao said. “What we did is a little different. We looked at it on the watershed scale.”

The study shows how the idea could be repeated to be one of the tools to address urban flooding across the Great Lakes region, added Boucher.

And benefits would not be limited to the FEMA flood zones, he added. “Thousands of road culverts that lie across the area could last twice as long if flooding were reduced. This would add resiliency to the whole system.”