UWM research: What the mechanical forces behind protein folding can tell us about metastatic cancer 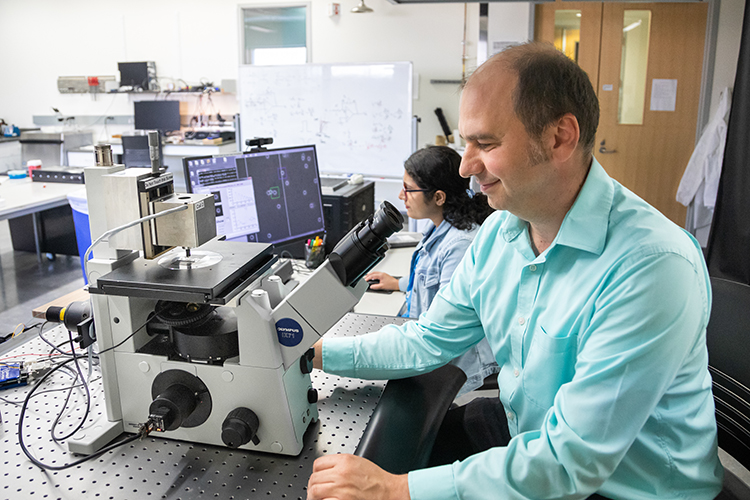 Ionel Popa, UWM professor of physics, demonstrates the magnetic tweezers built by his lab members to measure the mechanical forces that act on proteins as they fold and refold. Proteins are large molecules that carry out the body’s functions required for good health. In back is research assistant Sabita Sharma. (UWM Photo/Elora Hennessey)

Talin is a protein that controls cellular attachment and movement, but its malfunctioning also allows cancer cells to spread. DCL1 is a tumor-suppressing protein. But scientists don’t fully understand how either protein works – or what happens when they don’t work the way they should.

One thing scientists do know: When it is present in a cell, DCL1 can interact with talin and perhaps interfere with talin’s ability to group cells together. If scientists knew the exact steps in the process, they may be able to identify a treatment option to keep cancer from metastasizing.

To find answers, a team of researchers from the University of Wisconsin-Milwaukee used a unique tool that they built to apply the exact mechanical forces that act on talin in the body, beginning a process called protein unfolding that is necessary for the protein to perform its function.

With the tool, called “single molecule magnetic tweezers,” the scientists measured intracellular mechanical forces and experimented with them in the lab so that they can find what happens to talin when DCL1 is both present and not present in the cell.

They have discovered a unique behavior of talin, induced by mechanical forces, that demonstrates a strong interaction that can explain the antitumor effect of DLC1 when the two proteins bind.

“We still don’t know exactly what goes wrong with talin functioning when cancer cells metastasize,” said Ionel Popa, a UWM physics professor who led the team. “But it looks like talin plays a role in activating the spread of cells when the tumor-suppressing DCL1 is missing. And when DCL1 binds to talin, it appears to block talin from activating cell spreading.”

The work is published today in the journal Science Advances.

Like all proteins, talin forms a specific three-dimensional shape that defines its function. Known as protein folding, it is one of the most complex processes in nature and, when folding goes awry, it often leads to disease. Popa’s lab investigates forces affecting protein folding, which can lead to new treatments for diseases that start when proteins misfold.

“The process is like a mechanical computer because it calculates how much force is needed for all the connections to happen,” Popa said. “These forces tell the cell what’s going on around it.”

The cell produces various ligands, which convert mechanical forces to chemical signals when they bind to a protein. And the mechanical fine-tuning by these ligands, including DCL1, are what made the researchers so interested in talin to begin with.

The location, or domain, where DCL1 binds with talin has the highest number of ligands available among all binding stations on the protein. In fact, messaging goes on both inside and outside the cell as ligands help orchestrate the task. Correlating and measuring the force mechanism of the folding has allowed the researchers to study this process in further detail.

How the tweezers can ‘see’

Scientists already knew that DCL1 binds at only one particular domain on the talin protein. The UWM researchers revealed how: In response to an applied force, talin unfolds and refolds, forming a structure where DCL1 binds almost irreversibly.

“We gathered the data from the talin molecule as it unfolded and refolded, and then added DCL1 to see how it changed,” Popa said. “Previous research indicated a weak interaction, suggesting it’s probably not the driver of DCL1’s suppressor abilities. But when we tested it, we found the opposite – the resulting molecule becomes super-stable.”

The magnetic tweezers allowed the researchers to make measurements on a protein molecule only a few nanometers in size. After tethering it between a glass surface and a paramagnetic bead, the researchers measure the position of the paramagnetic bead at a freely moving end of the molecule, and that of a nonmagnetic bead, glued to the same surface as the opposite end of the protein. Then they apply a magnetic force, replicating the exact mechanical perturbations that a protein experiences in the body, and measure its unfolding and refolding to understand how its structure changes.

With the magnetic tweezers the researchers can investigate the effect of those forces over days rather than minutes, similar to their timelines in the body.

The role of hormones

The activation of talin during cell-spreading and tissue-building is controlled by hormones. In this stage, the protein undergoes cycles of stretching and binding with other proteins. Mechanical forces from both within the cell and outside of it come into play as more proteins join the process.

For talin to be activated, it must be brought to the cell membrane by messengers that signal from the cell cytoskeleton to the extracellular matrix, the surrounding environment that cells are embedded in.

Popa’s team tracked the effect of DCL1 in this process.

“During this hormone-driven ‘inside-out’ activation, if DLC1 also binds to talin, it will not allow for that recruitment to the membrane,” he said. “Any of the steps controlling cell spreading might be highjacked by cancer cells to become metastatic. In some cases, DLC1 is completely suppressed.”

Missing or malfunctioning DCL1 may not be the only factor in cancer spread, Popa said. But the work illustrates the alternate behaviors of proteins under force and points to a direction for further study for this protein interaction as a potential target for cancer drugs.

Co-authors on the paper include members of the Popa lab: Narayan Dahal, Sabita Sharma, Binh Phan and Annie Eis. This work is dedicated to Eis, a research specialist, who recently passed away.