Affirmation comes in many forms. For Remi Larson, a graduate student in school psychology at University of Wisconsin-Whitewater, it came when the fourth grader she was working with called out to his teacher, “Come here! Come here!” to show off the plus marks and a graph that told the story of his success. Larson watched the scene virtually, from her laptop, at the end of a 30-minute session working with the student.

Larson, from Oconomowoc, is one of 12 graduate students in her school psychology cohort who just wrapped up six weeks of virtual one-on-one sessions, called “interventions” in school psychology, with third and fourth graders at Washington Elementary School in Whitewater to bolster the children’s math and reading skills. 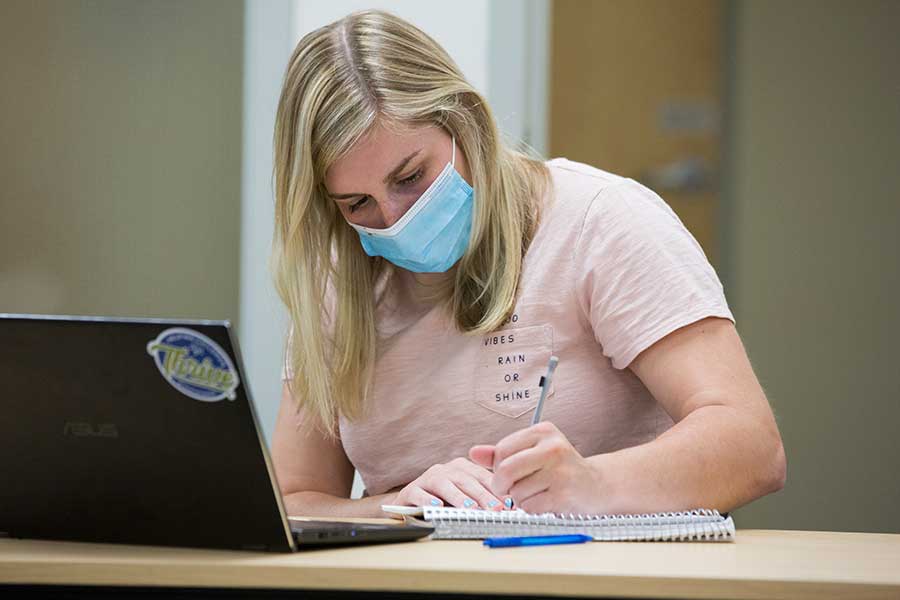 Remi Larson in class at Laurentide Hall on April 27, 2021, at UW-Whitewater.

Sandra Ramirez, an English language learners (ELL) instructor at Washington Elementary School, said she notices more elementary students than usual who need help since returning to school from virtual learning. Ramirez teaches ELL students and serves as the conduit between the grade school students, their teachers and the UW-Whitewater graduate students.

When the COVID-19 pandemic hit in spring 2020, in-person classes were paused during the time third graders normally focus on fluency in math facts. Although in-person classes have resumed, the schools still are limiting access to volunteers and others.

“Some of them (students) were not engaging virtually, and now that we’re face to face again, we’re seeing they need extra help,” said Ramirez.

“The partnership with the university has helped us continue to serve students who need the service, especially in math fluency and reading fluency,” she said.

In January, Ramirez asked Spanish program volunteers from the UW-Whitewater Department of Languages and Literatures to help a group of fourth-grade students who were learning English as a second language. When that was successful, Ramirez invited the school psychology students to assist with math and reading by meeting virtually with individual students for the final six weeks of the semester.

Ramirez and Christine Neddenriep, a professor of psychology at UW-Whitewater, say both the elementary students and graduate students have benefited from the contact.

“It’s been so beneficial to our students because the authentic experiences are so essential to their training,” said Neddenriep. “As well as relationship-building, students tackle the questions of how to establish rapport with a child and how do you motivate them and how do you engage them and continue to keep them engaged, especially virtually? That has been such a challenge for our students and for educators in general.” 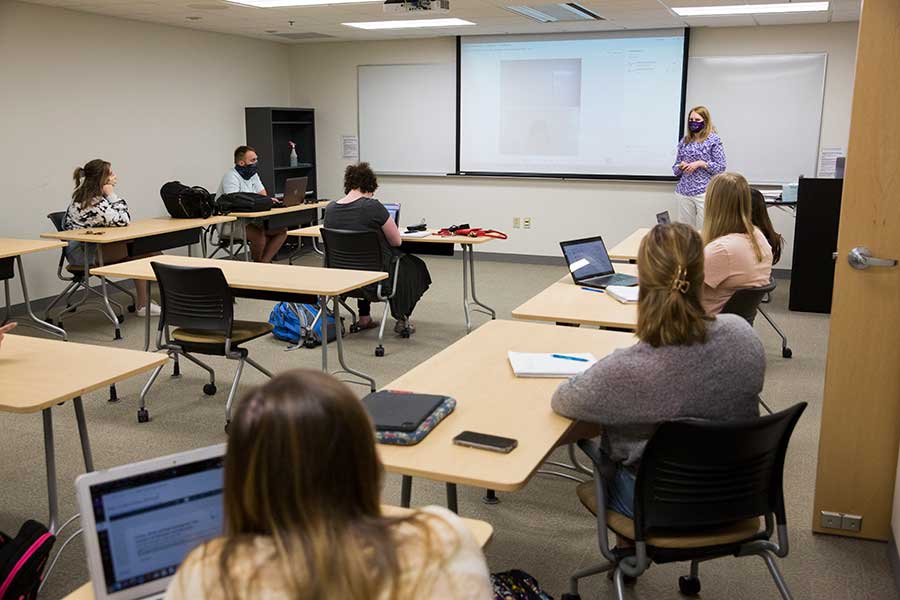 UW-Whitewater Professor of Psychology Christine Neddenriep lectures in class with a cohort of school psychology graduate students on April 27, 2021.

Larson and her classmate Liv Russo, a school psychology graduate student from McFarland, faced challenges in the first sessions with their students, but their training helped them find what the students needed.

“It’s harder (virtually) to read those important cues you rely on — like body language and facial features — because the students do wear masks when they’re in school,” said Russo. “But my student has a million things to tell me every week. It would be a happy experience to see them in person someday.”

On one of the last of their sessions in late April, Larson and Russo connected with their students from one of the best study nooks on campus, just off the third-floor lobby of Laurentide Hall. They came to UW-Whitewater on different paths, but are alike in their commitment to advocate for students. 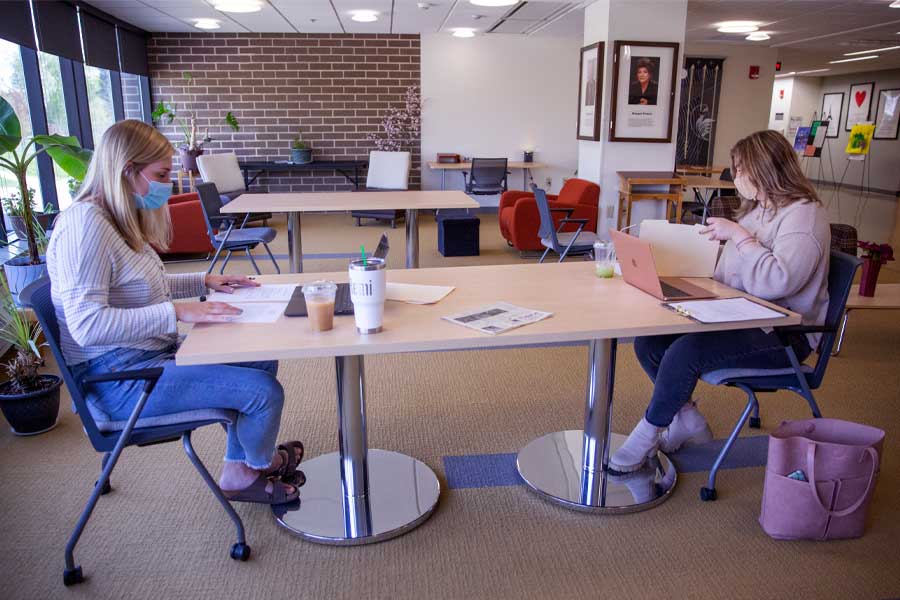 Russo, who double-majored in education and psychology at UW-Madison as an undergraduate, applied to 10 graduate programs, but the quality, size and affordability of UW-Whitewater’s program stood out. She said graduates of the program gave her positive feedback about finding jobs and feeling significantly better prepared. Both Russo and Larson received graduate assistantships in the Department of Psychology to help pay school costs.

As an undergraduate at UW-La Crosse, Larson majored in psychology with a criminal justice minor. Looking for the right fit for a career, she attended a school psychology career event on campus during her junior year. Like Russo, she chose UW-Whitewater after talking with third-year students in the program and meeting faculty like Neddenriep.

Promoting academic success is a primary emphasis of school psychologists, according to Neddenriep.

“When kids are successful academically, you know that they’re likely also healthier emotionally and behaviorally,” said Neddenriep. “You see a lot of behavioral challenges when kids aren’t succeeding academically and when academics are frustrating.”

Neddenriep said school psychologists are trained and mandated by law to identify learning, intellectual and behavioral disabilities through assessments and testing. In fact, the academic interventions school psychologists do in partnership with classroom teachers can be enough to keep students from needing specialized services.

“It’s nice when we can do work like this preventatively, to address problems rather than diagnosing disabilities after the fact,” she said.

Ramirez said the bonds with the graduate students also gave the elementary students a morale boost during the pandemic.

“They love to meet with the graduate students,” said Ramirez in April. “They feel special knowing that ‘there’s this one person for me on the screen and just for me.’ The kids feel that’s a moment for them. They don’t want to miss it.”