They’re proud of creating jobs while building a business that helps the environment by diverting bulky mattresses from state landfills.  They disassemble mattresses and box springs and salvage the wood, metal, foam and cotton components that can be sold and recycled.

Owner Bob Mudler, a 1997 graduate of UW-Whitewater, caught the entrepreneurial spirit while working as a salesman for waste and recycling businesses. About four years ago, he formed Total Waste Solutions, a consulting company that he continues to own and operate.

Clients kept asking him about recycling mattresses.  He had no good answers.

He came up with a business plan for Midwest Mattress Recovery, which opened its doors in March and has recycled nearly 13,000 mattresses while serving clients ranging from local governments to hotels to junk collectors.

Mudler is proud of building a business while also protecting the environment.

“We are helping preserve our landfill space, which is very important in the state of Wisconsin,’’ he said.  “We are a for-profit company and right now we’re holding our own.”

Mudler shared his idea with another Warhawk, Kyle Kopplin, during early-morning basketball games in Watertown.  Kopplin, who graduated in 2008 with a major in speech and a minor in marketing, joined the business.  He’s now the plant manager, a job that entails everything from scheduling to training to driving trucks.

As Mudler worked on a business plan that eventually won a Small Business Administration loan, he sought help from his father, Dennis Mudler, a 1970 graduate of UW-Whitewater’s College of Business and Economics.

The elder Mudler had retired after a 30-year career as business manager for the Watertown public schools.  He had a few questions for his son.

“He was very supportive, but he asked me a lot of the hard questions that I needed to answer before I opened the door,’’ Bob Mudler said. “His skill set was much needed to help get us off the ground.”

Mudler is especially grateful to the city of Watertown, which kept its promise to become his first customer when the business opened its doors. Other clients include the city of Madison, Waukesha and Outagamie counties, and several universities and motels throughout the Great Lakes region.

Mudler majored in speech and communication at UW-Whitewater, gaining public speaking skills that serve him well as he promotes his business and the value of recycling to potential clients and the public.

His Warhawk education “helped me become a very outgoing person,’’ he said.  “I have to do a lot of public speaking.  I have to run a business, run a team.”

He looks forward to expanding his business.

“It’s kind of neat,’’ Mudler said.  “It’s three different generations of UW-Whitewater graduates helping get this business off the ground.” 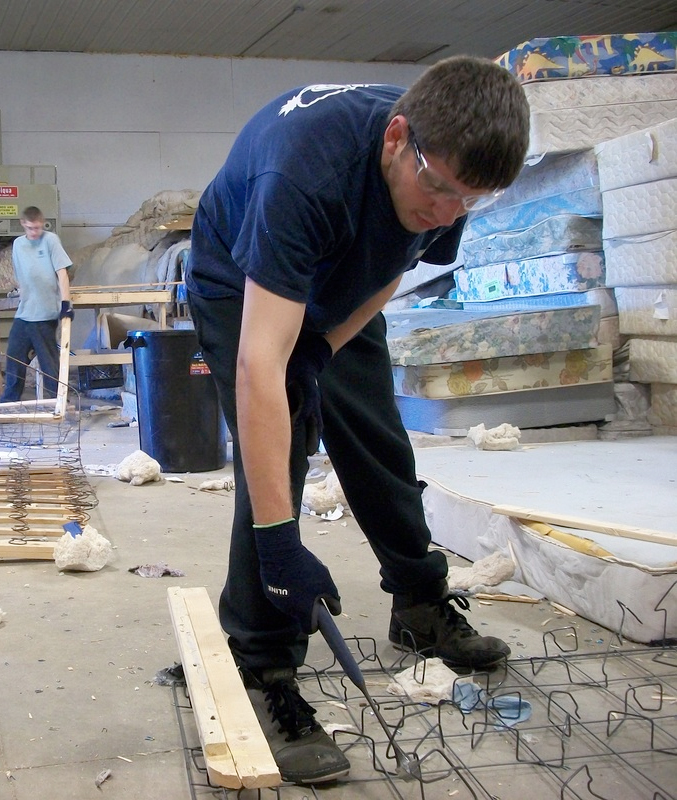 Employees at Midwest Mattress Recovery in Watertown are able to dismantle about four mattresses per hour.