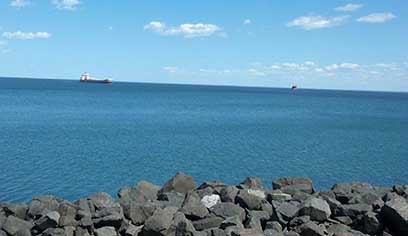 The University of Wisconsin-Superior’s Lake Superior Research Institute (LSRI) recently received a five-year cooperative agreement and funding for the first year at a level of $7,965,000 from the United States Department of Transportation Maritime Administration.

“LSRI’s GWRC is a program devoted to objective, third-party research to support sustainable industrial, commercial and public use of the nation’s Great Waters, particularly via green shipping,” said Dr. Matthew TenEyck, LSRI director. “The primary focus of the GWRC is on preventing new ballast water introductions of invasive species in the Great Lakes and other Great Waters.”

MARAD and LSRI’s GWRC have developed a successful and impactful partnership over the past decade. This partnership has included: detailed scientific investigations of commercial vessel ballast water as sources of aquatic invasive species and innovations to prevent species introductions; testing method development and independent, third-party evaluations of ballast water management systems, and associated sensor technologies. This relationship recently resulted in the development of a seven-year R&D Plan, approved by the EPA Office of Water, that supports the goals of VIDA and GLLCISP.

The LSRI, located on the UW-Superior campus, was created in 1967 and formally recognized by the University of Wisconsin’s Board of Regents in 1969. LSRI’s mission is to conduct environmental research and provide services that directly benefit the people, industries and natural resources of the Upper Midwest, the Great Lakes Region and beyond. The LSRI also operates the Montreal Pier Testing Facility located at 22 19th Ave. E. on Montreal Pier in Superior. The one-of-a-kind Great Lakes facility allows the research and development of ballast water treatment technologies.