When it comes to finding small plastic particles in the Great Lakes, nobody does it better than Dr. Lorena Rios-Mendoza.

It’s a job she is passionate about, because the quality of the water and fish species depends on it.  “I like it because it’s something we can show the community, that we need to be careful with the plastics,” said Rios.  “We need to work together to say plastic is bad, just recycle and reuse.  We have no idea how long some of these plastics stay in the ocean — (it) could be more than 40 years.”

The amount of plastic debris increases every day and degrades so slowly that it effectively never disappears; it is only dispersed.

The UW-Superior assistant professor of chemistry is getting local, regional, national and international attention due to the unique research that she and her team are doing.

She first started her research back in 2003 at the University of the Pacific working with support of the Algalita Marine Research Foundation in Long Beach, California, where she looked into macro and micro plastic debris in the Pacific Ocean.  When she joined the UW-Superior staff in 2010, she decided to take a closer look into plastics and the water quality in Lake Superior and started doing her scientific research into that subject in 2011. 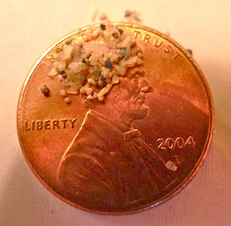 Microplastics in the Great Lakes may be harming wildlife.

The tiny plastics being found now are so small that they are getting through waste treatment plants and eventually find their way into the Great Lakes.  Researchers are finding very large pieces of plastic and other dangerous debris in the water as well.

Rios is working with 5 Gyres Institute, a Los Angeles-based nonprofit group, and together they conducted research in August 2013 on  Lake Michigan, Lake Huron and Lake Erie.

Last year, Rios and her team collected data aboard the U.S. Brig Niagara, a wood sailboat, where she was not only a researcher and scientist, but also a member of the ship’s sailing team and assisted with chores.  They collected samples from Lake Superior, Lake Huron, and Lake Erie.  Rios worked with Sherri Mason, a chemist with State University of New York-Fredonia.  Rios said she found more microplastic debris in the ocean by weight compared to Lake Erie, but there was greater quantity in a condensed form in Lake Erie.

Rios plans to work with high school teachers around the country to give them insight into her microplastics research work along the Great Lakes.

Rios said it is very important that we find alternatives to plastics that don’t harm the water or aquatic organisms such as fish. Education is the key, she said. She suggests the four R’s: reuse, recycle, reduce, and refuse plastic.

She says she doesn’t want to hinder the plastic manufacturing industry, but just wants to work to find alternatives that are safer for the environment.

“We want to find evidence, so we can show those that are in power that plastic is a dangerous pollutant, and maybe we need to change our use of plastics,” Rios said.

Changing consumer habits would be the easiest and cheapest way to make an impact right away, she said. In a presentation before the American Chemical Society in New Orleans in April, Rios said microplastics create significant risks to the ocean and now to the Great Lakes environment because of the known potential of these microplastics to absorb persistent organic pollutants that can harm aquatic organisms.

Several UW-Superior students work with Dr. Rio, doing hands-on research and getting an opportunity to present their findings at undergraduate conferences.

Further research is necessary to determine the magnitude of this problem and the impact it has on society, Rios said.  Sampling of the waters and shores of the Great Lakes in search of plastic debris will continue. 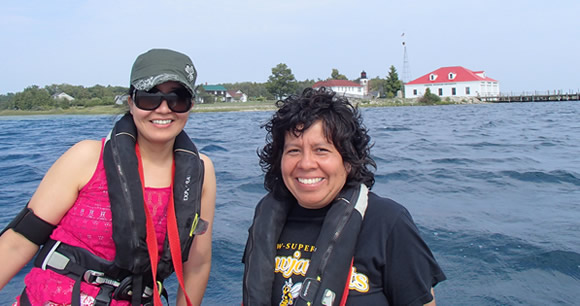