UW-Stout’s Hospitality Leadership school ranked No. 10 in the world 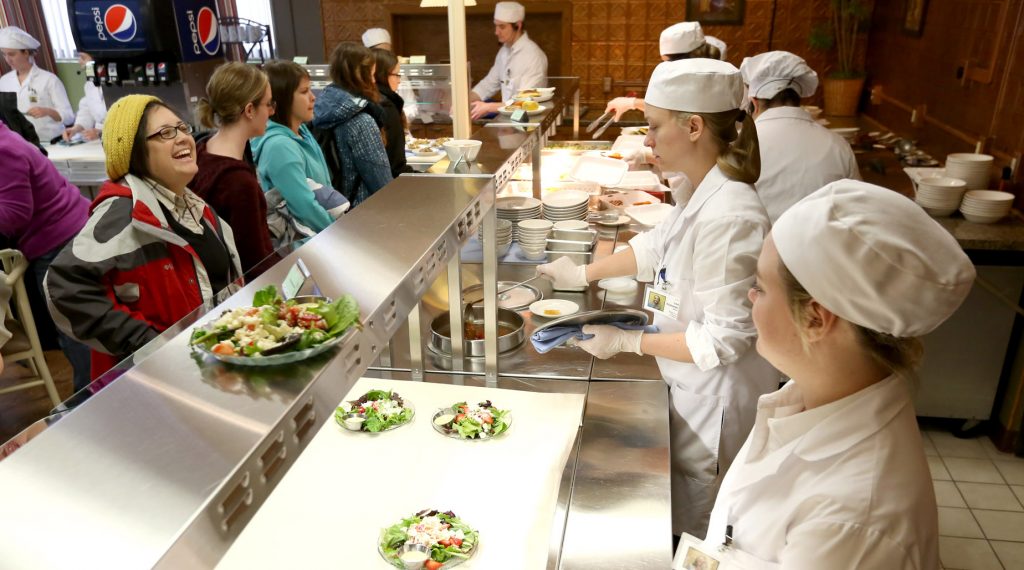 UW-Stout students serve food at a campus café as part of the Quantity Food Production class. The university’s School of Hospitality Leadership has been ranked No. 10 in the world by CEOWorld magazine.

The School of Hospitality Leadership at University of Wisconsin-Stout is in exclusive company.

The school has been ranked No. 10 in the world on the list of the 50 best hospitality and hotel management schools by CEOWorld magazine of New York. The 2015 rankings were released the week of April 4, 2016.

The magazine considered 300 schools worldwide for the ranking and surveyed more than 18,000 hospitality recruiters and senior managers of luxury hotels worldwide.

Three of the top 10 schools were from Switzerland and the other seven from the U.S., giving UW-Stout the No. 7 U.S. ranking.

Cornell University was ranked No. 1, followed by the University of Nevada-Las Vegas and Michigan State.

CEOWorld is a business and technology magazine for high-level executives, according to its website.

“As we approach our 50 years of hospitality education, we are honored to receive this distinguished recognition,” said Kristal Gerdes, director of the school. “It underscores the fact that our students are recognized as leaders in a global hospitality industry.

In 2015, the School of Hospitality Leadership was ranked fifth best in the U.S. by the Successful Student website.

The school, which has an employment rate of 99 percent for recent graduates, offers three undergraduate majors: golf enterprise management; hotel, restaurant and tourism management; and real estate property management. A master’s degree program in hospitality strategy will be offered in 2017.

UW-Stout is celebrating its 125th anniversary.