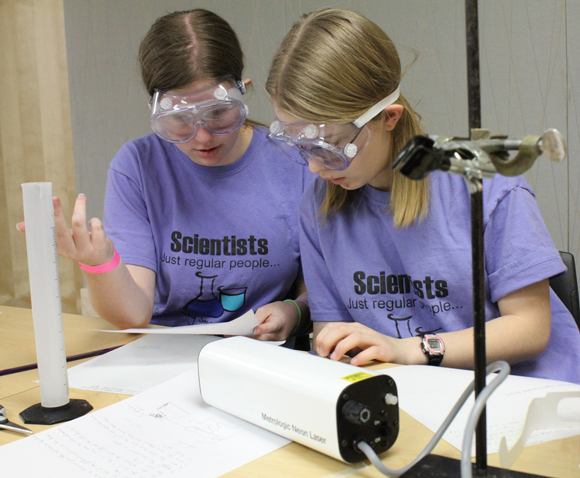 Students work on a problem during a recent state Science Olympiad at UW-Stout. The state meet returns to campus April 1-2, followed by the national meet May 18-21.

An event that bills itself as the Nation’s Most Exciting K-12 Science Competition came to UW-Stout twice in seven weeks, first featuring students from around the state and then from around the nation.

The state Science Olympiad, for high school and middle school teams, was held April 1-2. Approximately 1,500 student competitors were expected, including from 43 high schools and 29 middle schools.

The national Science Olympiad was held May 18-21, on campus. It featured 120 teams from all 50 states, 2,400 competitors and several thousand more coaches, family members, friends and spectators.

The director of both events is UW-Stout’s Forrest Schultz, a professor and chair of the department of chemistry and physics.

The competitions, especially the national, will have a significant economic impact on the region, Schultz said. UW-Stout has hosted the state tournament about a half-dozen times since 2001, including in 2014.

This was UW-Stout’s first time hosting the national meet, which is in its 32nd year. The 2015 meet was at the University of Nebraska in Lincoln, Neb., and the 2014 meet in Orlando.

Teams in the state meet were attempting to qualify for the national meet.

Friday’s events kicked off with a STEM Expo for students, featuring presentations by numerous faculty members, from 8 a.m. to 4:30 p.m. on campus and at the Mabel Tainter Center for the Arts.

An opening ceremony was held from 6 to 8 p.m. in Johnson Fieldhouse, including a parade of schools. The speaker will be Nels Paulson, an associate professor of social science at UW-Stout. His talk was titled “Science (Alone) is Never Enough.”

On Saturday, students and teams competed in more than two dozen events, with awards at 4 p.m. in Johnson Fieldhouse. Competition categories include life-personal-social, earth-space, physical-chemistry, technology and inquiry.

Competitions were held in six UW-Stout buildings, along with the university’s outdoor track.